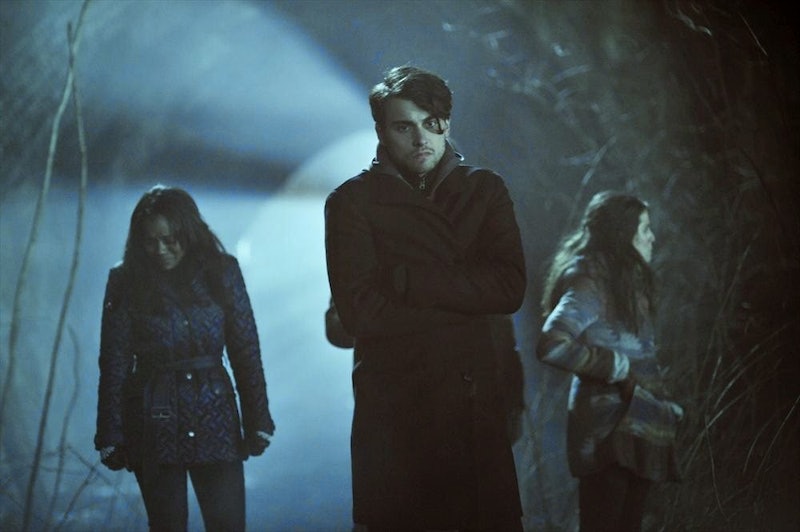 There's no denying that ABC's How To Get Away With Murder, the latest drama from Shonda Rhimes's hit factory, is the most addictive new show of the year. Every week, viewers all over the country have been trying to unravel the thriller's tangled plot threads, from "Who killed Lila Stangard?" to "Who killed Sam Keating?" to "What's up with the scratches on Wes's wall?" to "Where is Michaela's wedding ring?". At times, we've been so focused on solving the mysteries of the past that we've forgotten to look to the future. But as of the midseason finale, HTGAWM has officially caught up with its attention-grabbing flash-forwards... which means that, for the first time ever, we truly have no idea what's coming next.

We now know who killed Sam. (It was Wes, with a little help from Michaela, a rickety bannister, and gravity.) We still don't know for sure who killed Lila (although the show wants us to assume it was Sam – which means it almost definitely wasn't). But more interesting than that question, to me, is: How will the students cope with what they've done? And will anybody else be shuffling off this mortal coil before Season 1 comes to an end?

An astute writer at Vanity Fair recently pointed out the striking similarities in the plots of both How To Get Away With Murder and Donna Tartt's The Secret History. The 1992 debut novel from the acclaimed author of The Goldfinch also revolves around a small group of devoted students hand-selected by a prestigious professor who find themselves embroiled in a series of nasty murders.

(Warning: potential spoilers for Tartt's novel to follow! ...Even though it's been published for 22 years.)

In History, Richard Papen is our Wes Gibbins, the newcomer who finds his way into a group of classmates under the sway of Classics professor Julian Morrow. Like HTGAWM, the novel begins with a murder, and it spends the majority of its length leading up to said murder, revealing how and why it took place and who committed it. Unlike ABC's show, the victim in History is not the professor's spouse, but rather one of the students. But also like HTGAWM, there turns out to be another killing that took place before the opening murder that is directly related to the one that came after. And, before the novel is done, a third life has ended, which begs the question: Who's next to die on HTGAWM?

Elise Taylor, the author of the Vanity Fair article, has Asher marked as her prediction, based on the events of History. She argues that Asher is very similar in a lot of ways to Bunny Corcoran, the victim whose death opens the novel. "Both characters, with their privileged backgrounds, obnoxiously loud mouths, and homophobic/sexist outlooks, are barely tolerated by their groups," she argues. "They also, most importantly, are blatantly excluded from the events of the first murder."

Not only are Asher and Bunny similar in personality, but in how they are (or might be) killed. Bunny learns how one of the students, Henry, accidentally killed an innocent farmer during a pagan ritual gone wrong (which Bunny wasn't a part of) and then the whole group covered it up. Bunny blackmails them until they grow so sick of him they decide to kill him... which Henry does, by shoving him off a cliff.

Will Asher learn the truth about what the Keating Five did on the night of the bonfire? Will he hold it over their heads until one of them snaps and decides to tie up that particular loose end? This seems very possible — my colleague wrote an article two weeks ago about how Asher may be next to die — but in my mind, Asher dying would be a little too predictable at this point. There are two other targets who would be even more surprising...

One of the most prevailing HTGAWM theories prior to the midseason finale was that Bonnie, Annalise's right-hand woman, was the one who killed Sam in a fit of jealousy. That theory turned out to be wrong... but what if we all just had the icy blonde pegged for the wrong murder? What if Bonnie killed Lila? She had the motive: she was in love with Sam. She had the means: she knew he was having an affair. She had the skill: she'd been learning how to get away with murder for years from the woman who literally wrote the book on the subject.

If Bonnie is Lila's murderer, then that doesn't bode well for her. In History, the final character to die is the one who committed the initial murder: Henry Winter. Overcome by his guilt (he killed the farmer, murdered Bunny, and caused the dissolution of his group), Henry commits suicide during a climactic confrontation with his former friends. He even shares a very similar name with Annalise's number two. Does Bonnie Winterbottom = Henry Winter? If so, will she take her own life by the end of the season?

In History, the same man committed both murders — but in HTGAWM, we have two murderers (unless Wes also killed Lila... but that would be one twist too far, even for Shondaland). As the one who killed the show's equivalent to Bunny, "the puppy" is just as marked for death as Bonnie if the writers follow Tartt's outline. And Wes's death would undoubtedly be the most shocking of all, which almost makes me think that's what creator Pete Nowalk is working towards.

It would make for a compelling arc: Wesley arrives on campus as the naïve audience stand-in; he quickly rises to prominence in Annalise's class; he's corrupted by his newfound power and love for Rebecca and becomes a murderer; this just as quickly leads to his fall and ensuing demise. It's a fairly straightforward rise-and-fall arc, but one typically reserved for villains, not bright-eyed law students... which would make it all the more surprising. Not to mention the fact that the death of Annalise's frenemy/protege and her complicity in his fate would give Viola Davis one heck of a compelling motivation going into Season 2.

Will How To Get Away With Murder claim the life of Asher? Bonnie? Wes? All of them? We'll find out when the show returns for its second half on Jan. 29, 2015.