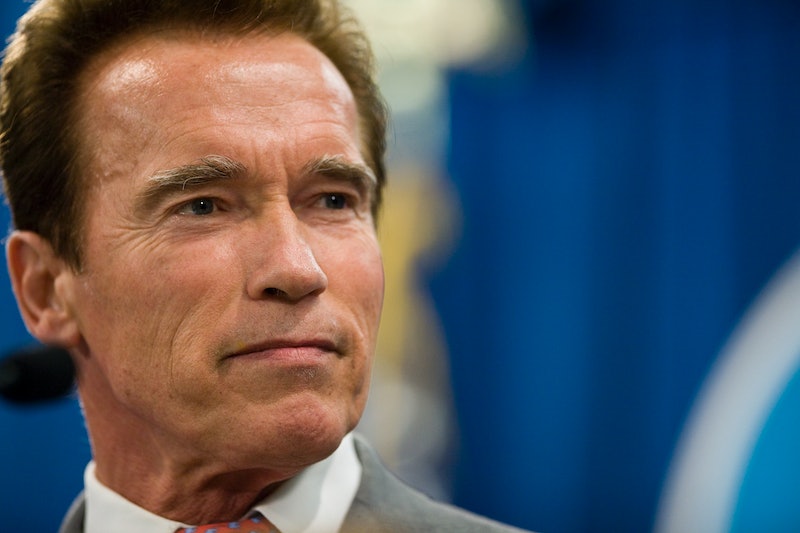 BOOM! SMASH! POW POW POW! GUNS! MAN VS. MACHINE! IT'S THE END OF THE WORLD! WE HAVE TO GET OUT OF HERE! This folks can only mean one thing, the next iteration of the Terminator franchise is almost upon us. The trailer for Terminator Genisys has just been released and from what I gather of the rather, shall we say convoluted plot, is that Arnold Schwarzenegger is back and he's going BACK in time to kill The Terminator and save the world, which of course would be impossible without Sarah Connor.

There also appears to be an army of people machines that LOOK like people, but are actually machines and oodles of that silver-transforming goo a la The Secret World of Alex Mack . Did I mention along with the return of Arnold, Sarah Connor is being played by Khaleesi herself Emilia Clarke? Oh yes, this movie lit-terally has everything an action movie needs.

It also just might be every action movie ever made. From the stunts to the plots, to the subplots and even the wardrobes, Terminator Genisys is like the Transformers of action flicks. It takes parts of every successful franchise (self included) and packs it in to create MEGALOTERMINATOR-ATRON-1000.

First, take a look at the trailer:

Then, see how it has all of the best (or awesomely worst) parts of all of these action films:

We all remember this Keanu klassic.

Which Also Happens on the Golden Gate Bridge

I'd consider The Terminator a mutant of sorts, too.

Is Sarah Connor in the Matrix? WHOA.

Time Travel in Which A Man Goes Back to Kill Himself

The CGI Double Arnold just must be creepier than JGL with Willis' face.

What's an action movie if the end of the world isn't at stake?

And The Terminator's Best Catch Phrase

If you wanna live, come on!...OH COME ON WITH THAT.