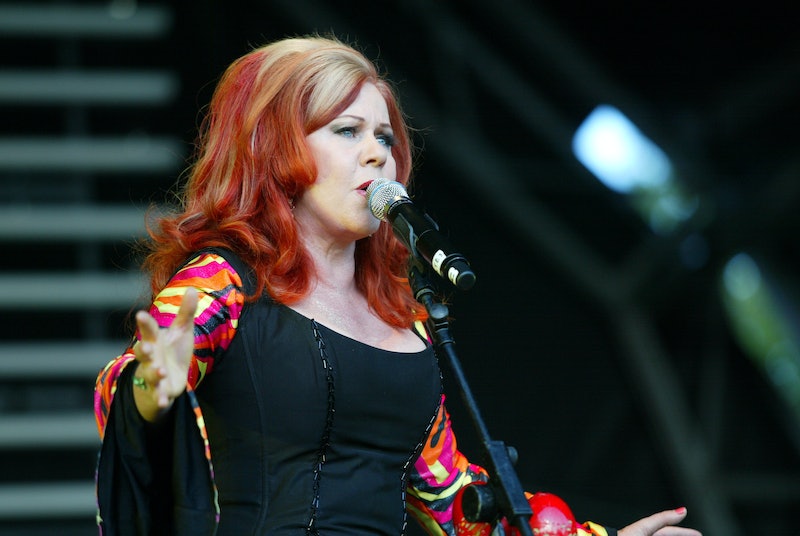 Earlier this week, Kate Pierson, the big-voiced redhead best known for co-founding new wave/alternative/rock group The B-52s, released a single from her upcoming solo debut due out in February. Pierson's song, titled "Mister Sister," features Fred Armisen of SNL and Portlandia fame, and is described by her publicists as "a poetic love letter of the power of transformation — welcoming the freedom to live (and dance) and daring to transcend gender boundaries."

In an interview with The Huffington Post, Pierson says, "'Mister Sister' is inspired by all who are transgender and LGB, multi-dimensional and still transcending." She later added, "I hope it becomes a trans anthem, but it's really meant to empower anyone who feels 'betrayed by the mirror.'"

The most apt way to describe the song is simply to say that it sounds like The B-52s without Fred Schneider, but that's more or less expected. It's a fun if not formulaic retro pop-rock track; fans of Pierson and The B-52s are likely to enjoy it, though it feels a bit too rushed and unpolished to make a mainstream splash, let alone become an "anthem."

Immediately, the song begins with a fundamental misunderstanding of trans people. If, as she tells The Huffington Post, she wants this song to be a "trans anthem," shouldn't the song actually reflect trans identities? What Pierson appears to be describing is a person who isn't inclined to adhere to gender norms. While many trans people do fall into that category, there are many who don't. This verse is concerning gender expression, not identity.

Secondly, the line, "You raid her closet for fishnets" conjures up fetishistic imagery and ties being trans with appearing hyper-masculine or hyper-feminine. This concept is used by many as a means to deny the existence of trans people.

Hey mister sisterYou raid her closet for fishnetsIt's lonely, but you keep wishin'I know there's no one who listens

On numerous occasions, people have asked me why I, as a transgender woman, can't "just be a feminine man," and why I feel I need to "change [myself] instead of just accepting who [I am]." This tactic is frequently employed by trans-exclusionary, "gender-critical" radical feminists as a means to argue that trans women are really just "feminine men" and trans men are really just "masculine women." This argument is a favorite among those who want to exclude trans women from women's spaces. Speaking as an individual and a transgender woman, I don't feel that I'm particularly feminine. My gender identity is female, yes, but my gender expression often lands somewhere around androgynous. Basically, it's important to remember that one's gender identity is not necessarily tied to how masculine or feminine they look or act — something "Mister Sister" seems to miss.

The song's chorus reinforces this concept, playing up the protagonist's appearance and finding relief based solely on whether or not they look "beautiful." The concept of feeling "betrayed by the mirror" is a common trans trope, nearly as overused and unrelatable as the "trapped in the wrong body" idea — while some trans people feel "trapped in the wrong body" or "betrayed by the mirror," a vast many don't.

Not only do these lyrics oversimplify what it means to be trans, but they send a particularly anti-feminist message that one's worth can be determined by whether or not they're conventionally attractive.

The final verse is, for me, the nail in the coffin of this song. The protagonist changes her name from "something Biblical" to "Debbie Delicious?" Really? Also, what does being on "everyone's party wishlist" even mean?

As that verse and the final refrains of the chorus play out, Armisen jokingly holds up pieces of lingerie to himself while he pantomimes the lyrics. In the context of this song and video — which again, I stress, Pierson wants to become a "trans anthem" — the "man in a dress" humor doesn't fit.

Fred Armisen in the video for "Mister Sister"

It should also be noted that the video features Alyson Palmer, a frequent performer at the controversial, trans-exclusionary Michigan Womyn's Music Festival. In a 2011 letter to MWMF performers, Palmer dismissed the idea of allowing trans women to attend the festival.

"Anyone who truly understands the suffering of sexual harassment and abuse; the constant small violations and dark steady threat of even larger ones; the savage horror of rape or any of the sick tortures that the penis-proud wield so easily against women and girls of every age, would rise up and DEMAND that [womyn born womyn] have earned the right to a place in which to cling to one another and heal," Palmer wrote. "To parade the dangling tool of the oppressor in the face of a woman who has been debased is unconscionable. The insensitivity of trying to force the victimized to get over it already so someone else can party woot woot is an insulting layer of fresh misogyny. It is selfish, it reeks of entitlement and it is cruel."

Referring to trans women as "penis-proud" and claiming they "parade the dangling tool of the oppressor" is beyond offensive. To feature her in a "trans anthem" is unbelievable and much like having someone from the National Organization for Marriage appearing in a "gay anthem" video.

I reached out to Pierson's representatives for comment, but I've yet to hear back. I'd hoped to learn whether any transgender people were actually involved in the songwriting process, but sadly, that question remains unanswered.

Reading about this song and video on LGBT websites only demonstrates how uninformed even LGB individuals can be on the topic of trans issues.

"You know from the get-go that there’s something fun, beautiful and queer about a new song by a founding member of the iconic Georgia party band The B52s," Mike Fleming writes at Project Q Atlanta . "Get ready to love the new queer anthem video by Atlanta’s own Kate Pierson."

Neither notes any of the more problematic elements of the song, instead showering it with unquestioned praise.

"Fun," "exciting," "queer," and "trans anthem" have been used to describe "Mister Sister," and while people are entitled to use whatever terms they'd like, doesn't it seem a bit odd that everyone using the term "trans anthem" seems to be cisgender (non-trans)?

It occurred to me that maybe I was alone in my opinions of "Mister Sister," so I decided to ask other trans people for their thoughts about the song and video.

When I checked in with my trans Twitter followers, the overwhelming reaction from trans individuals was that at best, Pierson meant well, but was ultimately unsuccessful; at worst, the song seems to be an attempt to capitalize on the recent surge in trans visibility. Regardless, one would hope that a "trans anthem" was actually beloved by trans people (or at very least, performed, written, or produced by one).

I've included a number of their responses and concerns. The closest anyone came to praising the song was when someone on Facebook told me that while this song may accurately describe some trans people, it's far from a universally relatable experience.

One of the biggest contrasts between the "being trans is all about wearing pretty clothes and getting dolled up" attitude of Pierson's song and the soberingly harsh reality trans women — particularly trans women of color — can be found by reading some of the grisly accounts of trans women being beaten and murdered. Just this week, 21-year-old Deshawnda Sanchez was shot outside her home in Compton.

Pierson may sing that "nothing hurts when you're a beautiful girl," but stories like that of murdered trans women Sanchez, Zoraida Reyes, Tiff Edwards, Mia Henderson, and Alejandra Leos tell a far different tale.

Further, trans musicians have been churning out content for decades, touching on painful truths and stories about conquering feelings of loss, sadness, loneliness, and frustration. Just in recent years, artists like Laura Jane Grace, Namoli Brennet, and Mina Caputo have put dozens of songs that one could classify as "trans anthems."

Why is it that it takes a cis person to highlight trans issues? From "Same Love" to "Mister Sister," it seems we, as a culture, find it difficult to accept stories first-hand; instead, we're ignored until someone notices us and says what we've been saying for years.

Watch the video for "Mister Sister" below: