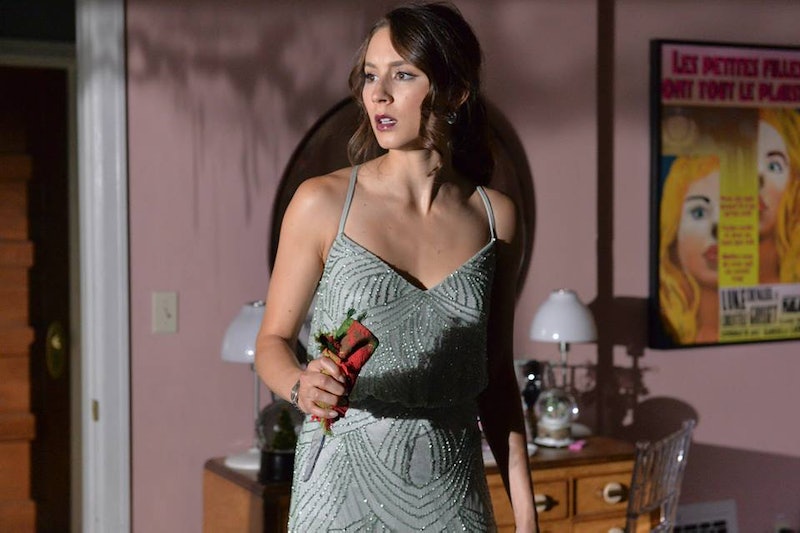 When the term, "it's the most wonderful time of the year" was coined, I doubt anyone thought it would one day also include a Pretty Little Liars Christmas special. But now, the holiday season most certainly does. After the Season 5A finale this past summer, the Liars of Rosewood are in for all sorts of changes, but one of the girls is in a much more dire situation than the others. Spencer seems to be in a lot more trouble than the others, because of that whole "murder" thing. So, in preparation for the holiday episode, here are all the PLL Christmas spoilers you need: Spencer Edition.

For starters, let's remember that she's in the middle of being investigated for murder. While she is generally thought of as the "smartest" of the Liars — between her cunning book smarts, the fact that she pulls out super obscure literary references, and studies way more than everyone else — she managed to really go and louse this one up, huh? Detective Holbrook, always hot on the trail, suspects that Spencer murdered Bethany Young to cover up her drug addiction (with Alison's help). The night of Ali's disappearance is still kind of foggy for Spencer, but it continues to get a lot clearer. Spencer knows she didn't kill Bethany, we know she didn't kill Bethany, but everyone else has yet to catch up. Last we saw Spencer, she was being arrested. Now what?

Spencer is currently out on bail (naturally), but the looming charges continue to hang over her. According to executive producer I. Marlene King's interview with TV Guide, Spencer is the real "Scrooge" of the episode and wants no part of the festivities. That whole, "framed for murder" thing really puts a damper on the holidays.

Mona was in possession of some "information" that could clear Spencer's name from the murder charges, but after her own murder, they're MIA. It looks as if Ali has them, and won't use them for good, but rather evil. So, it's up to the Liars to distract Ali long enough to get the goods. Will they succeed in doing so?

The Hastings Are In Charge of The Ice Ball

And when your daughter is brought up on murder charges, what better thing to do than throw an Ice Ball? It looks like the Harry Potter Yule Ball, but like fifteen times more white and frilly. Plus it will probably be pegged to some charity, since the Hastings love their charity events.

Toby got into a car accident at the end of Season 5A, and is currently nursing a broken leg. Since he can't dance on a broken leg, he opts out of the Ice Ball, leaving Spencer to fly solo for the night. Said Troian Bellisario in the above interview, "she’s on a mission, but she’s also really kind of bummed."