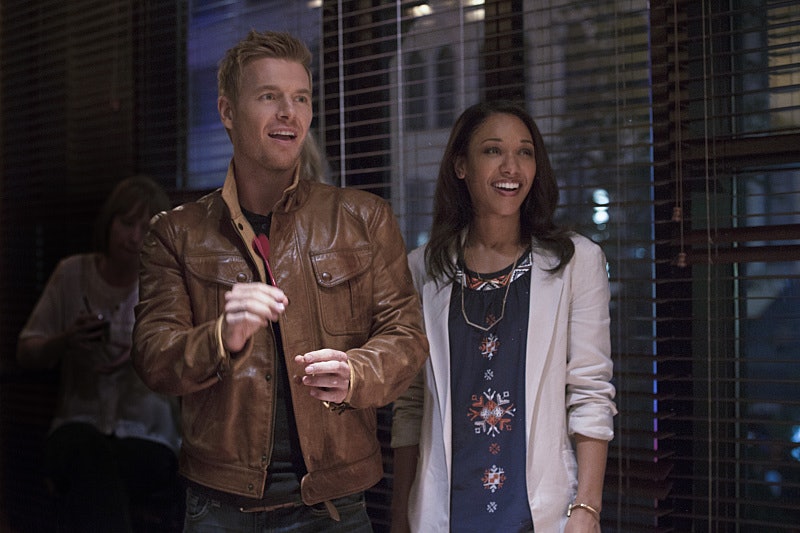 So far on The CW's The Flash, Eddie Thawne has proven to be a good-looking, well-to-do golden boy detective. Sure, he's romancing Iris, the daughter of his detective partner Joe West, but can you blame the dude? She's a cool, smart, gorgeous woman. But is there more to Iris' boyfriend than just a nice smile and flawless moral standing? Comic book fans recognized early on that Eddie shares the last name with Professor Zoom, the second villain to take on the mantle Reverse-Flash. Professor Zoom, who I'll call Reverse-Flash because it sounds just a bit cooler and is most likely what Cisco will dub the character on the show, is Barry Allen's most devastating foe. He's brutal, obsessive, and more than a little crazy. But could Eddie Thawne be the Reverse-Flash we see in the midseason finale, "The Man in the Yellow Suit"? Or is his last name just a clever red herring?

There is little evidence pointing to Eddie as the Reverse-Flash, and it is going to take a lot to convince me Harrison Wells isn't the villain, or at least extremely connected to him in some way. Eddie did have a weird turn from not believing in The Flash to getting a task force approved to hunt down the superhero. And this all happens before The Flash beats the hell out of him while sort of under the influence of the metahuman Prism. But I do believe The Flash writers have made Eddie such a squeaky clean character to throw off audiences.

When Deadline announced that Rick Cosnett was cast as Eddie Thawne, the character was given an interesting description as a "recent transfer to the Central City Police Department, whose past is a mystery and harbors a dark secret." This doesn't align with the Eddie we've seen thus far. He seems like a pretty upstanding guy, but if this description is anything to go on, that will definitely change.

In an interview with The Hollywood Reporter, Rick Cosnett described Eddie as "very much the opposite of Barry." He continued to say that "the audience is very much in the dark" when it comes to the mystery behind Eddie. We definitely know next to nothing about Eddie, but him suddenly turning out to be Reverse-Flash would be too dramatic of a shift in character. It would just be unbelievable and needlessly cruel, since in the comics this Reverse-Flash kills Iris shortly after she marries Barry. What's more likely is that Eddie isn't who he claims to be.

In an interview with Comic Book Resources, Cosnett discussed the Allen/Thawne family feud and said, "It was fascinating to me, and I think the family lineage — they're quite wealthy and they're from this old money world of deep, deep dark secrets. It's also fascinating with the whole Barry's twin [storyline], and who that is and who it's going to become." Does that mean Eddie could be Barry's twin, who in the comics was raised by the Thawnes after being stolen at birth and becomes known as Cobalt Blue?

Without some heavy tinkering, I don't think that reveal would work either. I definitely get the impression that Eddie is a con-man, because his golden boy image just seems a bit too flawless. But based on everything we've seen thus far, Harrison Wells is more likely to be Reverse-Flash than Eddie. Tuesday night's midseason finale will put Barry Allen's arch nemesis in the spotlight, but the writers are going to take their time revealing who is behind the yellow mask. I wouldn't put it past The Flash to be giving us red herrings, but until we get a shred of proof, rest assured that Eddie isn't Reverse-Flash — though he definitely has secrets.