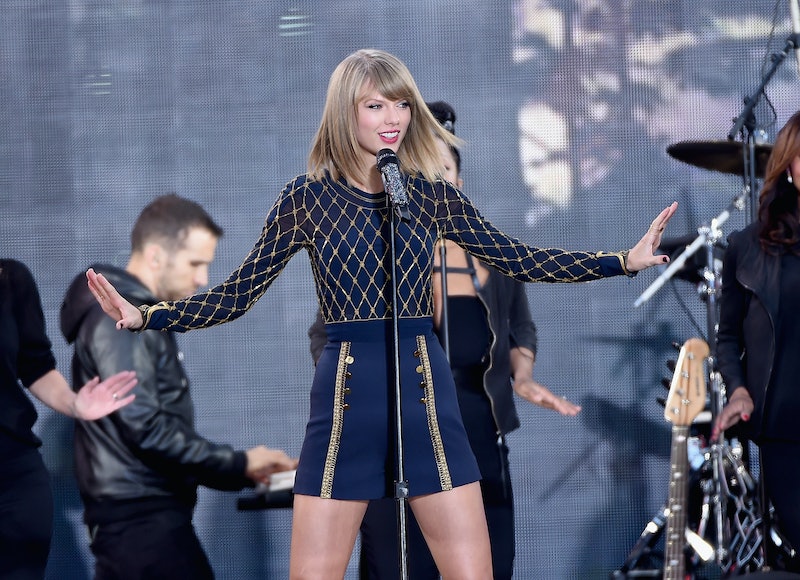 Over the weekend, flaxen-haired angel Taylor Swift headlined London's Capital Jingle Bell Ball with a "significant case" of laryngitis. Not only did she sound perfectly respectable, she played it off like a champ, remarking earlier in the week, "This is the best time I've ever had while having laryngitis, I can tell you that." It just makes you grateful that some women will fight through the pain to put on a great show.

Think about how frightening it must be when you're a performer, and the elements — be it acquired or self-inflicted — work against you to complete your job. That's hard enough when your job description is to stay in bed all day, clad in yoga sweats, and wax philosophically about pop culture. How do you endure a cold when you get paid to put on your tightest bedazzled hot pants and sing to 20,000 people while exercising the most elaborate of choreography? What about a sprained ankle? Or an upset stomach? Or a swan dive off the stage? But some women do it, and they deserve the highest of praise.

Listen to Swift's admirable performance below, and then relive the stories of seven badass ladies that insisted that the show must go on.

Who can forget earlier this year with Azalea fell off the stage off a pre-VMA show and not only continued rapping, but posted a video of it? While Azalea didn't sustain any significant injuries, such a thing would've plummeted most people into a flustered dirge of embarrassment. By laughing at herself, Azalea came across like a boss.

You probably remember Gaga's questionable vomit performance art, right? Well, that's nothing compared to the time when a very sick Gaga threw up at a Barcelona show four times ... and then kept dancing. Later they threw sausages at her because she gained weight. The entire thing was, in a word, screwed up, but bless her for taking it in her stride.

Perry had some sort of dramatic injury due to some "overenthusiastic dancing" at a club, which sounds borderline adorable until you realize she sustained 17 stitches from the accident. She tweeted to her legions of fans, "Don't make fun of my dance moves tomorrow. That's what got me here in the first place!" Ha. Ha. Sure enough, she performed at the MuchMusic Video Awards just a few days later, leg cautiously bandaged, clad in a plastic dress with candy cane striped booties. I would expect nothing less.

Stefani was pregnant during her Harajuku Lovers tour (dark times, dark times) and it was no walk in the park. "I would want to throw up during certain songs. Certain outfits would make me sick. It was torture. I toured until I was four-and-a-half months pregnant, showing," she told Vogue. However, she battled through her morning sickness and put on shows that were consistently colorful and exciting, if not a touch racist.

Madonna was slated to perform "Same Love" with Macklemore at the Grammy's earlier this year, yet a freak high heels accident (seriously) left with a minor injury, and her appearance in question. But let's be honest, Madonna doesn't half-ass anything. Before the Grammy's she announced via Instagram, "It's official! I'm off my crutches and I'm looking for the perfect pair of heels to wear to the Grammys." All hail.

I think we like to think of Beyonce as eternally #flawless, but I'll admit, I feel a sense of comfort knowing she pulled an Iggy Azalea during the last stop of her Mrs. Carter World Tour. As in, she fell down a flight of stairs. Or rather UP a flight of stairs, which is actually the kind of hysterically awkward nonsense I usually pull. Either way, she bounced back instantaneously.

Nothing will ever compare to the moment when M.I.A. performed at the Grammy's nine months pregnant, on her due date, no less. Everyone else can go home.

More like this
Everything To Know About Taylor Swift’s 10th Studio Album, 'Midnights'
By Grace Wehniainen and Jake Viswanath
Taylor Swift Wants To Direct A Movie Next — But You Might Have To Wait
By Radhika Menon
'Selling Sunset's Vanessa Married Her British Beau Nick In A “Fairytale” Wedding
By Darshita Goyal
Twitter Is Freaking Out Over Rihanna’s 2023 Super Bowl Halftime Show Announcement
By Stephanie Topacio Long
Get Even More From Bustle — Sign Up For The Newsletter