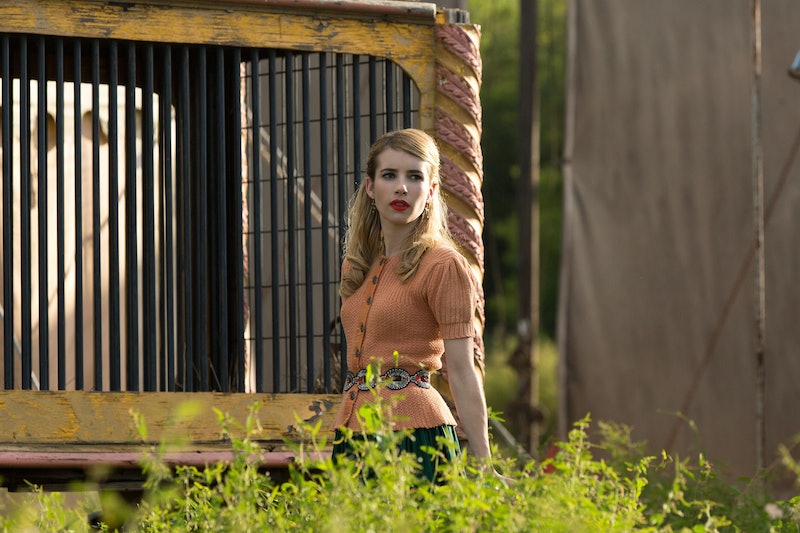 Freak Show's unconventional but ever-intriguing cast of characters is dwindling down to nothing and if American Horror Story does anything the right way, it's death — so you know we're in for even more loss in the few remaining episodes. But if there's one duo I'm fairly confident is safe this season, it's the leading romantic couple Maggie Esmerelda and Jimmy Darling. The eighth episode left Jimmy in a drunken stupor, casting Maggie away in his despair. And even though Maggie unwillingly accepted his dismissal in tears of despair almost equal to his own, I can't help but wonder if it was an act just like everything else she's done. I have every confidence in Jimmy that he'll pull through and get the girl in the end, but I'm not sure her feelings are as genuine as she lets on.

Every once in a while Maggie does something to alter my distrust of her — like her refusal to harm the freaks, or looking past Jimmy's deformity to see the hero he really is. But all of these actions could have also triggered an ulterior motive: using Jimmy's strength, leadership and genuine feelings for her to escape Stanley's threats to harm her if she doesn't do as she's told.

On the one hand, I can't imagine after all we've seen from their relationship that Maggie doesn't have some form of feeling toward the lobster-limbed boy. Despite his unusual living circumstances, Jimmy is a good-looking man around Maggie's age with a huge heart and strengths in love and leadership that would make any girl swoon. If rescuing complete strangers from a murderous clown (or two) didn't do trick, the underlying struggle with his family that he overcomes every day would have swayed me. And yet, Maggie once again betrayed Jimmy by lying about his mother's death.

Even though the official scene was left out, the assumption is that Maggie went along with Stanley's plan to allow the camp to believe Ethel Darling's death was not an accident. Her actions can only mean two things: that Stanley is still threatening her and that her own life is more important to her than her so-called true love's. Jimmy's despair stems from the disbelief that his mother could selfishly take her own life and leave him motherless and Maggie is doing nothing to convince him otherwise. Sure, he has his father now, but not for long if Ma Petite's murder is ever brought to light. Maggie owed Jimmy the risk, no matter the cost.

Maggie wouldn't necessarily dump Jimmy the minute they're free of the camp, but that doesn't mean that she isn't taking advantage of him. Maggie proved she had some semblance of a heart when she attempted to rid herself of Stanley's evil plan, but he has a power over her that might only be stopped by disappearing without a trace. And with Jimmy, she saw a guy who she could easily seduce, who wouldn't dare turn her away if he was smart. It's possible that using Jimmy as a shield is Maggie's only chance of having a real life, regardless of the sincerity of her feelings.

It isn't a horrible plan if I'm being honest — Jimmy deserves a shot out in the real world with a beautiful girl, especially now. If nothing else, the theory would make Maggie's constantly nagging him about leaving make sense. But Maggie better hope he doesn't find her out. Spoilers reveal a synopsis that has Desiree suspicious of Maggie for one reason or another, so it looks like the truth will come out sooner rather than later. Keep in mind, before Ethel was killed she told Elsa she had written a note to Jimmy, and it will likely expose Elsa's, and therefore Maggie's, lies.