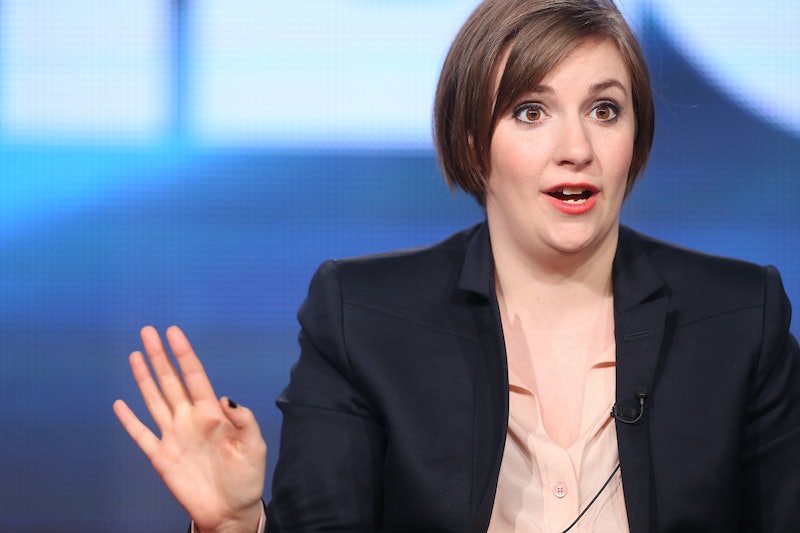 Can we bring back Chris Crocker one of these days to redo the infamous "Leave Britney Alone!" video, except this time he can plead for people to leave Lena Dunham alone? Following a threat of litigation surrounding the essay in Not That Kind of Girl that discusses her sexual assault, Dunham penned a BuzzFeed op-ed and talked about her decision to write about her reported rape. She is 100 percent spot-on.

In the BuzzFeed piece published on Tuesday, Dunham responded to the latest controversy surrounding her widely discussed and even more widely critiqued memoir, Not That Kind of Girl. To avoid litigation, Dunham's publisher Random House agreed to revise her essay "Barry," in which she chronicles the night of her alleged rape by a fellow student at Oberlin College. A man who fits Dunham's description but claims to have never met Dunham is currently crowdfunding his efforts to sue Dunham and Random House for libel. Dunham begins her op-ed by apologizing for the "Barry" ordeal, saying that "any resemblance to a person with this name is an unfortunate and surreal coincidence. I am sorry about all he has experienced." That is, quite frankly, the only apologizing she needs to do in this situation.

Then, she gets into the meat of things. Responding to the outpour of media backlash since the "Barry" case broke earlier this week, Dunham eloquently parses the inherent misogyny in the way that she has been treated during the controversy. She begins by talking about her intentions in writing the essay:

Speaking out was never about exposing the man who assaulted me. Rather, it was about exposing my shame, letting it dry out in the sun. I did not wish to be contacted by him or to open a criminal investigation. I am in a loving and peaceful place in my life and I am not willing to sacrifice any more of it for this person I do not know, aside from one night I will never forget. That is my choice.

Inspired by the millions of brave women who are coming forward with their own accounts of sexual assault, Dunham felt compelled to stand up. Her story, in particular, focuses on campus rape, which has been an extremely hot-button topic this year.

With numerous well-publicized cases of young women coming forward to talk about their experiences, fighting back against their assailants, and critiquing the college justice systems that have grossly mishandled their claims, it seems that sexual assault is being swept under the rug less and less. People are acknowledging that it happens everywhere. Dunham's account is another valuable story in the anthology, and it reminds us that survivors shouldn't be considered "guilty until proven innocent." She continues:

Survivors are so often re-victimized by a system that demands they prove their purity and innocence. They are asked to provide an unassailable narrative when the event itself is hazy, fragmented, and unspeakable. They are isolated and betrayed by people close to them who doubt their reality or are frustrated by their inability to move on. Their most intimate experiences are made public property.

The backlash that Dunham has received, she believes, was in keeping with the way society treats rape survivors: with misogyny, victim-blaming, and skepticism. She says:

I have been attacked online with violent and misogynistic language... My work has been torn apart in an attempt to prove I am a liar, or worse, a deviant myself. My friends and family have been contacted. Articles have heralded “Lena Dunham’s shocking confession.” I have been made to feel, on multiple occasions, as though I am to blame for what happened.

And then, she reaches the clincher:

I simply cannot allow my story to be used to cast doubt on other women who have been sexually assaulted.

And there it is, for the patriarchy-busting win! This attempt to discredit Dunham's account can undo all the positive things about her coming forward and sharing her story. Women (or men) who were previously inspired to come forward after identifying with Dunham's ordeal could potentially see the way things are unfolding for her and think, What if my honesty backfires?

That's why this controversy should be viewed critically; Dunham's most salient points about misogyny and victim-blaming are being reinforced by this legal aftermath. Sure, the coincidence of the "Barry" character is unfortunate, but this one element of the story shouldn't be used to devalue her confession as a whole.