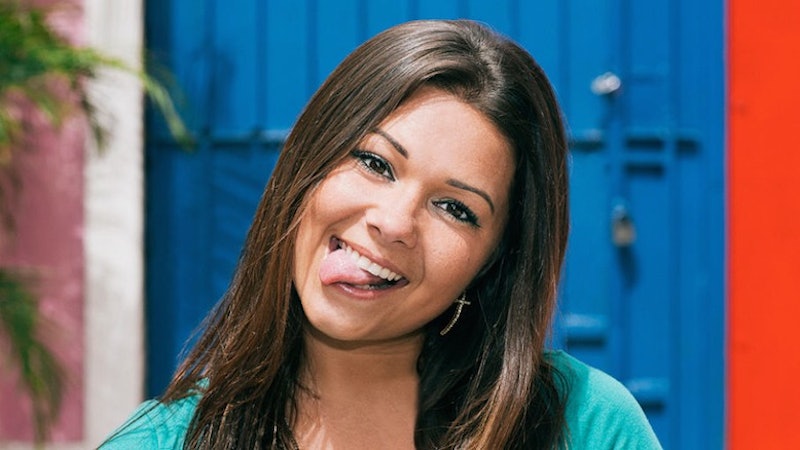 While I may not have loved some of the bros who stole her heart, Ellie from Are You the One? stole my heart over the course of this season. I don't know that I've ever seen one woman have such an affinity for remaining confident in the face of rejection... a lot of rejection. Though Ellie and Nate were bickering like brother and sister by the time they knew they were a perfect match, at one point she was getting all warm and fuzzy about him, even though he was insisting things were strictly platonic. But she was already familiar with that story, as Anthony has been putting her in a best friend headlock all season, while she was ready to lock him into a marriage certificate.

No, it seems that everyone on Are You the One? could only see Ellie as a little sister, which is absurd because she curses like a sailor and makes Snooki seem discrete. Ellie was cute and hilarious and just playing on another level from everyone else. But she got her money, she got the last word on Nate, and my hope is that she makes her way to The Challenge , casts a spell over Dustin Zito, and the ultimate MTV country baby is born. For now though, it seems that Ellie is just taking it easy since her time on the series ended.

A quick look at Ellie's Instagram will tell you that she is looking very different these days. Maybe it's just the glamour that comes with being an MTV reality star, but she's almost unrecognizable in some of her photos.

Don't worry though... glass of rosé inside a Fatz bathroom? It's still Ellie.

Taunting her Perfect Match (And Us)

The way that Ellie and Nate laughed through their whole "fight" at the final ceremony made me think that they weren't really mad at each other, just having a good time antagonizing each other, a habit that has not changed since the AYTO? finale.

She's also been antagonizing her fans with mysterious tweets about love, though.

Who you talking about, girl? No — could Nate really have been The One?

In MTV's greatest reality TV tradition, many of the AYTO? cast go on to illustrious careers in meet-and-greets and bar appearances. Ellie is one of those people and with her personality, she's undoubtedly bringing a good time to the table.

Tune into the Are You the One? reunion on Monday night to get to the bottom of all of those cryptic Nate messages.

More like this
Here’s What 'Sister Wives’ Star Christine Brown Has Been Up To Since Leaving Kody
By Grace Wehniainen
Where Is Former Bachelor Host Chris Harrison Now & What Is His Net Worth?
By Hugh McIntyre
'Survivor' Is Finally Coming Back To UK Screens
By El Hunt
The Bling Ring's Alexis Neiers Has Come A Long Way Since Her 'Pretty Wild' Days
By Sophie McEvoy and Arya Roshanian
Get Even More From Bustle — Sign Up For The Newsletter