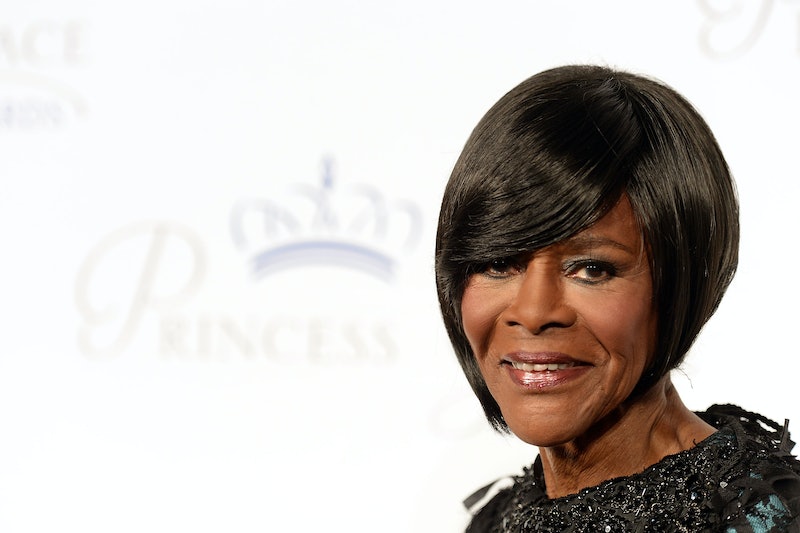 Television's winter hiatus has only just begun, but that doesn't mean we can't still get a taste of what's to come in the New Year. For example, on Monday, it was announced that the legendary Cicely Tyson will guest star on How To Get Away With Murder during the second half of the ABC hit's freshman season. This is particularly exciting not only because Tyson is an amazing talent, but because this gig will serve as a bit of a reunion between her and HTGAWM 's leading lady, Viola Davis. If you recall, the two stars worked alongside each other in the widely successful film The Help. So to see these two on camera again once more should prove to be an absolute delight. (You know, aside from all the inevitable murdering happening around them.)

As it stands now, the actress is only scheduled to appear in one episode in the coming year, however, that's not to say things can't change depending on where the story arc takes us. Speaking of which, we have absolutely no idea where exactly Tyson fits into this murderous Shonda Rhimes tale. Both Rhimes and the network are choosing to cloak this character in mystery, which makes me think there's more to this one-off appearance than meets the eye. So I thought now would be as good a time as any to try and predict how Tyson will fit into Annalise Keating's world.

She Is Annalise's Mother

On the one hand, this seems like the obvious choice, but on the other it may be too good to be true? But regardless, this would certainly make a lot of sense given that Annalise's husband has just died. Naturally, if her mother is around, she'd be in attendance for the funeral and to comfort her daughter in her time of need. Personally, I would love to see where Annalise gets her no-nonsense spunk from. I'm betting it's from her mother's side and I'd love to see that dynamic in action.

She Is a Client

Then there's the chance that, given her one-episode-only status, Tyson's character is a client who hires Annalise & Co. to represent her in court. Whether she's guilty of the crime or not, I'm sure we'd get a look into her background and see just what got her into this terrible predicament. It's not as exciting as a family relation, mind you, but the performance should still prove to be satisfying (it is Tyson, after all) and give us something else to think about aside from the whole Sam situation.

She Is Wes' Grandmother

Just as intriguing as it would be to see a relative of Annalise's come out of the woodwork, the same can be said about Wes' family. We don't know much about his background, but if his grandmother were to pop by for a visit to see how her grandson is adjusting to law school, things could certainly get interesting. (Well, let's see, I've done a little studying, appeared a few times in court, oh, and I murdered someone. But all-in-all, I'm great!)

But no matter who she ends up playing, one thing is for sure — Tyson will prove to be a killer addition to an already A-list team.

More like this
The BBC Is Adapting A Best-Selling Novel About A Mistaken Killer
By Darshita Goyal
Jonathan Bailey's Latest Role Is A Huge Departure From 'Bridgerton'
By Sam Ramsden
Nicola Coughlan Shared A Lady Whistledown Excerpt From ‘Bridgerton’ Season 3
By Grace Wehniainen, Alyssa Lapid and Sam Ramsden
'Elite' Season 6 Is Arriving Sooner Than You Think
By Gretchen Smail and Grace Wehniainen
Get Even More From Bustle — Sign Up For The Newsletter