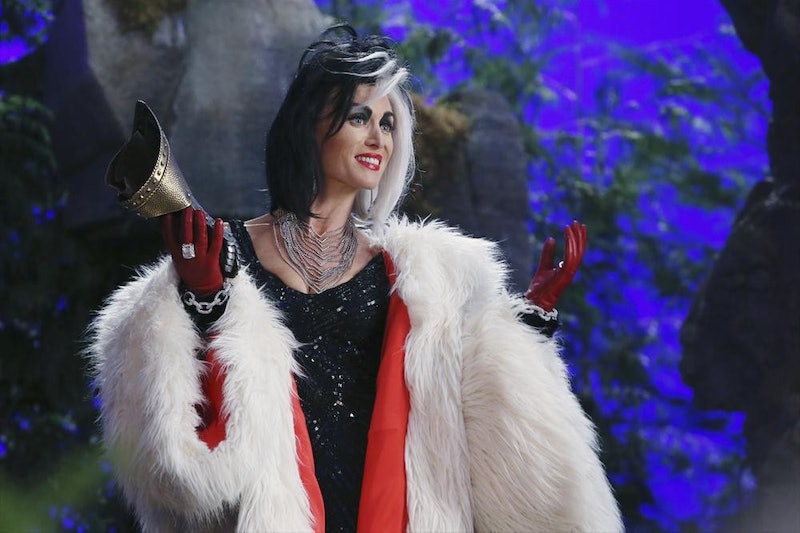 And they all lived happily ever — NOT SO FAST! Once Upon a Time 's midseason finale may have incorporated many different twists and turns, but none of them proved to be greater than the introduction of this season's newest big bad — or should I say big bads — in the form of Disney's three iconic Queens of Darkness: Cruella De Vil, Maleficent, and Ursula. Yes, these ladies want a happy ending for themselves and they want it right now. Luckily, a certain gold-spinning Dark One may have the know-how to make it finally happen.

At the end of the hour, Rumple managed to track down Ursula, whose present day self was found working in a New York City aquarium because of course she was. And it was there that Rumple divulged his latest scheme. You see, he too seeks to rewrite villainy history and force his happy ending upon the world. However, he cannot hope to do it alone. He needs an evil army at his disposal, which is where these lovely ladies come in. So now that the Sea Witch is officially on board, that just leaves him with two more stops to make before this baddie band can get back together again. But where could Cruella and Maleficent be hiding? I have a few theories in mind…

Cruella Is a Fashion Mogul in Paris

I mean, if Ursula is working at an aquarium, one can only assume this villainess will also be dabbling in an industry very similar to her Disney counterpart. And for a well-dressed lady like Cruella, that means fashion is sure to take center stage in one of the biggest fashion capitals of the world: Paris, France. You just know she and Miranda Priestly would get along famously together. Plus "De Vil" when put together spells "devil," as in The Devil Wears Prada. Coincidence? I think not. Let's just hope Rumple didn't leave his passport back in Storybrooke.

Maleficent Is a Party Planner in Los Angeles

Let's be honest — Maleficent knows full well what it feels like to not be invited to a party (it sucks TBH), so I'm betting she'd seek to right that particular wrong by using her career as a sort of popularity booster. After all, if you're the actual party planner for all the major LA events, then technically you're always invited to pretty much everything and therefore never have to worry about feeling left out. Problem solved! (Either that or she's a professional pilot because of the whole flying-dragon/crow-obsession thing.)

But wherever Rumple and Ursula end up tracking these fellow foes down, odds are it's going to be one hell of a reunion. And I, personally, can't wait to see how it all unfolds. See you in March, ladies!