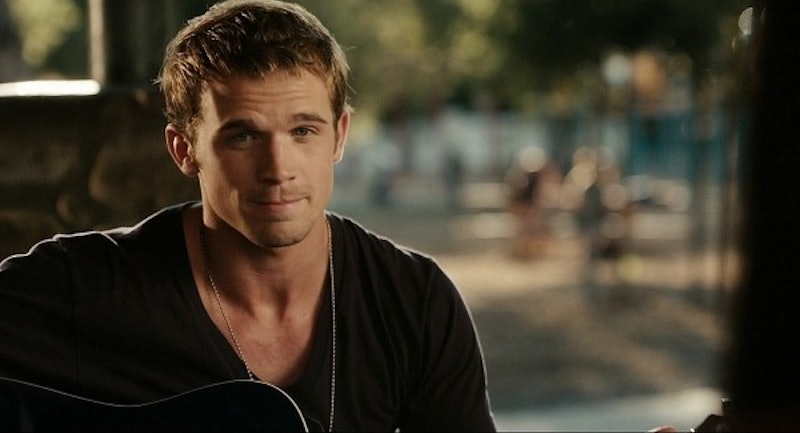 Planning on getting your Lifetime on over the holiday break? Whether you're a fan yourself of will be watching with family, the seductive pull of the network cannot be denied. This weekend's premiere of Nanny Cam features a familiar face — Cam Gigandet. Where do you know this actor from? If you're a fan of young adult anything, there's a good chance you've seen his face and probably his abs before. In Nanny Cam, which is about a working mother who becomes obsessed with watching her new babysitter on "home security" to her detriment, Gigandet plays the woman's husband, Mark Kessler. Do you think there's a support group for actors who play husbands on Lifetime? It never seems to work out well for them, does it? Will the nanny try to seduce the husband, or will she find other ways to torment the Kessler family?

Luckily, this MTV Movie Award Winner is no stranger to campy movies. He often plays the villain, and displays his own tattoos on camera. Gigandet was in the innocent series Jack and Bobby, as well as Pandorum, Priest, and the Leighton Meester thriller The Roommate. However, if horror's not your thing, here's how else you might know the Washington State-born actor.

In pop culture, Gigandet is probably best known for playing James, the tracker vampire who was one of the three villains in the first Twilight movie. His fight with Robert Pattinson's Edward Cullen won a lot of "choice" awards. While the character dies in the first movie, his presence is felt for the whole series thanks to a certain redhead and a whole lot of vampire trouble.

In the teen comedy, Gigandet played Micah, Amanda Bynes' mysteriously older Christian boyfriend who caught an STD from the guidance counselor and blamed it on Emma Stone's character, Olive. We actually got to see some of Gigandet's comedy muscles stretch instead of just his abs.

Right after Easy A, Gigandet could be found in the musical Burlesque, a movie about a magical land where Kristen Bell is the veteran cabaret performer and Christian Aquilera is the wide-eyed newbie. Gigandet played Jack, a waiter at the show and the main love interest. Gotta love a vest and some guyliner.

He's been on the small screen as well. On The O.C. Gigandet played Kevin Volchok, the surfer who ultimately killed Marissa. You know, no big deal. His actions only, in the eyes of many fans, cause the show to jump the shark. Like I said, he doesn't often play the nicest guy.

Recently, Gigandet starred in the CBS summer series Reckless as a Southern lawyer who falls for the Northern litigator in Charleston. Tale as old as time, right? Unfortunately, the series was canceled after only one season. Fortunately, it gave us Georgiana Haig as Elsa on Once Upon A Time, and juicy roles like his upcoming one in Nanny Cam for Gigandet.

More like this
Gabby Petito’s Family Responded To The New Lifetime Movie About Her Final Days
By Grace Wehniainen
20 Photos Of The 'Hocus Pocus' Cast Then & Now
By Radhika Menon
12 ’90s Movie References You Missed In 'Do Revenge'
By Radhika Menon
24 Years Ago, 'Friends' Dropped Its Most Underrated Ross & Rachel Episode
By Grace Wehniainen
Get Even More From Bustle — Sign Up For The Newsletter