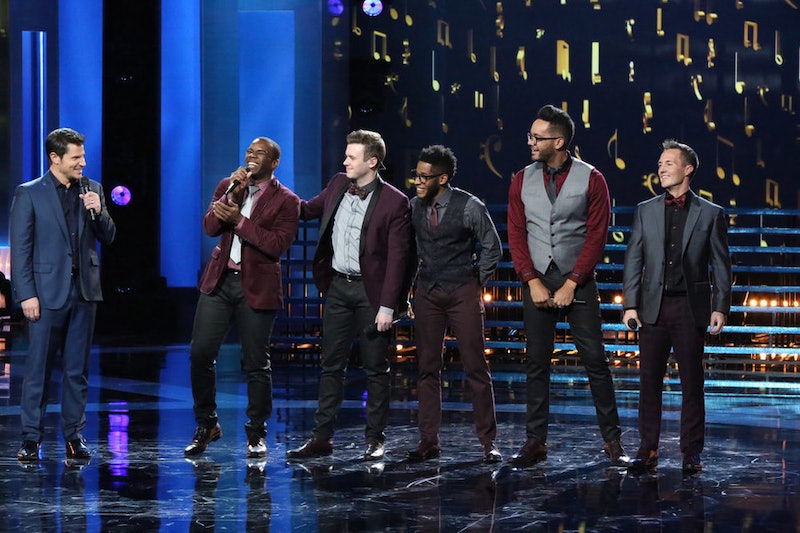 The reality-show stage is an odd place for a musical group to form, but it's not unheard of. One Direction, for example, famously met as solo candidates for The X Factor and when they didn't make it past the audition separately, they teamed up as a group (and just look what happened there). The Exchange is The Sing-Off 's version of One Direction, minus the Harry Styles fangirling. Most of the group's members met on stage on the third season of The Sing-Off as part of different a cappella groups. If you can recall, the third season was the one with Pentatonix, so there was no way any other group was going to win. (And they didn't.)

Still, the future members of The Exchange realized that they could do more if their powers combined. They reshuffled their membership, and five of the guys — Alfredo Austin, Christopher Diaz, Jamal Moore, Aaron Sperber, and Richard Steighner — re-emerged as The Exchange. Once again, they made it under the hot lights of The Sing-Off, this time for the show's fifth season. And... once again they didn't win. But it was a valiant effort, and the group is still performing together and releasing their own music, so maybe they can be the next Pentatonix after all.

Here, the rise and not-quite-fall of The Exchange.

Sperber and Moore performed as members of the YellowJackets, an a cappella group from the University of Rochester. The 15-member group was quite a force to be reckoned with, and they eventually came in seventh place (out of 16 groups, so not too shabby). See if you can spot Sperber and Moore in the crowd above.

Steighner, meanwhile, was in Urban Method — a group that performed even better on the show. Urban Method made it all the way to the finals before ultimately walking away with third place. Heartbreaking!

They Released a Couple of Albums

They didn't let the loss keep them down — in fact, it's what got them going. After the first round of The Sing-Off, the five guys got together and formed The Exchange. They put out two albums together: Get Ready , which is mostly covers, and The Good Fight , which is mostly originals.

The Exchange returned to the fifth season of The Sing-Off a little older, a little wiser. They had more a cappella experience under their belts. They knew how the show worked. They were poised for redemption. And... they still only got second place. D'oh! So close, guys.

It doesn't look like the guys are going to dissolve the group and form new ones in hopes of winning The Sing-Off again. Instead, they'll be joining The Sing-Off Tour with groups like Voice Play and Street Corner Symphony, a lineup that seems aca-awesome.