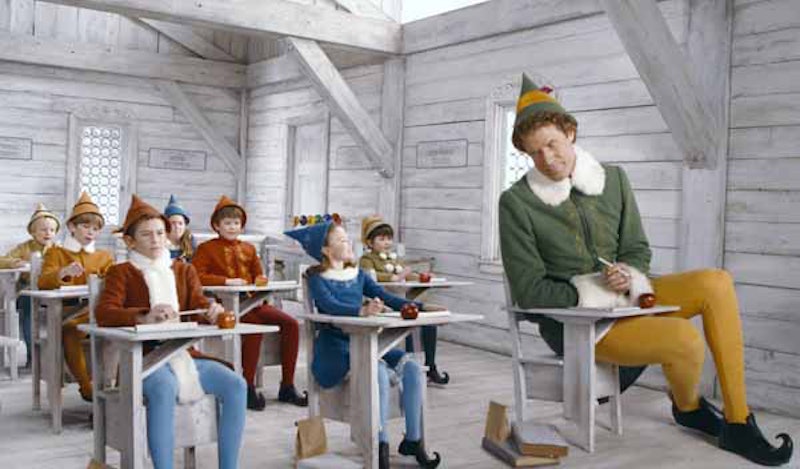 While everyone makes Christmas to be about the trials of Jolly Old St. Nick, it's really the little people that make the day happen. After all, they're the ones working day after day to build your iPhone 6, while the big man in red sits on his ass drinking hot cocoa all day. Elves are routinely demoted to being background characters, and it's nonsense. I recently spent a day as an elf, and rest assured it was a skin-searing, diabetes-inducing experience. Those guys definitely deserve proper recognition, and I'm here to help.

Because the truth is, there's definitely more than one kind of elf. Whether they have cone heads or modern floppy hats, whether they look old and bearded or are a fountain of youth, elves are definitely up to interpretation. I mean, except when it comes to height, although Will Ferrell even puts that into question. You get my point: while a diet of spaghetti and maple syrup may work best for some, there are several strains of elves. And attention must be paid to the differences between these pointy-eared heroes.

In celebration of the season, here's a very quick refresher of various types of elves we've seen in cinema alone.

Technically this is a television special, but we have to look to this OG Christmas classic for their iconic depiction of elves. The stop-motion inhabitants of the North Pole boast round heads, pointed hats and colorful belted coats. Their minds, however, are narrow, and they shun any career choice that doesn't involve stuffing teddy bears. In fact, they throw shade at Hermey for wanting to be a dentist, something genuinely practical. So aside from being aesthetically adorable, they're are pretty much everyone's judgmental aunt at Christmas dinner. "Your cousin Stephen wishes he could be there, but he's doing so great at his new accountant firm that he decided to take an early vacation to Bermuda. Oh, you write lists for a living?" Meh.

Young and Beautiful, The Santa Clause

I've alluded to the fact that the sequels are saturated with CGI Christmas blasphemy, but the original Santa Clause film is a snarky delight. More importantly it has one of the most magical interpretations of the North Pole. It makes FAO Schwartz look like the toy section of Dollar Tree, while still retaining an air of realism. Plus, they have some of the best elves around.

The elves of The Santa Clause break the typical mode by not being stumpy, and cartoonish, and instead they're portrayed by actual children. Not only do they have their own ELF S.W.A.T. team, but they have some intricate, unique threads, everything from velvet berets to embroidered tunics. The elves are youthful, sassy, and almost painfully hip, it's honestly like a Christmassy Williamsburg up in there.

Best part? The Head Elf Bernard is ironically played by the Nice Jewish Boy from Addams Family Values Bernard. Also he's hot and I love him.

Teeny and Precious, The Nightmare Before Christmas

We don't get well-acquainted with the elves in Tim Burton's claymation masterwork. Mostly they just chill in the backdrop while Jack Skellington muses musically about his surroundings. Visually they're round and squat, with peaky, curvy little hats so reminiscent of Burton's style, and they seem perfectly adept at their job. Honestly Christmas Town is another gorgeous take on the North Pole, but we're merely looking at it through the rose-colored glasses over Jack's eyes (er, bottomless sockets). Take those off, and I'm sure you'd discover an underground drug trade, or like, a sex trafficking ring. Just saying.

By now most of you may know about my healthy obsession with this movie. The costumes are almost directly inspired by the Rankin-Bass take on The North Pole. The attitudes are also reminiscent of those films, as well, though: they spend of a lot of time shit-talking in their squeaky little voices. Buddy, however, best exemplifies their ceaselessly cheerful values, despite being the only technical human among their ranks.

Full disclosure: I do not care for The Polar Express. It's not a terrible movie, but it just never makes my must-see list, an opinion I made clear over and over last time my parents put it on. The elves here are slim but truncated, void of any true facial distinction. They wear little knock-offs of Santa's costumes, but really could use some of that Santa Clause-brand individuality.