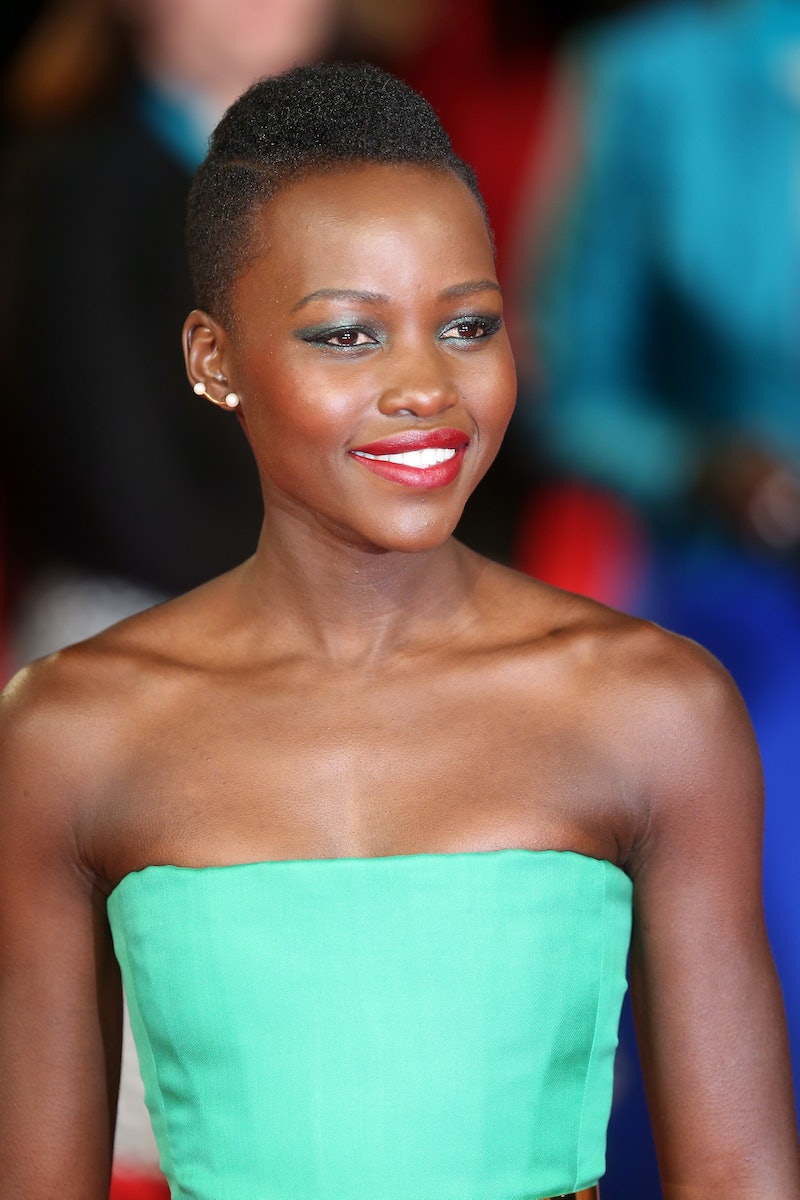 2014 has without a doubt been an incredible year for break-out star, Lupita Nyong'o. Following her Oscar win for Best Supporting Actress in 12 Years A Slave earlier this year, she has won the hearts of many fellow actors, people in the media and incredibly supportive fans, and it is very easy to understand why. She has proudly taken on the role of being a positive role model for not only women of color, but anyone who is struggling to follow their dreams in the face of adversity. On Monday, Lupita Nyong'o took to her Instagram to share a poem she wrote thanking her many loyal fans for their unwavering support. This absolutely proves what most people have been thinking the past year: Lupita Nyong'o is just an angel here on Earth sent to grace us with her inner and outer beauty. And OMG at that last line, "just go right along, you'll start happening too..." just tore at my heart strings.

Since the holidays seem to make an emotional mess out of me, reading Nyong'o's adorable words really solidified the fact that she is a rare jewel in the film industry, who is not only passionate about her art, but passionate in always uplifting those around her. In just this past year, the actress has had the wonderful opportunity to share her wonderful wisdom, and I gathered some of her best moments, because we can can always do with some beautiful words every now and then to assure us that we're all in this together.

She shared in front of the supportive Oscars crowd, "When I look down at this golden statue, may it remind me and every little child that no matter where you're from, your dreams are valid."

"To the beholders that I thought mattered, I was still unbeautiful. And my mother again would say to me, 'You can’t eat beauty. It doesn’t feed you.' And these words plagued and bothered me; I didn’t really understand them until finally I realized that beauty was not a thing that I could acquire or consume, it was something that I just had to be... I hope that my presence on your screens and in the magazines may lead you, young girl, on a similar journey. That you will feel the validation of your external beauty but also get to the deeper business of being beautiful inside. There is no shade in that beauty."

After sharing in her Essence speech how important model Alek Wek's image was to her accepting her dark complexion, she met Wek in an inspiring exchange. She told Wek in her most humble words, "I know you never knew I existed until I came on the scene with this thing, but I think that's the wonderful thing about being in some sort of public eye... that you can effect and inspire other people without knowing it. Your work is done and you have no idea about it... and that's very powerful so thank you for being that for me." Ugh, she's so darling.

Cover Girl for Glamour's 2014 Woman of the Year Issue

She told Glamour Magazine, "Every time I overcome an obstacle, it feels like success. Sometimes the biggest ones are in our head — the saboteurs that tell us we can't. I've always had that going on: 'I can't,' and then I do, so the voice says, 'Well, that was an exception!' It's a tug-of-war between two voices: the one who knows she can and the one who's scared she can't."

“Our dreams belong to us,” Nyong'o said in her recent speech at the Massachusetts Conference for Women. “We owe it to ourselves to try and realize them... we cannot let them defeat us." This speech is just teeming with beautiful words so I suggest you watch it in its entirety.