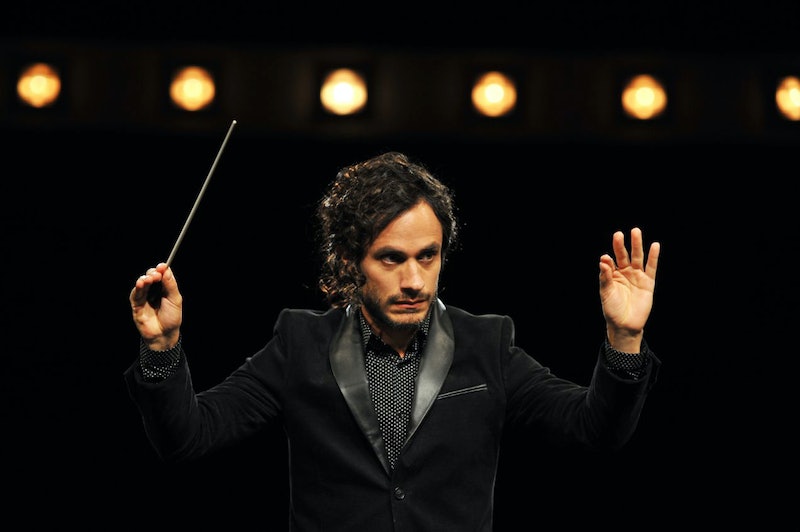 Gael Garcia Bernal makes his way back to our screens and into our hearts with the new Amazon series, Mozart in the Jungle, alongside other series stars Bernadette Peters and Malcolm McDowell. Gael Garcia Bernal stars as Rodrigo, the new maestro for New York City Orchestra who brings an eccentric style and madness to his new position. Mozart in the Jungle is loosely based on the memoir of the same name that mixes sex, drugs, classical music, and a hell of a lot of drama. It really seems like my kind of show, but before investing in an Amazon Prime subscription to catch the Roman Coppola & Jason Schwartzman series, I have to know: Is Mozart in The Jungle any good?

While the best way to figure out if the show is any good is to watch the series' pilot episode, which is streaming for free on Amazon, however, a show isn't always as good (or as bad) as its pilot. I scoured the internet for word from those who've screened the whole thing and all in all, I'd say it's time to get that Prime subscription.

Don't Judge it By the Pilot

The Los Angeles Times critic says that you should stick around beyond the somewhat offkey first episode of Mozart in the Jungle because the series improves from there:

The pushy tone of the pilot gives way to a kind of detailed yet dreamy naturalism, and the action moves out into the city and beyond.

The critic at Yahoo TV echoes that sentiment:

It takes a little while to find its rhythm, but Mozart in the Jungle turns out to be one of the better shows Amazon Studios has placed in its stream.

It's Good, But It Could Go Further

According to the The A.V. Club, Mozart in the Jungle needs to expect more from itself:

Mozart In The Jungle is one part performing-arts drama, another part workplace comedy, and the simplest of its charms are wrapped up in the day-to-day details of the musicians’ live[...] Mozart In The Jungle does a commendable job of pulling back curtains without losing sight of its characters’ humanity.If it could take notes from within, the series would do well to follow Rodrigo’s example and demand more blood, guts, and emotion from itself.

The New York Times pointed out Bernal, along with actress Debra Monk, as the main draw for viewers:

What Will It Remind You Of?

Mozart in the Jungle joins a long line of TV shows and movies interested in the behind the scenes antics of artists, in this case classical musicians. The 10 episode series has been receiving pretty good reviews but if you want more behind-the-scenes artistic drama, these shows and movies make great companion pieces:

Nearly every review I read about Mozart in the Jungle draws a comparison to the darkly comedic Canadian TV series Slings and Arrows. In his Yahoo TV review of Amazon's new series Ken Tucker writes:

If you ever saw the fine Canadian TV series Slings and Arrows about the backstage shenanigans of a Shakespeare company, you'll have some idea what Mozart in the Jungle seems to be aiming for: A lot of broad comedy tempered by moments of drama, all of it swaddled in a romantic view of high culture.

The 1984 period drama Amadeus is a classic that focuses on the lives of Mozart and a jealous, less artistically successful composer named Antonio Salieri in 18th Century Vienna. The film has been nominated for over 50 awards which is marker of its high pedigree and beloved nature.

The 1950 film All About Eve is my personal favorite from this list. All About Eve mixes the behind the scenes lives of theater folk with personal fiascos, a sincere interest in the changing romantic and professional landscape of women, and the most quotable screenplay ever written.

You know the line, "Fasten your seatbelts, it's going to be bumpy night." That's from this film, kids. All About Eve gives us one of the best characters to every hit celluloid in the form of Margo Channing played by my cinematic spirit sister, Bette Davis.

Mozart in the Jungle mixes the high stakes, emotional resonance, and vibrancy of the behind the scenes dramas on this list. The good reviews, great cast, and subject matter make me excited to check out the show which is now streaming on Amazon.