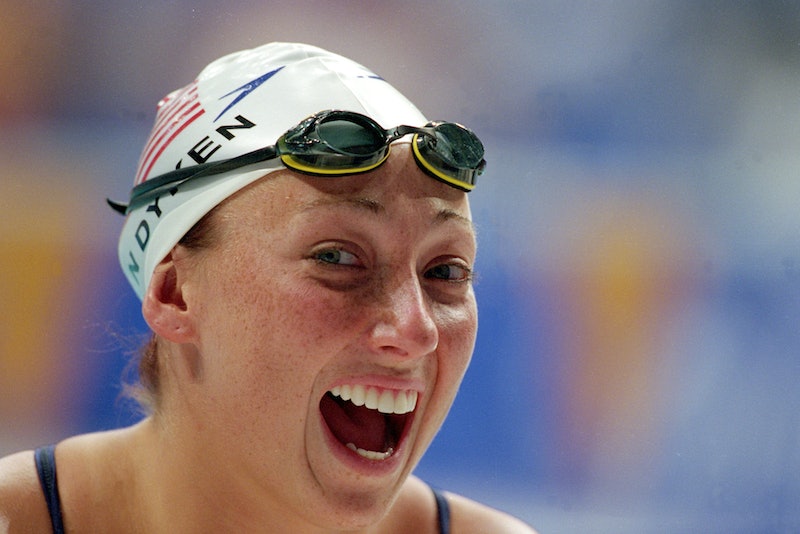 Here is one very important fact I have learned from ABC's annual special, The Year: 2014, Amy Van Dyken is probably the most inspirational person I've ever seen. For those who may not be familiar with the story, Amy Van Dyken is the Olympic swimmer who became paralyzed after an ATV accident earlier this year was interviewed as part of ABC's year-end review of the pop-culture, social, and political news of 2014. Despite her tragedy, Van Dyken was not only optimistic about her future, she was also confident in her future goals. During an interview with an equally inspirational woman Robin Roberts, Van Dyken was extremely frank about her situation and yet did not shy away from the fact that there was nothing she would tell herself or anyone else they could not do in life, despite any condition they might be enduring.

Van Dyken began her interview with an appropriately honest statement about her accident. "It sucks, let’s be honest." But rather than wallow in misery or the loss she feels, Van Dyken refused to be anything less than optimistic about what she could do to move beyond her tragedy. She made her determination clear by saying that no matter what someone wants to do in life, they can do it. It's just going to take a longer time, but it's still possible.

Van Dyken was just one of the many amazing people (and thankfully mostly women) that Robin Roberts and The Year: 2014 highlighted for their inspiration and their determination like the amazing young female athlete Mo'ne Davis. But Van Dyken is the person that really inspired me the most. Van Dyken's optimism should not be misconstrued, she clearly understands that this accident has changed her forever and she doesn't deny the pain she feels because of it. She just has the drive and need to be better, to do more and to not let the accident stop her from any of her future goals.

She's determined to walk, and she's already done so with an exoskeleton, but now she wants more. "The milestone of me walking is possible, but will I do it without braces? I don’t know, but just doing it will be a milestone no matter what." If that level of confidence and belief in oneself isn't truly inspirational, I don't know what is. Here's another thing I know for sure, there's no way we've heard the last of Amy Van Dyken. In fact, her new story is just beginning.

More like this
Kanye West Apologizes To Kim K "For Any Stress I Have Caused" In Rare Interview
By Jake Viswanath
A Deeply Scientific Investigation Into Alex Turner’s Many, Many Hairdos
By El Hunt
'School Of Rock' Changed Joe Keery's Life Forever
By Alyssa Lapid
18 Years After 'American' Idol, Jennifer Hudson & Simon Cowell Reunited On Her Talk Show
By Radhika Menon
Get Even More From Bustle — Sign Up For The Newsletter