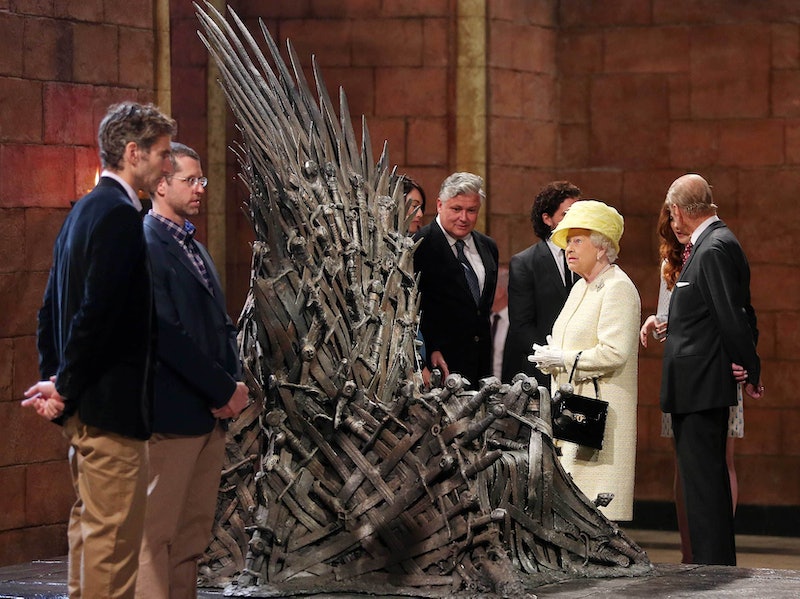 Just because she's an octogenarian doesn't mean that Queen Elizabeth II isn't cool, hip, with it. Or at least her publicity team is. On Christmas Day, the queen (or the palace? I don't really know how their press works) released her annual Christmas address. It was a particularly poignant one as today is the 100-year anniversary of the famed Christmas truce in 1914 in World War I, when French and German troops declared a ceasefire and met in no man's land on the battlefield to exchange gifts. A pretty inspiring and uplifting memory, but that's not what got people's ears perked in the Queen's speech—it was that she, for but a moment, mentioned her trip to the set of Game of Thrones in Belfast earlier that year.

Was it a relevant mention? Sort of, but not really. She went on to discuss her tour in Belfast, talking about reconciliation and truces in wartime, etc., etc. Which is all very noble, but let us not forgot that Queen Elizabeth II at 88 years old once stood before the Iron Throne. She politely decided not to sit in the terrifying seat, though; either she was scared of its stature or didn't want to sit where Joffrey Lannister once sat so smugly.

My real question is: does the Queen watch Game of Thrones? Who does she want to win, and die? Is she scandalized by all the nudity? What other shows does she watch? Surely, she loves Sherlock and Benedict. In all seriousness, though, it was a nice speech about reconciliation and coming together for peace, albeit brief; but by far, the Game of Thrones ref is what got it trending on Twitter. Merry Christmas from your Queen with an HBO subscription (unless she's using someone else's login).