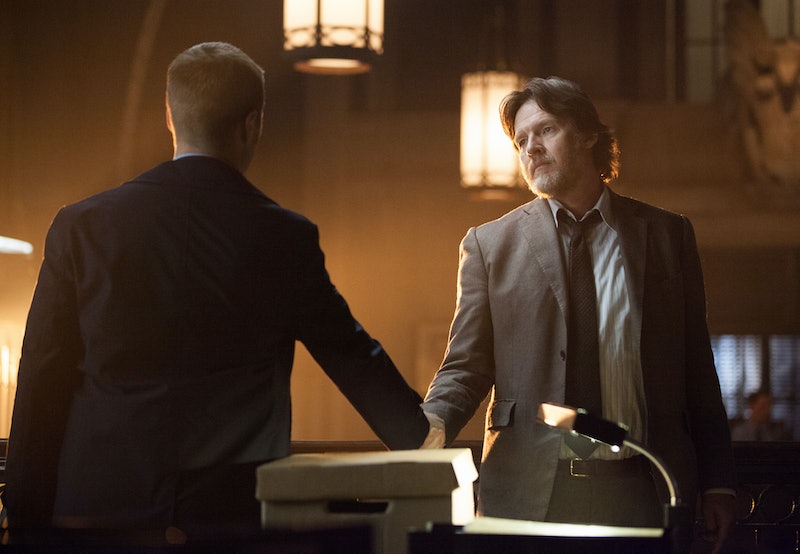 With the next new episode of Gotham airing on Jan. 5, the rest of the season will take place in the new year. And for 2015, Gotham characters have a lot of self-improvements to make. While the show is very enjoyable as is, I'd be hard pressed to say that it's an amazing drama, or even an amazing network drama. The show has tons of potential, but it hasn't quite nailed the right balance between comic book cartooniness and the gritty cops n' mobsters side of the story. So maybe it's time for some New Year's Resolutions among the GCPD. Like no more running out of work when a dangerous psychopath sent by a mobster shows up with a gun. And no more making fun of your coworkers for taking their job — of, you know, keeping citizens safe from aforementioned dangerous psychopaths — seriously.

And the whole city could use a few New Agey positive affirmations. I know that a grim reputation is what makes Gotham Gotham, but maybe a positive attitude would go a long way to stopping all of these citizens from taking the law into their own hands.

Get a personality — don't be such a boring stick in the mud, because in the comics Jim Gordon is a complicated, funny, interesting guy. And work on growing a mustache.

Harvey needs to pledge to take his job a little more seriously. (And it seems like in the next episode, he will.)

Get a library card, in order to beat his prejudice against reading books. And no more setting things on fire!

Work on that haircut. Or at least cover it with a hood more often.

Go outside once or twice! If you're going to be Batman, you need to get some real-world experience.

Take health seriously. Everyone seems to think Falcone's going to die at any moment, maybe taking some time out from planning elaborate schemes to work on his fitness would help him prove them all wrong.

Get a spray tan.

I can't think of anything. She has a plan for next year, and knowing Fish, she's already well into it.

For the Gotham writers, there are a bunch of options. I figure a network drama has a room of at least 10 people, so there's enough to go around.

If everyone sticks to these resolutions, 2015 will be a great year for Gotham characters and fans alike.