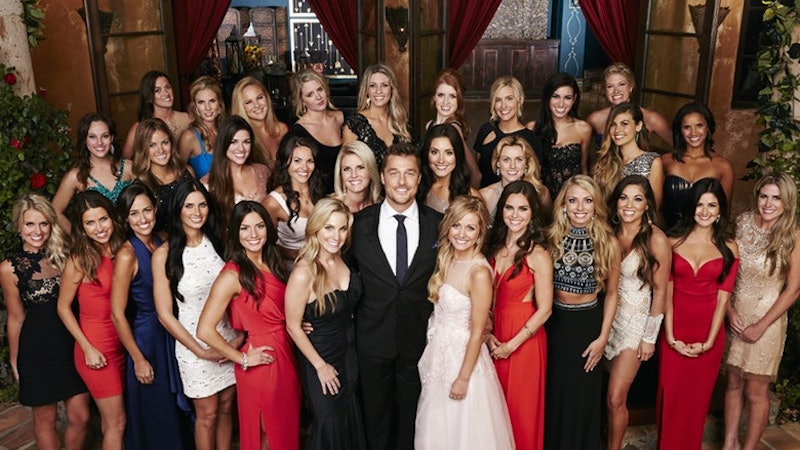 This season of The Bachelor is shaping up to be an interesting one (to say the least), what with Chris Soules being a farmer and his bachelorettes appearing to be sorta feminist. The dynamics will be interesting; but to be honest, I'm just ready to see the cocktail party/rose ceremony dresses already. Yes, I'm excited for those tacky, cheesy, embellished little numbers that the ladies wear each week whilst awaiting their fate. And I am not ashamed! One look at the released promo shot, and I already see a bedazzled two-piece, a lacy dress with matching wrist cuffs, and more shimmer and glitter than one person can handle. January 5th (and its inevitable over the top gowns) basically can't come soon enough.

Considering it's only a mere seven days until the next season launches, I've already started the countdown with more anticipation than I possessed the week before Christmas. Cheesy reality TV is my religion, and the season premieres of The Bachelor franchises are my ultimate holidays, OK? There's no doubt there's a sliver of me — whose rom com indoctrination started young and got me hooked on love — that is earnestly into watching the show and hoping for someone's idea of a fairy tale ending to come true. However, the majority of my fascination with the show comes from its train wreck aspects: especially the dresses. Luckily I've gotten to choose my own dress (not always the case for the bachelorettes) for the wedding parties I've been in. But most of these gowns truly look like a rejected bridesmaid's nightmare. Maybe my bizarre pleasure is a bit of a schadenfreude — because there's no doubt that I'd love to be flying in helicopters and drinking champagne on beaches, so I guess that causes some weird sort of jealousy. But I think not. Some of the dresses we've seen over the past seasons truly go over the top. So after 29 American seasons (and more to come), here are some of the most obnoxious (albeit sometimes fantastically so) dress moments — for better or worse — on The Bachelor:

1. THAT TIME A CONTESTANT MET THE BACHELOR FOR THE FIRST TIME... IN A WEDDING DRESS

I get that getting married is kind of the whole point of the show, but talk about coming on a little strong!

2. THAT TIME WE REALIZED ANDI MUST BE JACKED FROM WEARING 100 POUNDS OF BEADING

Seriously, so much beading. I'm going to just walk around in a ball gown and call it a workout from now on.

Sparkles are a chronic Bachelor favorite and this Australian bachelorette is really going for it.

4. WHEN KYLIE WORE A PINK PROM DRESS TO THE COCKTAIL PARTY

Seriously, there was a girl on Twitter who posted side-by-sides with her prom dress from the previous year. Let's dress like adults, now.

5. WHEN COURTNEY ACCESSORIZED WITH BLACK GLOVES BECAUSE THE OTHER GIRLS CALLED HER A "BLACK WIDOW"

I gotta admit, this look isn't necessarily for me but it is fierce. Plus, she won — take that mean girls.

Trisha, you were my favorite Canadian bachelorette. But this ensemble makes you look more like a grandma's couch than the super sweet beauty queen you are.

7. WHEN IT WASN'T SO MUCH ABOUT THE DRESS, BUT WHAT WAS UNDER IT

I do not have a problem with a pregnant bachelorette. But "playing pregnant" to stand out is just weird.

Why yes, that is snakeskin print and a gemstone sweetheart neckline.

Pink? Cute! A little sparkle? Cute! The two of them together? Much too much.