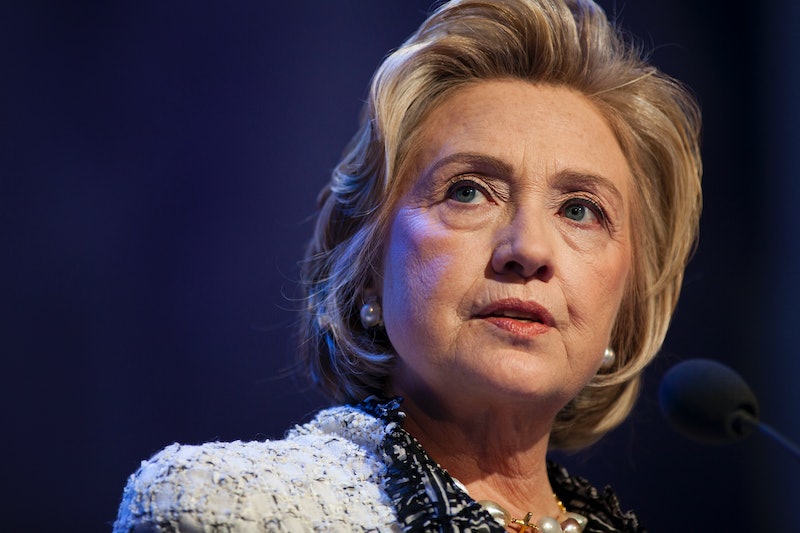 On Monday, both CNN and NBC canceled highly-anticipated but hugely controversial planned projects about Hillary Clinton. CNN's proposed documentary fell through when the director, Charles Ferguson, dropped out, citing a lack of support from both political parties. Only a few hours after CNN's announcement, NBC revealed that it was pulling the plug on a Clinton-centered miniseries, likely in response to the Republic National Committee's threat of an NBC boycott if the network went through with the series. The only remaining project about the possible presidential nominee in the works? James Ponsoldt's Rodham , a feature film about Clinton — then Rodham — as a young lawyer in the '70s, set to be released in 2014.

With the miniseries and documentary now not happening, Rodham faces immense pressure, especially if Clinton ends up running for president. It has the unenviable job of being the public's only major media-created interpretation of Clinton, and depending on how the film depicts her, it can have a huge impact on how her character — and her political chances — are regarded by audiences. Obviously, more factors than just Rodham will impact voters' opinions of Clinton, but movies have a larger influence than people think. Just think of how we all view Mark Zuckerberg after The Social Network, despite the fact that the Facebook founder's personality was exaggerated for the sake of drama. Or Game Change, which managed to humanize Sarah Palin, a political figure who almost seemed inhuman thanks to some of her more publicized gaffes and controversial statements. Rodham's portrayal of Clinton will matter on a large scale, and that's why I'm not so sure whether it's a good idea.

I'm a huge fan of James Ponsoldt, having loved both his previous movies, Smashed and The Spectacular Now. He's a fantastic director, and armed with a script off The Black List, I have no doubt that Rodham will be a great film. Yet I'm worried that it'll have a negative effect on Clinton's campaign, assuming she runs. If the movie is a brutal, unforgiving look at Clinton, it'll reinforce viewers' beliefs that she is unlikeable and unappealing, and it'll most definitely damage her election chances. Even if Rodham shows Clinton in a positive light, it might alienate on-the-fence voters who don't want to see a candidate get special treatment from the media. The movie could attempt to be unbiased, of course, but even that won't go over well with critics and viewers; despite Clinton's lack of involvement in the production, it'll look manipulated and contrived, like the filmmakers were forced by members of her staff to stay in neutral. No matter how Rodham portrays Clinton, it's bound to to be misinterpreted by at least one political party.

This is unfortunate, because Rodham will likely be great. Ponsoldt is a master at making his movies feel honest and lived-in, and while no casting has been announced, possible Clinton-portrayers Amanda Seyfried, Scarlett Johansson, and others would undoubtedly be fantastic as the former Secretary of State. I want this movie to be made, for the sake of filmmaking, but I don't want it to hurt Clinton's campaign. Unfortunately, it doesn't look like I can have both.