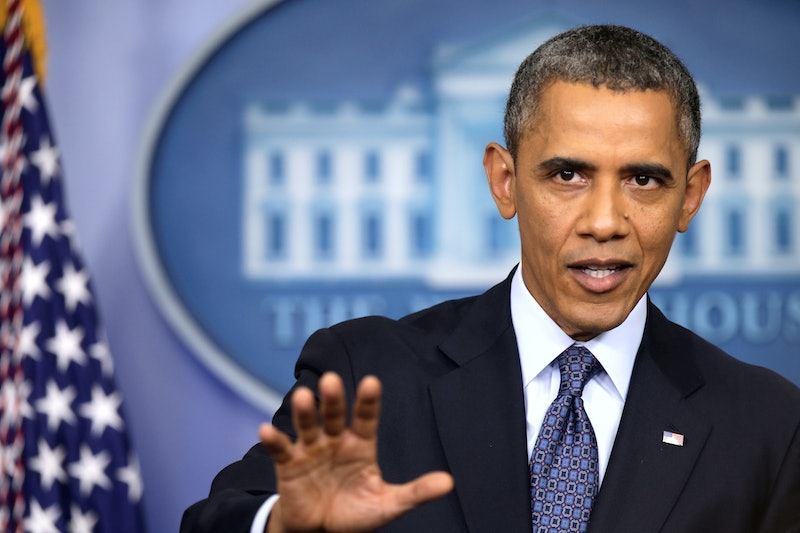 President Obama and Speaker of the House John Boehner spoke on the phone this morning about the impending debt ceiling crisis but emerged no closer to an agreement than when they started, the president said in a press conference Tuesday afternoon. Obama and Democrats still refuse to negotiate with Republicans until they raise the debt ceiling, and Boehner still refuses to raise it before negotiating with Democrats.

However, Obama did signal that he'd be willing to to tie the debt ceiling increase to a promise for future negotiations.

“This morning, I had the chance to speak with Speaker Boehner and I told him what I’ve been saying publicly: That I would be happy to talk with him and Republicans about anything,” Obama said. “But I also told him that having such a conversation, talks, negotiations shouldn’t require hanging the threats of a government shutdown or economic chaos over the heads of the American people.”

Obama dismissed Republican accusations that he’s not willing to compromise, saying he’s been open to compromise for his “entire political career.” He insisted, though, that doing so prior to the raising of the debt ceiling would set a dangerous precedent for future congresses and presidents.

“I have flaws. Michelle will tell you. One of them is not that I’m unwilling to compromise,” Obama said. “I don’t believe that I have the answers to everything and that it’s my way or the highway. But I’m not going to breach a basic principle that would weaken the presidency, change our democracy and do great damage to ordinary people just to go along with what the House Republicans are talking about.”

In addition to refusing to negotiate on principle, Obama also rejected the idea that Republicans actually want to negotiate to begin with, portraying the Republican proposal as “a negotiation in theory, but in fact, basically, Democrats give a lot of concessions to Republicans, Republicans don’t give anything, and that’s dubbed as compromise.”

“You can dress it up any way you want, but if that’s the theory that Republicans are going forward with, it’s not going to work,” Obama said.

Boehner himself gave a press conference hours after Obama spoke, and reiterated the need to negotiate on spending before the debt ceiling is raised.

"This isn’t about me and frankly, it isn’t about Republicans," Boehner said. "It's about saving the future for our kids and grandkids, and the only way that’s gonna happen is if we have this conversation. Not next week, not next month. The conversation ought to start today."

Boehner also accused the president of demanding "unconditional surrender" by Republicans. Of course, if agreeing to pass a clean debt ceiling raise constitutes "surrender" on the part of Republicans, that would imply that Boehner and Republicans want the nation to default; Boehner didn't, however, address that line of logic.

Ever since last week, the House GOP has been attempting to dig themselves out of the hole they’ve dug without actually conceding anything to Democrats, which is tricky — since the GOP considers it a concession to keep an already-passed law that’s been upheld by the Supreme Court on the books.

Boehner’s latest gimmick, announced this morning, would involve the creation of a non-binding, bipartisan, bicameral supercommittee tasked with crafting a deficit-reduction policy. While Obama voiced some skepticism over that idea (“I don’t know that we need to set up a new committee for a process like that to move forward”), he did signal that he’d be open to a debt ceiling increase that mandated future negotiations.

Still, Obama generally sounded a defiant tone, and even in his willingness to enter future negotiations, he ruled out any gutting of the Affordable Care Act.

“[Republicans] don’t also get to say, ‘Unless you give me what the voters rejected in the last election, I’m going to cause a recession,’” Obama said. “That’s not how it works. No American president would deal with a foreign leader like this, most of you would not deal with coworkers and business associates in this fashion, and we shouldn’t be dealing this way in Washington.”