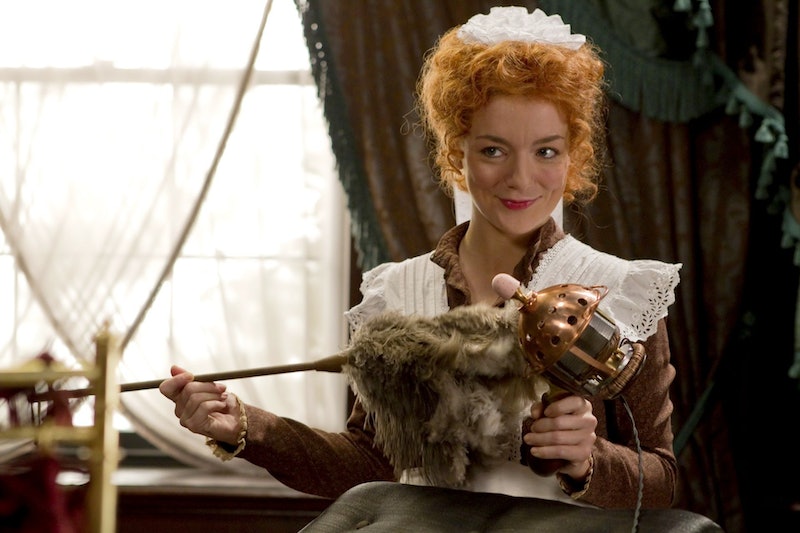 The female orgasm has had a rough time of it — but its history has been more varied than you might think. The big O, for women, hasn't actually been shoved under the bed and ignored for all of human history. While it's certainly been sidelined, misunderstood, misdiagnosed, under-prioritized and argued over, the history of the female orgasm is more "repression broken by brief bouts of fervent interest and development" than "universally ignored until the 1960s and Sex & The City made us all buy vibrators." And knowing this is important: it gives us a good understanding of how far we've come, and (hopefully) where we're going next. The female orgasm isn't a unicorn, it's a misunderstood breed of purebred dog: common, frequently feared, occasionally in fashion throughout history, and giving great happiness if well-trained.

What's also interesting is how often the history of the female orgasm keeps rearing its head. Some medieval theories, as we'll see, are actually still talked about by politicians (even though they're complete nonsense), and ideas about its role in the mating game are bandied around decades after they first surfaced.

So here's a list of the five top moments in the history of the female orgasm. We haven't included the first one, because it's lost back in the mists of time — but after that seminal moment, the big female "O" has had some pretty interesting times.

Contrary to what you may be getting from medieval romance novels, the medieval scientific theory of sexual reproduction had a pretty strong role for the lady's orgasm. Namely, they thought it was absolutely required if a sex act was going to produce a baby. As an idea, this turns up in a host of medieval texts, from the 13th century onwards.

This seems like good news for women from the 13th century, but it isn't, really. It was based on the idea that women's sexual organs are exactly like men's, except "inverted," which obviously meant that women ejaculated in some form as well — hence the requirement for a female as well as a male orgasm.

The problem with this, as you may have already guessed, is that it's still being used by "legitimate rape" apologists like Todd Akin, who think that female pleasure is necessary to conceive a baby, which means that if you're raped and get pregnant, you must have orgasmed, and so it can't actually have been rape. Spectacular, huh.

This is the one part of female orgasm's history that we tend to all be familiar with: the fact that female sexual tension was diagnosed as "hysteria," or "wandering womb," a kind of female-specific nervous condition that drove a woman completely insane and required pelvic massage and douching to relieve it.

Having an orgasm be seen as a medical necessity to prevent your womb driving you up the wall — orgasm as pathology, in other words — is neither fun nor particularly helpful to the idea that husbands and partners might want to provide the pleasure themselves.

Scientist Alfred Kinsey's huge sexual survey in the 1940s did much to demystify the orgasm (and a lot of other sexual behavior). It was pretty thorough, and he uncovered some interesting factors that still influence how we think about female orgasms and how they're achieved today.

This frankness about sexual experience, personal differences in sexual habits, and the wide range of possibilities for pleasure, made the female orgasm less of an elusive beast and more of a concrete fact. You can't argue with statistics: it was here to stay.

Now that the female orgasm was thoroughly believed and acknowledged to exist (at least in scientific circles), argument began to rage about what it was for.

In the 1967 book The Naked Ape , Desmond Morris argued that the female orgasm might have developed to make males prove that they had determination, gentleness, tenderness and all the other qualities required to bring one about: all good factors in a good father for one's children. (He also suggested it might increase the possibility for conception by "knocking the woman out" and keeping her horizontal so that the sperm could reach the egg easier, which is complete nonsense.)

However, other scientists have suggested a variety of other hypotheses: that the female orgasm isn't to do with monogamy at all, but a way of bonding with multiple sexual partners; that it's a way of helping fertility by "sucking" the sperm through vaginal spasms; and that having an orgasm raises a female's likelihood of having lots of sex, thus improving the probability that the species will survive. (Which is fair enough.) Nobody's quite hit on a definitive explanation yet.

Scientific team Masters and Johnson, meanwhile, the stars of the TV show Masters Of Sex , were quietly producing in-depth studies throughout the '60s that proved, amongst other things, that multiple orgasms were definitely a thing and that orgasms could come from vaginal or clitoral stimulation. Knowledge was definitely empowering us.

The 2000s: All About The Health Benefits

The orgasm, having firmly established itself as a part of the sexual world, was gaining traction. Scientists lined up to prove what it was good for: if it didn't have a specific sexual or reproductive function, surely it did some fun stuff, right?

That, to us, seems like a good enough reason to have one a day, like your vitamins. Up to you though.