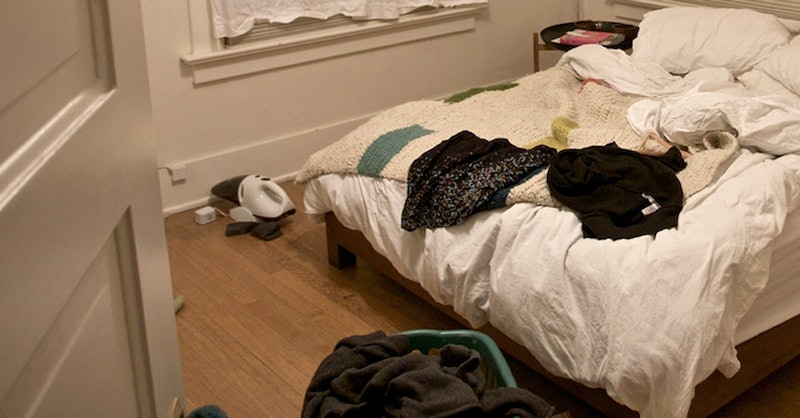 So you’ve nailed the first date, the second date, or whatever your standard pre-sex number is, and things are looking good. Congratulations! But when the person you’ve been dating asks you to come over because they're cooking dinner for you and/or you’re going to have sex (finally!), you'd best believe you need to pay attention to what their apartment feels and looks like. After all, their place is going to give you a pretty decent insight into the person they are, and where they're at in their life (how can we forget the Friends episode where Ross goes home with a woman whose apartment is a total disaster)? While we all have different standards of cleanliness and ideas of organization, there are definitely certain things that should be immediate red flags in someone’s apartment.

So the next time you’re invited to someone's place for the first time, be really honest with yourself about what’s acceptable and what isn’t. I’m not suggesting you should run like hell if there are chip crumbs on the coffee table, but you should definitely give credence to your instincts about their surroundings.

Here are 20 foolproof apartment red flags to watch out for next time you go over to someone's place for the first time.

Why it's a red flag: Shows a lack of attention to detail, comfort, and privacy.

Why it's a red flag: Unless they've just moved in, bare walls are a sign of laziness and lack of attention to detail and beauty.

4. Sexist Posters (Even If They're "Ironic")

Why it's a red flag: Self-explanatory.

In this case, you want to run. You don't want to date someone who sees women as objects.

5. They’re Using Their Bed As A Hamper

Why it's a red flag: Shows lack of interest in properly seducing you.

We're all guilty of tossing our clothes onto the bed in a rush to find something to wear, but if it's clear that that's just where they keep their dirty laundry, then we have a problem.

Why it's a red flag: Shows a lack of consideration for others.

Dirty dishes don't just smell — they're traps for rodents and cockroaches. Even if they say it's their roommate's fault, a major pileup shows an inability to find a system that works for them.

7. Trash That Clearly Hasn’t Been Taken Out In Days

Why it's a red flag: It's sign of immaturity.

Yes, taking out the trash is annoying, but if this person knew there was a chance you'd be coming over, they should have taken care of it. No one wants to smell someone else's rotting leftovers.

8. A Funky Smell That You Can’t Really Identify

Why it's a red flag: They nasty.

It's like maybe garbage, maybe sweaty clothes, or maybe there's an animal dead under all this? That is not the sort of guessing game you want to have to play every time you're there.

9. No Fitted Sheets On The Mattress

Why it's a red flag: Shows immaturity.

It's one thing if they sent their laundry out and clean sheets are on the way, but it's another thing if this is just how they live. Adults should know that sheets are an important part of a bed.

From the walls to the floor to the counters to the damn bed? No. Don't stand for it.

Why it's a red flag: Lighting is everything when it comes to romance, so this shows a lack of interest in it.

12. The Couch Is Their Coat Rack

Why it's a red flag: Shows lack of follow-through.

Sure, not everyone has a coat rack, but most of us have a closet. Closest are for all clothes, including coats.

Why it's a red flag: Shows a lack of attention to their own health.

Not only is mold gross, but it's also bad for you because certain strains of mold are toxic.

14. A Toilet Seat That Is One-Part Porcelain and Nine-Parts Splatter

Why it's a red flag: Shows an inability to take care of themselves and consider others.

I've always believed that if you make a mess of the toilet, sprinkling pee on the seat or otherwise, you should clean it immediately. Letting it sit there and just become one with the toilet is indicative of a huge problem, and that problem is that the person is disgusting.

Why it's a red flag: Do we really need to explain this?

Why it's a red flag: They don't do laundry often enough.

17. Their Roommate Doesn’t Even Acknowledge You

Why it's a red flag: They probably sleep around a lot.

It would be nice to at least ask you your name. If their roommate's treating you like you're just the third person this week, beware.

Why it's a red flag: They aren't a good caregiver.

Similar to mold, cat piss, which contains ammonia, can become toxic in high levels, too. And it certainly isn't nice to their kitty.

Why it's a red flag: They take on more than they can handle.

Yes, animals shed, but that's why we have vacuums.

Why it's a red flag: Imagine how you'll feel after you sleep with them.

If you're kinda scared of touching or sitting on anything in that apartment, that should be such a red flag then you should make a run for it. It's not being mean — it's admitting to yourself that you don't like this person's living environment. Trust your instincts.

More like this
15 Easy Pranks To Play This Halloween
By Emily Kelley and Lauren Grant
26 Ghost Story Podcasts To Get You Ready For Halloween
By Jessica Booth, Mia Mercado, JR Thorpe and Emma Carey
The 19 Best Tweets & Memes About Bisexual Awareness Week
By Lexi Inks
Why A Libra & Libra Couple Might Become Codependent
By Kristine Fellizar
Get Even More From Bustle — Sign Up For The Newsletter