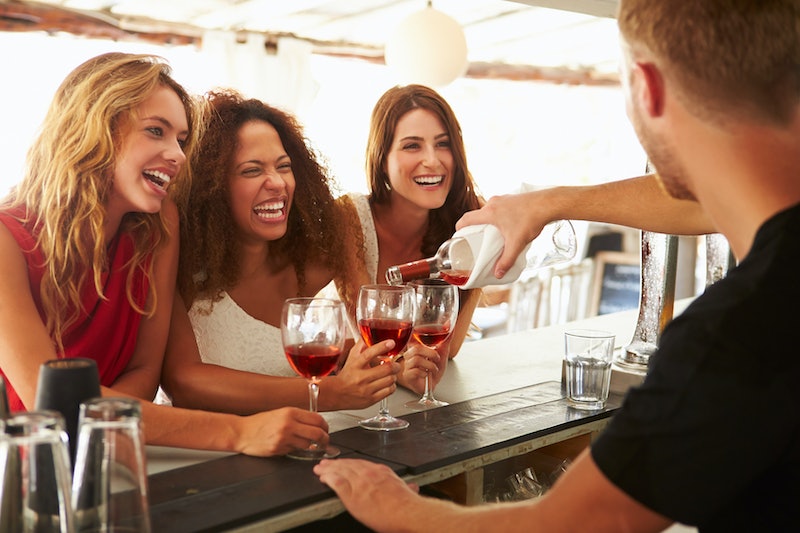 You're probably familiar with that feeling you get when you go out with someone who was Ryan Gosling-levels of attractive when you met, somewhere between your third and fourth drinks last night, but is more of a Steve Buscemi in the cold, sober light of day. A recent study, however, found that this works both ways, i.e. drinking can make you appear more attractive to other people. I mean, you already knew that, judging from the amount of bathroom selfies you took last Saturday night because you were feeling especially fine, but it always helps to have science confirm these things.The study, published in Alcohol and Alcoholism, sounds like the kind of study most of us would happily volunteer for. Participants were photographed in three separate states: sober, tipsy, and drunk. The tipsy state was reached by drinking 250 milliliters (mL) of 14 percent-alcohol wine, or about a third of a bottle, and the drunken photograph was taken after 500 mL, which is around two thirds of a bottle. The sober, tipsy, or drunk photographs of 104 participants were then shown to heterosexual (sober) participants of the opposite sex, who rated the pictures by attractiveness. The results? Participants in the tipsy condition were consistently rated the most attractive, which is the best excuse for getting my drink on I've heard all week.

You've probably noticed yourself that a little alcohol makes it significantly easier to approach that guy at the bar you've been eyeing all night, and this lowering of inhibitions could go a long way in making you look more attractive to others. (In fact, a study way back in 2000 found that alcohol literally boosts your self-confidence temporarily.) However, as Refinery 29 points out, participants were rating still photos of neutral expressions, meaning that behavior couldn't factor into the equation in the study.As always, however, the researchers behind the study have a few ideas about what caused the results. First up is that embarrassing blush you get when you start drinking: instead of the shameful evidence you can't hold your alcohol that you know it to be, people apparently interpret it as a healthy glow. Secondly, alcohol's tendency to relax your muscles loosens up the tension in your face, making you seem easier to talk to. Crazily enough, people aren't super attracted to someone who's visibly wishing they were back home with Netflix and their cat, even though that's a perfectly valid reaction to ever leaving the house on a Saturday night.All this isn't to say you should get wasted every time you go out manhunting. Remember, the most attractive people were just tipsy, not drunk, so it's probably best not to get too carried away when you're on a date. (Plus, your liver will thank you for it later.) What you should take away from the study, though, is that you can totally have that second glass of wine next time you're out and feelin' frisky, because you're practically doing yourself a favor. Thanks, science!

More like this
10 Pumpkin Recipes That Are Way More Creative Than Pie & Lattes
By Rebecca Deczynski and Alexis Morillo
On TikTok, Tinned Fish Date Night Is The Latest Viral Food Obsession
By Emma Carey
3 Zodiac Signs Most Likely To Be The Center Of Attention
By Nina Kahn
Isa Guha Is Taking The Lead
By Charlie Mock
Get Even More From Bustle — Sign Up For The Newsletter