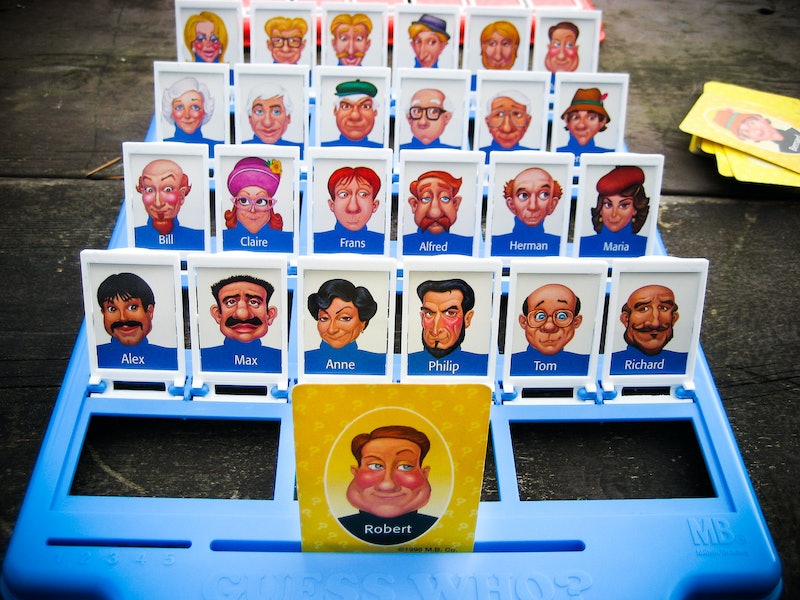 Playing board games with kids is super fun! Well, OK, sometimes it's a pain because you have to let them win, and they don't pay attention or follow the rules, and oh my god, when is your mother getting back?! But, I digress. A new video from Funny or Die turns the tables a little bit, with a very cute 4-year-old playing "Guess Who" with a woman whose mind seems to be elsewhere (perhaps on the weird rash she suddenly has). For those of you whose childhoods were joyless and spent on a desert island away from other humans, Guess Who? is a game where each player has a board displaying pictures of faces, each with a different name. You choose a card with a character's name, and your opponent has to guess who it is, based on clues you provide in response to their questions like, "Is it a woman?" or "Does she have blonde hair?" This goes on until one player figures out where their character is on the opponent's board. Whatever, you guys know this game.

But when comedian Kristen Studard finds out her young opponent has chosen a female character, she tells him no, he can't change his character and yes, he has to learn to deal with being a woman and hence being disadvantaged. Then the questions get a little weird (OK, a lot weird): "Does she sometimes wonder if she's capable of true, lasting happiness?" is not necessarily evident from the character's picture, for instance.

"Does she have an irrational fear that she may contracted herpes even when she's not sexually active?" Clearly, the questions have gone way beyond what her opponent (who, again, is 4) can reasonably answer.

Obviously, now you'll need a few suggestions for ways to take other innocent kids' board games and turn them into weird, twisted semi-adult versions that will be totally baffling for kids and make them leave you alone and never ask to come to your house again. Don't worry, I'm here for you, guys!

Candy Land, But With Alcohol

Wouldn't Gum Drop Mountain and the Candy Cane Forest be way better if they were the Margarita Mountain and the White Wine Woods? Yes, of course! Since this game doesn't have any rules, really—you don't have to be able to read, and it has a spinner instead of cards—it wouldn't matter all that much if you were imbibing while you tried to get to Candy Castle, which is where the vodka is. The queen likes martinis, OK? It's a win-win, really, as long as you're 21. Go to bed, kid, the babysitter just hit Peppermint Forest and needs to find the schnapps.

Come to think of it, there's nothing funny here, kid. Why the hell would this be a game for children? It's just wrong. They should get to be kids for a little while, you monsters. Here's a tip for playing the game of Life: Just stay in college as long as you can. Go to grad school, get a PhD. Better yet, don't play the game of Life, because—SPOILER ALERT—you will probably lose.

More like this
The Spiritual Meaning Of Angel Number 000, Explained
By Kristine Fellizar
Here’s Your Daily Horoscope For October 3, 2022
By Mecca Woods
How To Turn Your Small Living Room Into A Cozy Nook For The Holidays
By Jessica Goodman
9 Tips For Hosting A Holiday Party In A Small Apartment
By Anna Davies
Get Even More From Bustle — Sign Up For The Newsletter