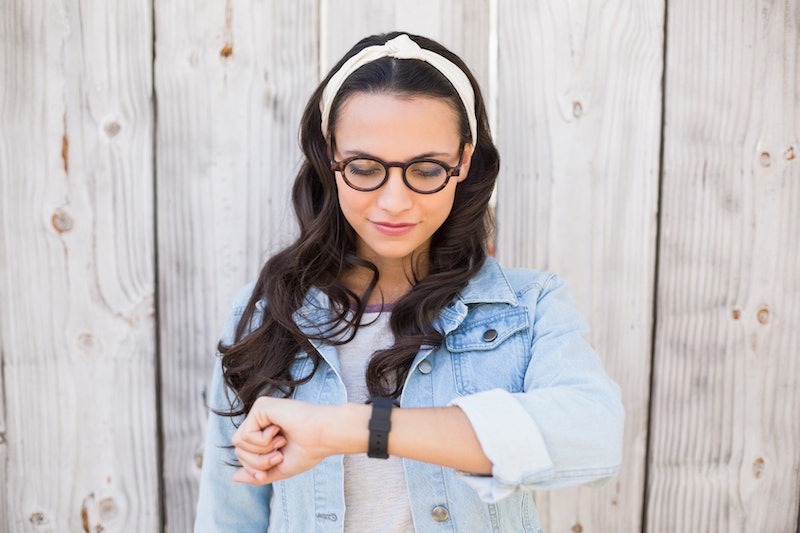 I'd like to clear something up before I begin: I am the most easily distractible human that I know. I am basically the dog from Up, except that I am a human girl, and instead of yelling "SQUIRREL!" I am usually yelling at things I've seen in bakery windows. That being said, despite my total lack of an attention span, I value being on time more than I value my own sanity. My high school choir teacher's words have been basically tattooed on the inside of my brain: "To be early is to be on time, to be on time is to be late, and to be late is to be rude."

Read that sentence again and wrap your head around it. That's right — there's no way to win this game. My friends often make fun of me for showing up to places fifteen minutes, thirty minutes, even a full hour early and planting myself outside until other people show up, but I just can't help myself. Being ridiculously early soothes my brain, and being late is unquestionably unacceptable.

That being said, I don't necessarily have a problem with "late" people — unless, of course, they are making me late. I love my mother to the moon and back, but I swear she derives actual pleasure from being late to places, and even once mentioned to me that it privately felt good to rebel a little bit by not showing up on time (I come from a long line of goody two-shoes, to explain). There is one family Christmas card where I am blatantly in tears, because I was late for my shift at the toy store and my parents just needed one more shot before they'd let me go. This fundamental misunderstanding has plagued me for decades.

Chronically late people, I love you. I am happy to wait for you when you are fifteen minutes late to our coffee date, and I respect that sometimes life gets in the way of best laid plans. But all the love and respect in the world isn't going to clear up my genuine confusion about why late people are the way that they are, misunderstandings that include and are not limited to:

If they know how a watch even works (Spoiler: It's not hard)

I don't mean this in like a sarcastic, judge-y way. I genuinely wonder how late people are not slaves to their watches (OK, phones) the way that I am. If you yanked my phone from me and gave me a pop quiz on what time it was, I could give you an accurate answer within five minutes of the actual time no matter what the circumstances were. Hell, the two times my alarm didn't go off, my body woke itself up a minute later. How have late people broken away from the mighty master that is the clock?!

If this is their first day out in the world

It always astounds me when late people are surprised that they're late. It's not like their commute to work magically changed overnight. I don't have much sympathy for people who are late because of traffic, either; I factor in extra time to account for traffic even when I don't think there will be any, or when I'm just casually riding over to the drugstore down the street.

How they are so laid-back about their lateness

Even thinking about being late stresses me out. I have successfully blocked out most memories of times I was late because I just refuse to let myself go there if I can help it. For me, being prompt and on time is one small, comforting shred of the universe that I feel like I have control over, and when I don't, I am disproportionately upset about it. One semester in college, I physically ran through the campus to get between classes not so that I could get there on time, but so I could get there five minutes early and get the best seat. I often wish I had the chillness of my perpetually late friends. I'm aware that I will probably dig myself an early grave when all the vessels in my brain pop from missing the first two minutes of a Hunger Games sequel in theaters, or being 90 seconds late to a coffee date.

Why they don't just LEAVE EARLIER

When I have to get somewhere, the more confusing the route there is to me, the bigger I will make the "buffer zone," aka the number of minutes I will intentionally give myself to account for hold-ups along the way, wrong turns, or if nothing goes wrong en route, to show up early to whatever engagement I'm headed to. I get to auditions two hours before the doors open, I get to work fifteen minutes before I'm supposed to, and if I told you how early I get to airports for flights, you'd probably cry for me.

Why they even make plans in the first place

Why not just say, "Hey, there's really no telling when I'm going to show up, sooooo, maybe just go and I'll probably appear at some point!"? Look, I am very forgiving of people who are late. If we have plans to have lunch and you show up 15 minutes late because of... whatever, honestly, I'll be super forgiving and not hold it against you as a person. But if you do that MANY times over the course of our friendship, then you officially become one of the Chronically Late Humans, which is a breed of person I find endlessly annoying. I am very flexible when it comes to making plan. I usually let my friends solidify the schedule of our appointed meet-ups, and will even go out of my way to accommodate their weird schedules, which is why I'm extra confused when they are LATE.

When I am late to something, I can feel the stress of it in literally every muscle fiber on my bones. My brain is screaming and my jaw is set and I will shriek things at other drivers that would make Chelsea Handler blush. I acknowledge that this is a mildly unhealthy way to live my life, and that the stress will do literally nothing to impact the degree of my lateness, but I cannot turn it off. Which is one of many reasons (other than basic decency and respect for the people I'm meeting) why I'm never late. How are you turning it off, late people? What is your outlet for your crazy? Can it be that you have a distinct lack of crazy that us on-time people have, or are you just secretly screaming in your sleep instead? TELL ME YOUR SECRETS. I NEED TO KNOW.

How they manage to get anything done

I never go anywhere without my laptop, an idea journal, and a book. Being ridiculously early for things is like the high I need for my brain to make ideas. I have made more money on freelance projects in the parking lots of rehearsal spaces than I probably have from my own living room couch. And even if I don't have wi-fi wherever it is Absurdly Early Me is hanging out, I spend the whole time letting my brain wander to all sorts of places I wouldn't let it go if I were worried about being late again. Which, incidentally, I never, ever am.

Don't you feel bad when you mess up other people's schedules?

I don't mean to get preachy here, but somebody had to say it. I once read a really good point about this in an article that explained it like this: Say you're ten minutes late for an important meeting with three people in it. You didn't just waste ten minutes of productivity — you wasted thirty minutes of it. And you basically stole all that time from not only them, but the company that they work for. It adds up pretty fast for people who prone to lateness.

But even just on a social basis — a few minutes late is whatever, but when you're more than fifteen minutes late on a regular basis, it just feels to us prompt people like you are letting us know that we are not a huge priority compared to whatever it was that made you late. In some cases this is fair, but in the case where people "lost track of time" on Netflix or something, it is rude and offensive and just not at all cool. THERE. I said it. It's rude. I still love you guys, but it's rude rude rude rude.

More like this
The 19 Best Tweets & Memes About Bisexual Awareness Week
By Lexi Inks
The Spiritual Meaning Of Angel Number 000, Explained
By Kristine Fellizar
This Psychological Effect Might Be Keeping You From Hitting Your Goals
By Lexi Inks
Bustle Daily Newsletter: October 4, 2022
By Hayley Schueneman
Get Even More From Bustle — Sign Up For The Newsletter