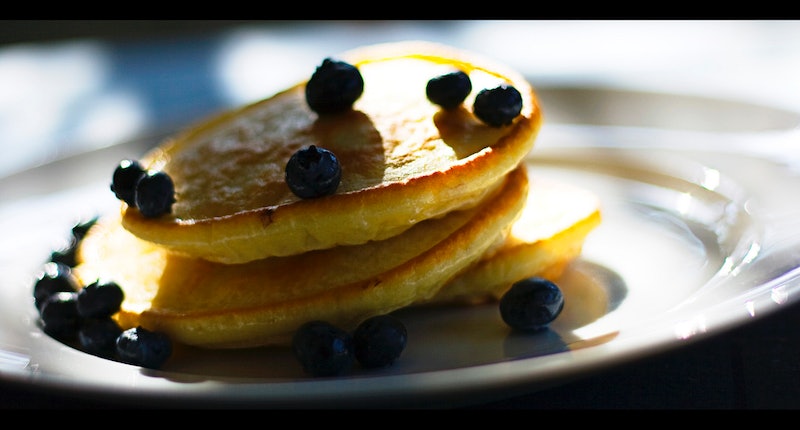 Very important news: A robot exists that will make you pancakes in whatever shape you want them to be. It's called PancakeBot, and it is absolutely magical. Not only that, but it's finally about to become attainable, too. You heard me: You can actually own a pancake printer. I think I speak for all of us when I say that breakfast will never be the same again.

I made a brief reference to PancakeBot a few months ago when I discovered that Hershey's had invented a 3D chocolate printer; now, however, it appears the breakfast machine has stepped up its game: Its creators have launched a Kickstarter campaign — which, with 23 days left to go, has already met and far surpassed its goal of $50,000. As of this writing, it's raised nearly $200,000. I've no doubt the number is going to continue to rise in the remaining weeks, too.

PancakeBot's very first iteration was actually built out of a somewhat surprising material: LEGO. Dad Miguel Valenzuela created it for his daughters, who were one and three years old at the time. After a six-month development period, the LEGO PancakeBot was up and running—and when it received an enormously positive response at the World Maker Faire in New York, Valenzuela decided to take it to the next level. An acrylic version of the machine debuted in 2014 at two more Maker Faires (San Mateo's and the White House's, for the curious), and now? Now it's hitting the big time, thanks to the wonders of crowdfunding.

Here's how PancakeBot works. It starts simple: First, draw yourself a picture. Next, import it into your computer using software that comes with the bot. Then, after going back over the outlines and filling in the bits you want to be solid pancake-y goodness, hit print, and voila! PancakeBot goes to work drawing your picture in pancake batter on the hot griddle. All you have to do is flip it once it's drawn to finish your delicious, personally designed pancake off. You can even save your designs on an SD card so you don't have to redraw your favorites every time you want to eat them. Here, take a peek at it in action:

Naturally the best Kickstarter incentives are for those who kick in hefty amounts; $149 gets you a PancakeBot of your own (which, by the way, is about half off what the retail price will be once it drops — PancakeBot will be going for $299 regularly), with the number of PancakeBots granted going up with each successive tier. Valenzuela is aiming to get the things shipped out by July, so the most exciting breakfast you'll ever have is only about four months away. How awesome is that?

Alas, I don't have the spare cash to kick in for a project this pricey. If I did, though, pancake shapes I create with it, then jam into my mouth, include the following:

I don't have a terribly steady hand, so I figure Kirby — who's basically a circle with eyes, a mouth, flippers, and feet — will be a good place to start.

Because who wouldn't want to eat Winterfell in pancake form?

This isn't her, but it looks an awful lot like her. I'll likely deem the pancake version too cute to eat, but oh well.

The literary breakfast of my dreams would consist of a Neil Gaiman starter, a Jane Austen main, and a Maurice Sendak dessert.

To boldly go where no breakfast has gone before!

6. Calvin and Hobbes on a Sled

Obviously I will create pancake hills for them to travel over while I'm at it.

Check out the PancakeBot Kickstarter here.