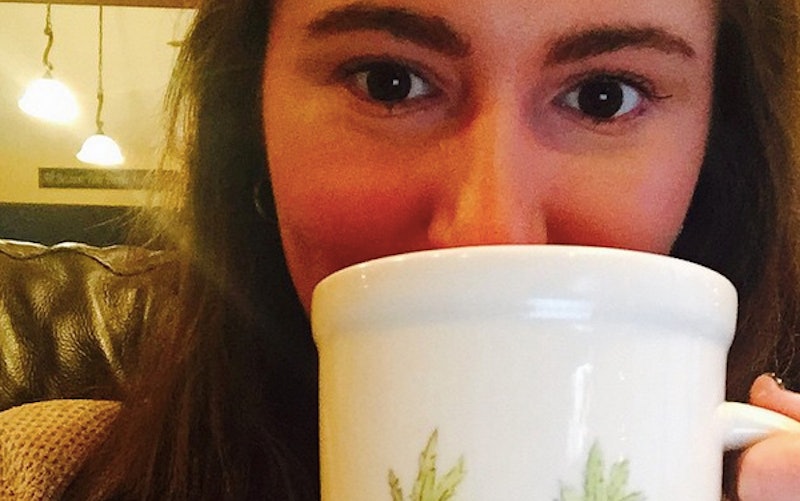 You could say that my relationship with gluten has been a rather tumultuous one, similar to Wiz Khalifa and Amber Rose's love story. I know the gluten free diet has been a bit of a fad in the past few years, but I've been struggling with an intolerance to gluten and wheat long before it became popular (and then eventually mocked again) to eradicate it from your diet. It's a shame, really, because before I noticed gluten wasn't doing good things for me, he and I were like Brad and Jen (the early years, obviously). We were attached at the hip. It was not uncommon for me to be seen scarfing down half a loaf of French bread before my pasta dinner.

But like a lot of beautiful relationships that you swore were going to last forever (Heidi Klum and Seal, I cry), it had to end. Please picture a piece of pizza dramatically falling out of my hand with "I Knew You Were Trouble" playing faintly in the background.

Even though I've known for some time that gluten makes me feel sick, I have had difficulties completely ditching it. Of course it's hard when you're young and in love (with carbs). And the fact that eating out is such a social activity did not help my situation, either. Whenever I tried to stay away, a friend would bring me a bagel after a night of partying or we would go to a restaurant where I couldn't not not order vodka rigatoni. It has become even harder since college because the cafeterias don't provide the best gluten free alternatives. And much to my mother's dismay, I am not much of a salad person. So throughout my young adult life, I would give in to the gluten and then deal with the consequences.

I've found that gluten affects me in a number of unfortunate ways. I've mentioned before that I have a pesky genetic skin condition, and gluten can exacerbate the symptoms. I discovered this after going to a nutritionist who told me it was best I stay away from foods packed with gluten because they tended to cause inflammation. And yes, I absolutely shed a tear or two after that conversation. In addition to it affecting my skin, I noticed as I got older that it would effect my mood, too. Whenever I was overdoing it by eating a lot of pizza, for instance, I'd feel instantly fatigued, anxious, moody, and even a bit depressed at times.

These are my main issues that I've personally experienced with gluten, but I am well aware that celiac disease can breed numerous unpleasant symptoms. Whilst some folks might just want to cut out gluten for weight loss purposes, others are plagued by fear of gall bladder malfunction or even miscarriage and infertility. An article written for the The New Yorker titled, "What's So Bad About Gluten?" relays that "nearly twenty million people contend that they regularly experience distress after eating products that contain gluten, and a third of American adults say that they are trying to eliminate it from their diets." So yeah, that's a lot of people.

But honestly, I am sick and tired of being sick and tired. So I took it upon myself to feel good again by cutting gluten from my diet for three weeks as a sort of experiment. Of course, I've gone through periods where I've been mostly gluten free in the past, but never for this long. This diet meant cutting out pizza, pasta, bagels, and the rest of my favorite foods. But I made this sacrifice (drama) so that I could find out once and for all how a gluten free diet would affect my overall health. Apart from one misstep (pizza, man), I went three weeks sans gluten, and here are the three biggest differences I noticed as told by Broad City GIFs.

1. My Skin Cleared Up

See those happy girls? That's how you feel when you have clear skin. After about a week and half of eschewing the gluten, I noticed that the rash I had had almost constantly throughout the winter started to disappear. The clusters of tiny, itchy, uncomfortable red bumps were literally (said in a Rachel Zoe voice) vanishing before my eyes. So, yay! This has really impacted my overall state of wellbeing and I couldn't be happier with the way my skin has been looking.

When I am eating foods that are heavy in gluten (and a lot of them) I definitely feel the anxiety and fatigue come on. I will feel out of it, nervous, have trouble thinking clearly, and generally just be a mess. With taking the gluten out of my diet almost completely, I almost immediately felt a lot lighter psychologically. Lately, I have had so much more energy and have been better at handling stress. And it has honestly been such a relief. You can read more about how gluten can have psychological effects here.

I don't know about you, but after eating a pasta dish or a donut I feel bloated as hell. My stomach doesn't exactly hurt but it feels uncomfortable and distended. And I generally just feel way too full and kind of icky. After eliminating the ga ga gluten, I have not experienced this sensation once!

So overall, I am definitely going to try to maintain this diet, because as you can see it has benefited me a bunch. However, I don't think it is necessary to be 100 percent gluten free all the time. The one time I splurged and got pizza after a particularly brutal hangover, I felt fine (other than a little bit bloated). But I already felt like crap so I wasn't too salty about it, ya feel me? The key with going gluten free is moderation. Unless you have something more serious like full blown celiac disease, I don't feel it's imperative that you completely avoid gluten. Remember that too much of something can definitely be a bad thing, but that complete abstinence is never fun, either.

This bread saved me. Enough said.

Makes a mighty good substitute for regular pasta. I ordered a pint of vodka sauce from my favorite Italian place and ate it with this at home!

For your sweet tooth, people!

More like this
19 Latinx Therapists & Mental Health Experts To Follow On Instagram
By Kaitlyn Wylde, Naydeline Mejia and Lexi Inks
Got Brain Fog? Here Are The Best Supplements For Memory & Cognition
By Carolyn Steber
The 9 Best Exercises For Piriformis Syndrome Relief
By Carolyn Steber
All The Benefits You Get From Sitting In A Sauna
By Carolyn Steber
Get Even More From Bustle — Sign Up For The Newsletter