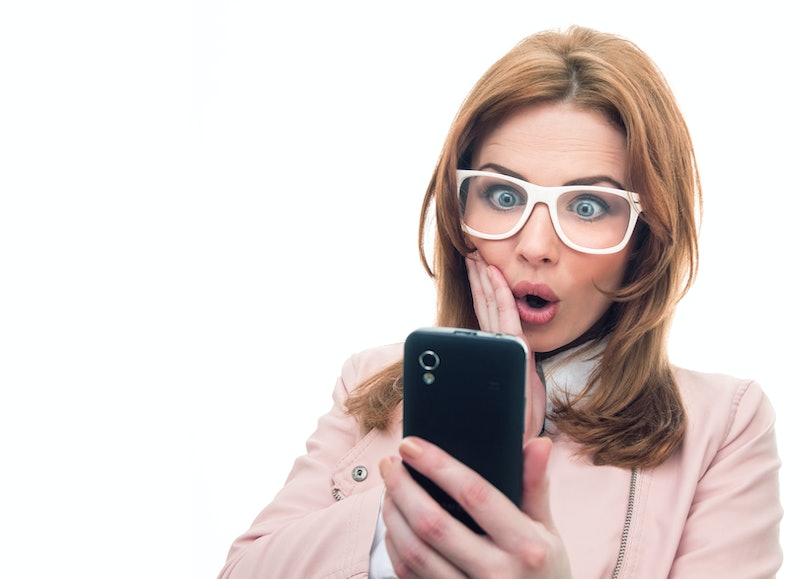 Among the many the things parents and their grown children don't often talk about are the… shall we say, steamier sides of dating and relationships. Since we're all adults, we all know that we're probably having sex; we just generally try to keep the thought as far from our minds as possible — and from both ends (I'm sure parents don't like to think about their offspring having it just as much as said offspring don't like to think about their parents having it). But Irish radio and YouTube personality Riyadh Khalaf just did what most of us would never in a million years do: He had his mom read his Grindr messages. And he caught it all on video. And you know what? It's pretty darn great — a perfect example of how relationships between parents and their adult children should work.

Khalaf, who shared his coming out story with Independent.ie back in 2010, downloaded Grindr to his phone three weeks ago. In the time since, he subsequently let it sit, undisturbed, for an hour every night to allow messages to come in. He didn't actually look at the messages once during that time, so this video documents the very first time he saw them — and, of course, the very first time his mother also saw them. Said Khalaf to Gay Star News, “It took me about a month to convince my mom to actually sit and film the video. As you can see, she's a super classy lady and was afraid she would come across in a bad way.”

But you guys? His mom kind of the best. Sure, she was a little shocked by the explicitness of some of the messages — but the only kind of judging that went on is the sort that pretty much everyone does when assessing online online dating profiles for possible matches: How nice they seemed, how good their spelling was, how attractive she thought they were, and so on and so forth. What it wasn't was any sort of judgment about LGBT people, rights, or issues. Supportive mom FTW!

The reaction to the video in general has been positive, too; noted Khalaf, “We've both been blown away by all the love and amazing comments. Our phones haven't stopped buzzing for over 24 hours!”

Before getting down to business, they wisely armed themselves with a few glasses of wine. Here are a few highlights from their adventures; scroll down to watch the whole video.

1. Ripping Off the Band-Aid

This still? It's pretty much the entire video distilled into one image. It's awkward, but it's all rather good spirited. These two clearly have a solid parent-adult child relationship, which is awesome. Would that all families could be like this, right?

“What does that mean?” asked Mom. “They want to play Monopoly together,” replied Son. How nice!

You're going to need it for that one. The moment the proverbial penny drops for Mom? Priceless.

Sometimes, there are no words.

As Mom points out, this piece of text “abbreviation” makes no sense. There are the same number of letters in “wan” as there are in “one,” so it's not really much of an abbreviation at all, is it? Let this be a lesson to us all: Good spelling and proper grammar will get you much farther in the online dating seen than hip Internet slang.

...If they're wearing a hoodie. Mom is totally sold on this one until she sees his choice of attire. Poor guy.

7. The Importance of Underwear

According to the comments on the video, Khalaf's mom might appear in more videos later on. too. I'll drink to that!

More like this
The 19 Best Tweets & Memes About Bisexual Awareness Week
By Lexi Inks
Are Quality Time & Gift-Receiving Love Languages Compatible?
By Lexi Inks
Why A Libra & Libra Couple Might Become Codependent
By Kristine Fellizar
10 Creative Sexting Ideas That Don't Involve Nudes
By Lexi Inks
Get Even More From Bustle — Sign Up For The Newsletter