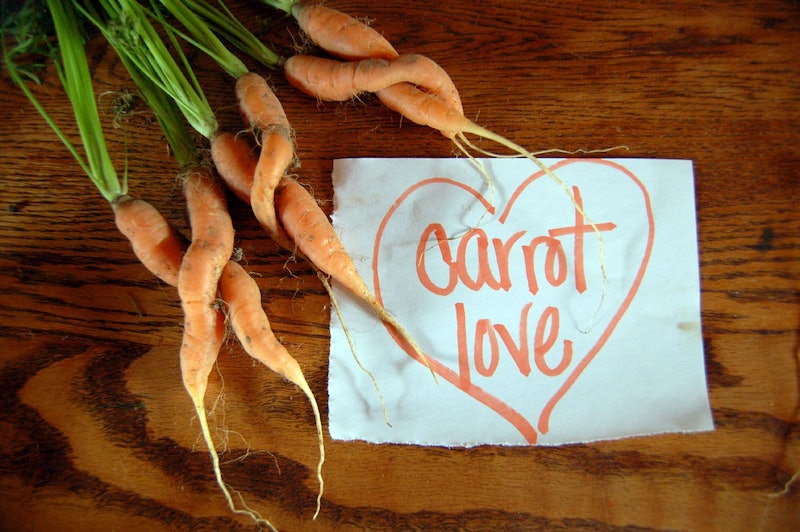 From the man who brought the world Seeking Arrangements comes an exciting — and by exciting I mean repulsive — dating app called Carrot Dating. The name seemingly comes from that whole, “use the carrot not the stick” saying, which begs the question what this guy thought men were doing to try to get dates before. Whatever it was, with Carrot Dating, men can now bribe women to go on dates with them.

Now, theoretically this could be used by either gender for either gender, but the promotional materials are all pretty heavily geared towards the “man lures woman” scenario. Wade just seems to have a knack for dating systems that are a little too reminiscent of prostitution. And, this whole thing just sounds so uncomfortable. You bribe someone for a date? How awkward is that? And yeah, I get it, dating is hard, but come on. Bribery? Whether it comes in the form of cash or the promise of a nice restaurant, it’s not exactly setting the stage for a successful relationship.

And that of course is the biggest problem with this app: It treats women as commodities to be obtained, not as people. If you want think of someone as a person, you respect their desire to either date you or not date you. The whole idea that you can circumvent around a woman's lack of interest — that a woman's lack of interest is something to be circumvented — is insulting and problematic to say the least. The clear underlying assumption is that women are not people, they are collectibles to be acquired regardless of what they might want.

And on top of everything else, Carrot Dating is just a ridiculous name. With a ridiculous promotional video. But we’ll let you see all the problems with that one for yourself.