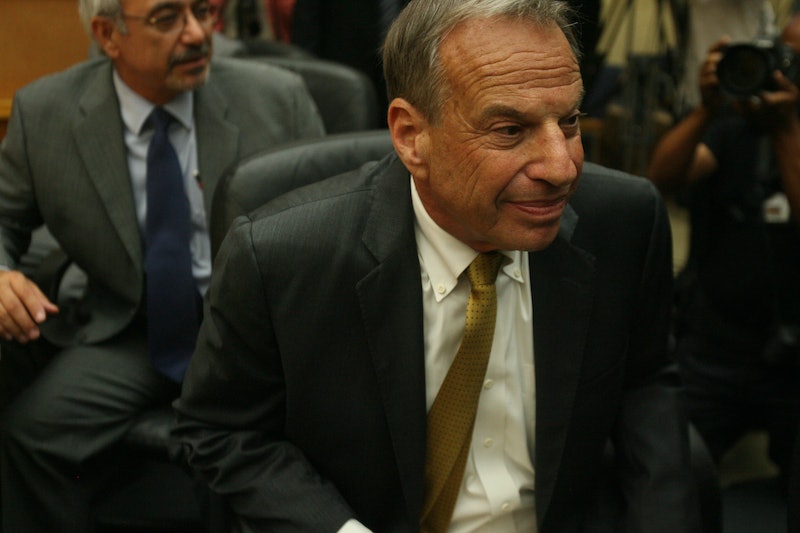 Former San Diego Mayor and known grandma-groper Bob Filner was booked into jail Saturday and released less than two hours later. The disgraced ex-mayor, who confessed earlier this week to one felony count of false imprisonment by violence, and two misdemeanor counts of battery, arrived at the Central Jail at roughly 7 a.m., and was on his way home by 9 a.m., according to San Diego County Sheriff's Lt. Dave Schaller.

According to Schaller, during the two hours at the jail, Filner had his fingerprints taken and was photographed for his mug shot. The procedure "basically entails you getting processed in for your criminal records," Schaller said. Although he'd been scheduled to undergo the process Sunday, Filner reportedly arrived a day early. It remains unclear why.

The Democrat, as you might remember, gained notoriety over the summer when he was accused of sexually harassing not one, not two, but an overwhelming 18 women while in office. In spite of holding out for several weeks — even, at one point, attempting to sue the state for not providing him with proper sexual harassment training — thanks to condemnation from national Democrats and hefty helping of public disapproval, Filner finally resigned less than two months ago.

On Tuesday, Filner agreed to a guilty plea of two misdemeanors and one felony connected to his involvement with three separate women, in exchange for three years' probation, three months of "home confinement," and, er, mandatory psychological treatment. Although the specifics are vague, one of the incidents reportedly involved kissing a woman, on the lips, without her consent while at a "Meet The Mayor" event; another involved grabbing a woman's butt at a public function (also, shockingly, without her consent). The third? Putting a woman in the now-renowned "Filner headlock" to restrain her while at a fundraiser.

Under his plea agreement, Filner will most likely be sentenced to three months of home confinement and three years of probation, during which he won't be allowed to vote, serve on a jury or carry a gun. His sentencing hearing is scheduled for early December.