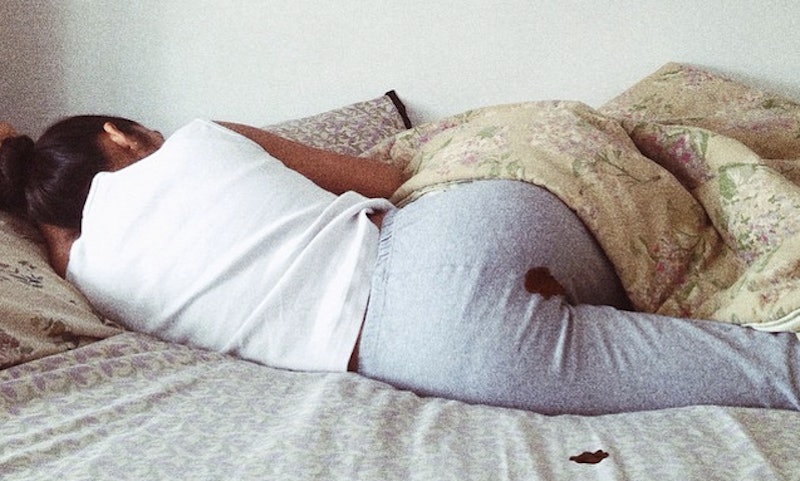 As we all know, even a glance at a female body that's not filtered to smooth, sexualized perfection can cause nausea, heart palpitations, and even death. In a bid to save us from ourselves, Instagram has consistently censored images of women they deem inappropriate, most recently when they flagged artist Rupi Kaur's photo of a woman menstruating through her clothes. It'd be nice to believe that our beloved photo-sharing app has our best interests at heart when they say a snap "violates community standards," but those words usually mean that a photo merely violates socially acceptable representations of the female form.

Now I'm not talking about full nude shots here, because the powers that be are just as likely to take down a dick pic as they are a full-frontal vag shot (save those for Twitter folks). However, Instagram is always stirring up controversy by pulling down images that depict the mundane realities of women's bodies, while leaving uber-sexual Kardashian-esque selfies unscathed. The photos they choose to remove (often because of prudish viewers who call foul and report an image) sends a very public message about the ways the female body is policed and invalidated in general. Although few of us technically have any say in IG's corporate policies, sometimes the ensuing uproar following a particular censoring does convince the company to re-cover a photo that has been deleted or an account that has been blocked — which is the silver lining to this whole frustrating cycle. Here are 5 times that Instagram tried to censor women's bodies.

Two days ago, artist Rupi Kaur's photo of a fully-clothed woman whose pants and bedsheets were stained with menstrual blood was deleted. After criticism swept through various news outlets, Instagram re-instated her account and she is back in business. Kaur's most recent post read: "we did it. you did this. your belief in the work. it's message. and your movement to not quiet down has forced Instagram to place both deleted photos back on my grid."

2. Australia shows too much bush

Earlier this year, Sticks and Stones, an Australian online magazine, had their account shut down because of bush. There were no genitals in the photo spread that caused the controversy, just some pubic hair peeking out of a bathing suit — something which nearly every woman has experienced in her life at some point. After the two models pictured inspired the #freethebush movement, IG reconsidered, and the Aussies are now back online.

Countless women have had their Instagram accounts shut down because of breastfeeding photos. While official IG policy says breastfeeding is allowed, there are still the trolls who complain about witnessing something that a major portion of the population has taken part in. The good news is that there are now official accounts dedicated to the subject, like @normalizebreastfeeding, which is doing an excellent job of representing mothers and children without stigma.

4. Non-conforming bodies are a violation

Time and time again, Instagram has made clear that acceptable bodies are thin bodies by taking down photos of those who do not conform to these standards. If a woman over a size 10 posts a bra and panties selfie, watch out, but if you're in the "proper" weight range, have at it, girl. The up side is that IG does admit when it is at fault, and has been known to issue apologies to the women after putting them through the whole ordeal.

5. Post-baby bodies are not OK

Lest you think their censorship of breastfeeding is just about the nipple, Instagram has also deleted photos of women showing off the changes to their bodies post-baby. The 4th Trimester Bodies Project is a group that was formed by women who want the world to know what motherhood really looks like. In response, Instagram is now a bit more accommodating of post-pregnancy bodies.