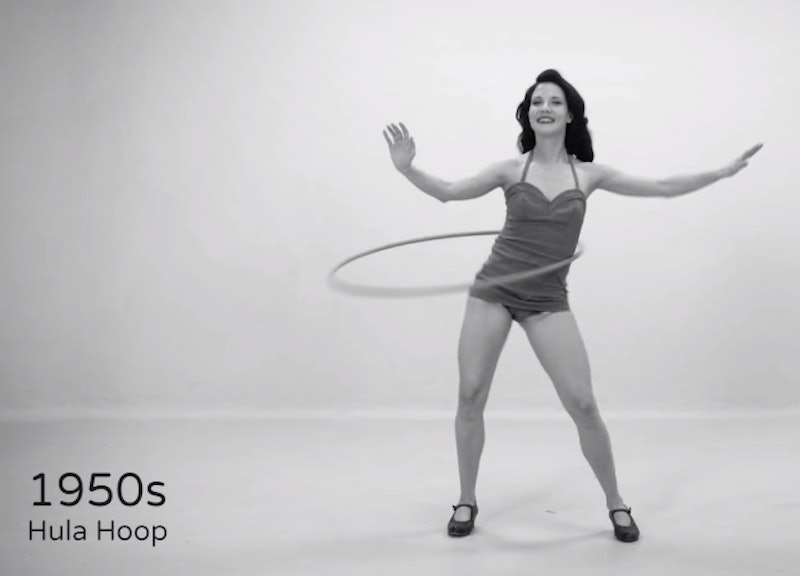 Does anybody know if you can order time machines on Amazon yet? I've decided I would like to journey back to the early 1900s. Usually I'm quite content with 2015, but after watching the Benenden Health video on the evolution of women's fitness trends over the past 100 years, I've decided that I'd much rather go back in time. See, exercise in the early 1900s didn't involve ellipticals or CrossFit or any of those shenanigans. It was literally just stretching. I feel like the turn of the century is a magical exercise fairy land where I have a free pass not to exert real effort ever again.

It is kind of fascinating, though, just how much more intense women's exercise has gotten over time. The video shows the main trend of each decade, taking us from the 1910s to the 2010s. Over time, it seems our exercise trends have gotten more and more hardcore. You can learn about more of the specifics into each era here, but the video does an amazing job of representing each trend in a montage full of retro exercise clothes that I oddly need for myself right now. Think you can guess which trend is going to dominate each decade? Let's see how well you do:

Stretching was the main form of exercise.

More stretching, this time with some flapper flare.

The Women's League Of Health And Beauty brought back a vision that "movement is life," and grew to be large and widely accessible even to middle and lower class families.

After the war, a lot of women began exercising in their own homes. Exercise became less focused on health and musculature and more on feminine beauty standards of the time.

The "Trim Twist" gained popularity in both home and office settings as a convenient, low-effort way to stay trim.

The age of Jazzercise. Is it possible to be nostalgic for an exercise era I never lived in??

You might recognize these from the dusty VHS collection undoubtedly harbored in at least one family member's home.

I could not tell you why the fanny pack was necessary for Tae Bo but I'm also not complaining.

If this is true then I blame Christina Aguilera for everything.

I didn't even know this was a THING until last year, when I attended my first Zumba class and quickly discovered it was basically a religion. (Also that I sucked at it.)

So there you have it, folks. Every decade we just get more and more ambitious with our fitness. I'm guessing that by 2020, though, we'll be working out with anti-gravity boots, so hopefully it won't get any worse. Here's the full video of our fitness evolution: