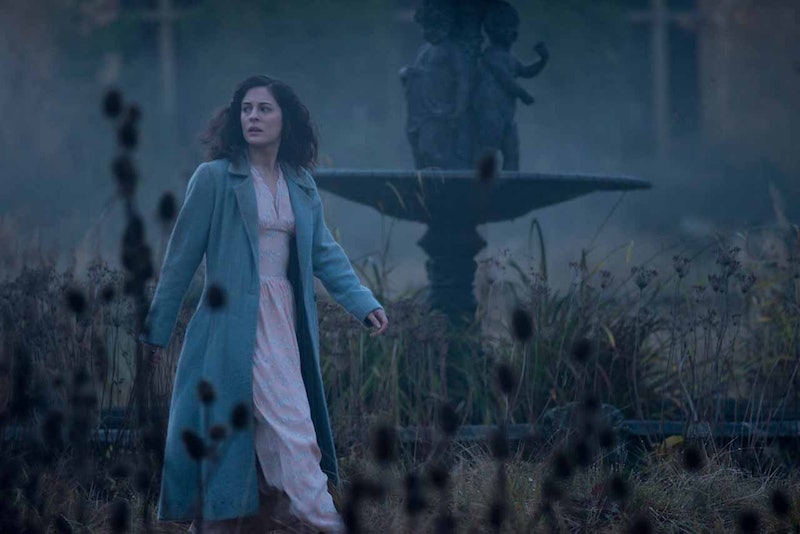 Even if your dreams typically consist of sunshine, lollipops, and magical unicorns who bring you authentic California-style burritos, you've probably had at least one nightmare where you were chased. You may not have remember who you were running from or what you were running to after you woke up, but odds are, you woke up shaken. The sensation of being pursued like a horror movie heroine — or, even worse, the horror movie heroine's best friend, who laughed when everyone said an ax murderer was on the loose — is not one we easily forget. But what do dreams about being chased actually mean?

Nightmares of being chased are the most common nightmares in the world, according to many researchers who study dreams — in fact, according to dream interpretation expert Lauri Loewenberg, it's one of the top five most common dreams period, right up there with being back at school and having your teeth falling out. Chase dreams — as well as nightmares about burglaries, being stalked, and other terrifying interpersonal interactions — use our in-born fight-or-flight instincts to express our fears, our anxieties about our day-to-day lives, and our relationships with our own inner selves.

And sometimes, frightening chase dreams are part of the way our brains react to the trauma of actually experiencing real-life danger — nightmares of being chased, followed, or otherwise pursued in a scary way are very common among people with PTSD.

The most important thing to remind yourself of right after you've had a freaky dream is that it's just a dream — it may be a sign of some internal issues that your brain is working on, but you're safe in the waking world. And if you'd like to dig into the cause behind that reoccurring chase nightmare — and maybe get back to those unicorn dreams — read on; with the help of dream interpretation site Dream Moods, we've assembled a guide to the meaning behind seven scary dreams about strangers, chasing, and feeling out of control.

1. Dreams Where You're Being Chased By Humans

As common as a cold (and just as unpleasant), our dreams of being chased by another person are typically tied into fears about specific situations in our waking lives. Perhaps we're avoiding the situation, and are trying to "outrun" it; sometimes, we're trying to run away from an aspect of our own personalities. The space between us and our pursuer can sometimes reveal details of what's bugging us — if the pursuer is gaining on you, it can be a sign that whatever issue you're trying to push out of your mind is only becoming more pressing.

And of course, chase dreams can reflect a recent trauma — dreams of being chased are a common symptom of PTSD.

2. Dreams Where You're Being Chased By Animals

Being pursued through your dreams by an angry lion, tiger, or emu? When animals attack our unconscious, it can often symbolize anger that we're repressing; in this reading of an angry animal dream, our subconscious has taken all of our bad feelings, and projected them onto a "wild" animal.

3. Dreams Where You're Chasing Someone Else

If you're the one doing the creepy chasing, it can be a sign that you're trying to "catch up" with other people in your life, whom you feel have left you behind. It's not worth it, Dreaming Self! Go find a nice Dream Bench and take a Dream Nap instead or something.

4. Dreams Where You're Being Stalked

Again, if you've experienced stalking in real life, dreams about the experience can be part of the way your mind is trying to deal with the trauma. But if you haven't, dreaming that you're being spied on and followed can imply that there's a major issue in your life that you're trying to ignore.

5. Dreams Where You're Being Held Captive

Dreaming that someone has trapped you or is holding you hostage can signal that you feel trapped or suffocated by some aspect of your daily life. Your job, your partner, or another element of your general existence might like it's beyond your control and you're helpless to change it — so you might as well be handcuffed to a chair (or so your subconscious mind thinks). Captivity dreams can also be linked to something you're in denial about during your waking hours — but on some subconscious level, you're convinced that it "controls" you.

6. Dreams About Being Burglarized

Dreaming that you house is being broken into or has been robbed can signify that you feel helpless in a certain situation in your waking life — perhaps you've recently undergone a life major change, and are still adjusting.

7. Dreams Where You're Fighting An Attacker

Of course, not all scary dreams involve feeling totally helpless. In some dreams, we may fight back against our weird faceless attackers — or at the very least, try to. Fighting in a dream can symbolize inner turmoil — the attacker you're fighting may symbolize an element of yourself that you're avoiding, or a situation in your real life that's bringing you trouble.

But if you try to fight in a dream, only to find that your arms are total limp spaghetti, it might be a sign that you have some self-esteem issues —you're literally "unable to make a move."

Alternately, sometimes the sensation of trying to physically fight in a dream — but not being able to — is tied to sleep paralysis, a phenomenon where you are half-awake from your dream, but still unable to move. So don't automatically assume that a lost dream fight means that you have low self-esteem — it may just mean that at that part of your dream, your cat was just in the middle of nudging you awake.

More like this
14 Scary Campfire Stories To Tell Your Friends
By Charlotte Ahlin and Kaitlyn Wylde
26 Ghost Story Podcasts To Get You Ready For Halloween
By Jessica Booth, Mia Mercado, JR Thorpe and Emma Carey
15 Easy Pranks To Play This Halloween
By Emily Kelley and Lauren Grant
The Spiritual Meaning Of Angel Number 000, Explained
By Kristine Fellizar
Get Even More From Bustle — Sign Up For The Newsletter