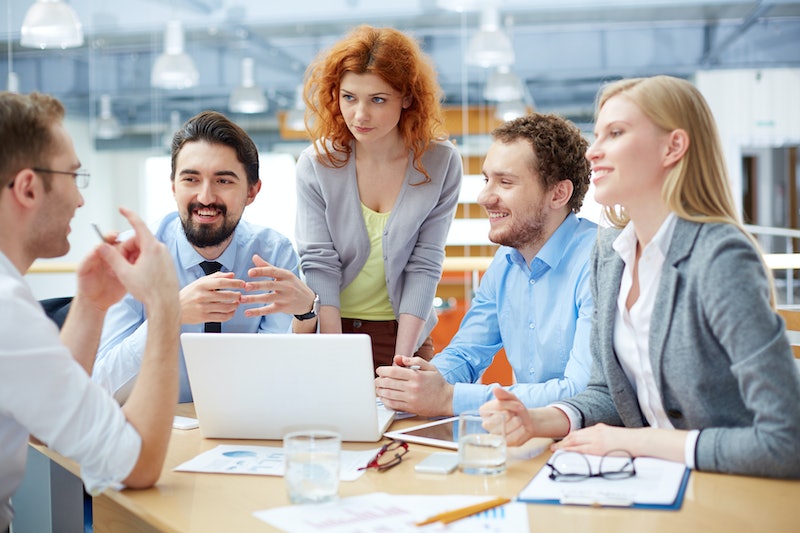 Thought you had your plan for "leaning in" all set? It may be time to reconsider, because succeeding professionally isn't all about developing your skills and negotiating raises. An under-recognized self-sabotaging mechanism is at work in the workplace, and it's harder to control than you'd think. Facial expressions at the office can affect how you're perceived at work, new research shows, so it's time to start evaluating yours for an overhaul.

As Dr. Alan Fridlund of the University of California Santa Barbara points out, the mechanism underlying facial expressions is fundamentally an adaptive one: your expressions give other people around you a good read of how you're feeling. And if other people know how you're feeling, they mostly care and respond to that positively, because humans are empathetic creatures.

But the workplace can be a strained environment, with simultaneous demands to compete and cooperate with your colleagues. Self-control can buy you time to decide how to react but, as Molly Russell points out on Levo League, work regularly offers some predictable opportunities for the involuntary look on your face to easily blow your cover. When you see someone in the office who you don't like, when you're given a whole ton of extra work, or when you're paid a compliment, your face may show an emotion that is strategically best kept under wraps (displeasure, rage, smugness).

I hate to say it, but women in the office probably still need to watch their emotional expressions even more than men, because women are expected to be moody already, and any shred of evidence will be taken to confirm that stereotype. And don't think about trading those unprofessional tears for a show of temper instead, because that works well for inspiring respect in working men, but not in women — and these norms don't appear to be changing that quickly.

Maybe this is a hidden advantage of telecommuting: you get to react to emails and calls in the privacy of your own home, and think things through before you have to (literally) face others. Alternatively, it's another downside to the drawbacks of "open office" plans — when everyone can see everybody else all the time, there's unfortunately less of a chance to screen the emotional responses that you don't really want to show. Human accomplishments are largely a story about the triumph of reason over emotion, so don't let a few poor reactions in the office cast a shadow over all your hard work.

More like this
Here’s Why Sagittarians Should Pursue A Career In Academia
By Nina Kahn
Black Women's Equal Pay Day Highlights An Upsetting Problem
By Brandi Neal
This Psychological Effect Might Be Keeping You From Hitting Your Goals
By Lexi Inks
The Spiritual Meaning Of Angel Number 000, Explained
By Kristine Fellizar
Get Even More From Bustle — Sign Up For The Newsletter