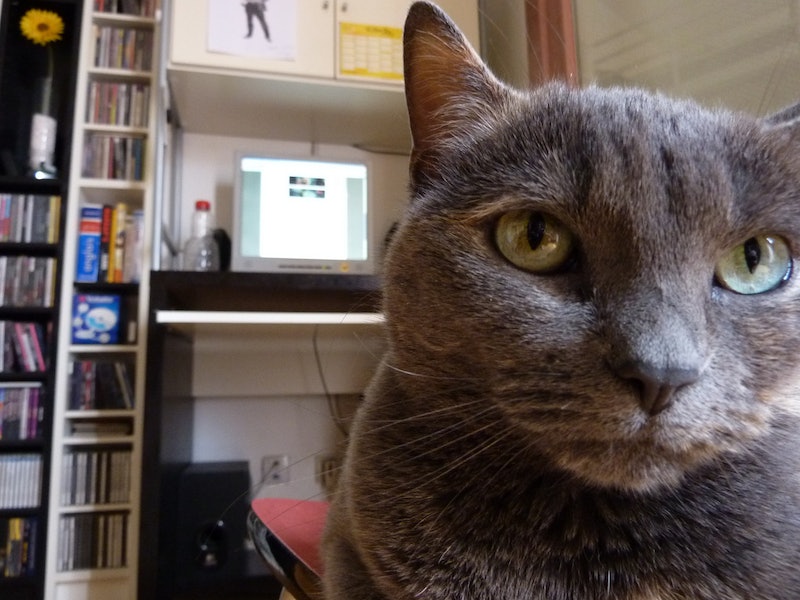 Sometimes it seems like cats exist purely as animate, sporadic decoration in our homes. They don't typically race to the door to welcome you home like dogs do, and I haven't met many cats who were capable of mastering any actual helpful-to-human tricks (although this kitty does a mean moonwalk). Cats might act like they lord over us mere humans in their repeat behavior but evidence keeps surfacing that suggests we aren't super different. For one, some kinds of special, scientifically-tweaked music may calm cats. Also, this photo of a cat recognizing its owner on video-chat may prove cats love technology as hard as us.

A 2013 study in Tokyo shows cats recognize their owners' voices. Although the same study didn't find much proof of the fluff-babies much caring when hearing those familiar voices, this photo below certainly seems to capture a sincere affection. The cat is first caught in the background, perhaps catching quiet hints of its owner's voice and then feeling inspired to get closer to the web cam. It gets closer and closer until it appears downright bamboozled, perhaps confused how its human got digitized and stuffed into this flat screen. Yes, kitten-face, technology is amazing.

Apparently this video-chatting-with-animals concept is fairly popular. That's why options like iCPooch exist, a combination gadget and app that allows pets and their owners to video chat. It even presents the option to release a treat from faraway. The coolest part? A 14-year old invented iCPooch.

But even when not specifically designed to them, animals still seem really interested in all our human tech toys. Below are some of the cutest, most ridiculous examples:

Violet the dog will murder this iPad fish

Perhaps one tip—if you plan to allow iPad access to your pooch—would be to keep their claws neatly trimmed. I'm actually cringing imagining the pricy screen damage possible here.

Practicing their hunting skillz, clearly. As it turns out, animal attraction to touch screens is just science.

A huge dog tries to headbutt a smartphone

It's all adorable parlor tricks until the claws and calloused paws come out.

Maybe if the dwarves looked a bit more like pellets it'd be more hooked? And it's not like the enchantment with technology ends with domesticated animals...

More mesmerizing than a mirror, for sure.

Another monkey gets pissed at a passcode, sends a mobile email

I know spirit animals are over or whatever, but if they weren't, surely this impatient little dude would be mine.

More like this
How To Turn Off Night Mode On Your iPhone Camera
By Emma Carey
Behind The Hilarity Of The "POV: You Walk Into My Room" TikTok Trend
By Lexi Inks
Here's How To Get Your iPhone To Update Automatically Forever
By Emma Carey
20 Smart Devices Under $35 That’ll Change The Entire Vibe Of Your Home
By Emma Carey
Get Even More From Bustle — Sign Up For The Newsletter