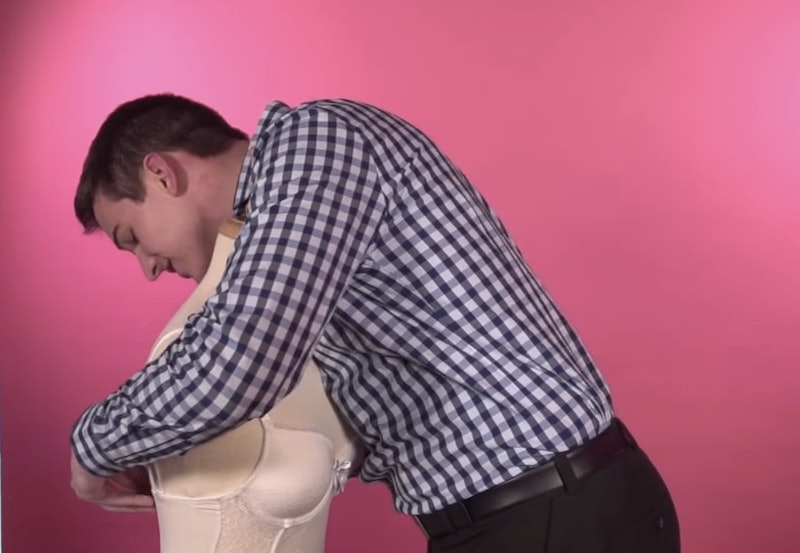 Nothing kills the mood faster than trying to unfasten your bra, only to find yourself stuck in it due to a complicated clasp. That said, though, if you've got the right sense of humor about the whole thing, it can also pick the mood right back up — so here: For your viewing pleasure, I present to you a video from Cosmopolitan featuring guys trying to unclasp different kinds of bras. It's probably the funniest thing you'll see all day, as well as one of the most informative. If knowledge is power, then knowing exactly how all these types of bras work can only help out during your next sexytime adventure, right?

To be fair, bras can be pretty confusing. We've all had moments when we got to try one on, only to find that we have no idea how we're supposed to get into in the first place, right? And that's with years of practice — so I can only imagine how complicated they must seem to gents who haven't gone their entire adult lives with them as a constant wardrobe fixture.

At the same time, though, I'm not going to lie: Bras these days are way less difficult to deal with than they were a century or two ago — or even a few decades back. Is anyone else dying to know what dudes during, say, the Victorian era did when faced with all that corsetry for the very first time? I mean, yes, it's likely that the well-off had servants to undo the underpinnings beforehand… but still. In my head, it's one, gigantic, and incredibly hilarious farce. Anyone else?

Check out a few of my favorites below, and scroll down to watch the full video. And if you're curious about the history of the bra, by the way, HuffPo published an excellent infographic last October with a few highlights in underwear history — it's worth a look if you're interested in that sort of thing. My, how far we've come!

Let's start with something familiar, shall we? Most guys have encountered a back-clasping bra before, although they may or may not have dealt with a halter strap. They more or less understand what to do; there's just one problem: The same sturdiness that prevents a bra from randomly coming unclasped all on its own is also what can make it kind of tricky to undo.

Hypothetically this one should be easy, right? After all, it's right out there in front — no need to fumble around in back where you can't see. However, many of the guys appear never to have witnessed a bra like this one in action before; when they can't find the clasp in the standard position (that is, in the back), many of them fail to realize it could be located somewhere else. The resulting wrestling match as they try to lift the bra off without unclasping it is awkward, to say the least.

It doesn't look too complicated from the front — but all those extra straps in the back can be disorienting. They're fairly evenly matched, though, so at least there's that.

Of course, this is only three of the four bra types against which the dudes face off; perhaps I'd better let the final one speak for itself, though. How well do you think they're going to fare against a corset? Watch the full video below to find out! Oh, and if you like any of the bras seen in the video (I like the front-clasping racerback one, myself), Cosmo has information about what they are and where you can buy them. Who knows? Maybe you can give someone a lesson in how to navigate each particular bra type yourself. It could be fun, right? ...Right?