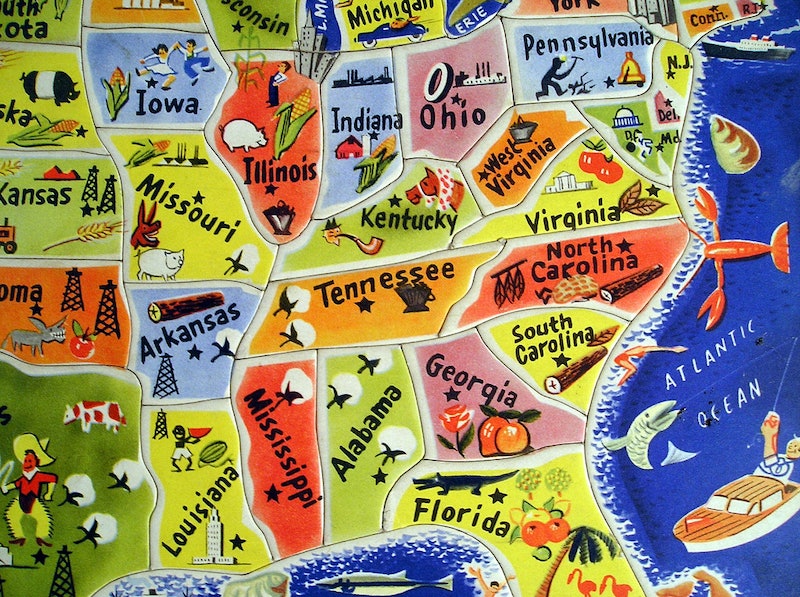 We all know it's a big county, but a new study reveals that the United States is less than united when it come to its residents' attitudes. In general, researchers found the nation divided along three distinct lines: If you live in a Midwestern state such as South Dakota, you might have an agreeable attitude yet conservative values when it comes to politics or religion. If you call Western states such as California or Oregon home, then you are more likely to be very open and liberal-minded. And if you live in a Northeastern state such as New York or New Jersey, you're probably aloof and uninhibited.

The researchers, headed by University of Cambridge psychologist Jason Rentfrow — an American expat — collected data over 12 years from 1.6 million people living in 48 states, excluding Alaska and Hawaii [sorry, you don't count], and the District of Columbia. The study, published in the Journal of Personality and Social Psychology, measured personality traits of openness, conscientiousness, extroversion, agreeableness, and neuroticism — or OCEAN. (Very cute, guys). The survey also asked people about their opinions on politics, interests, and music.

Using the gathered data, along with Census information, the three regions have been dubbed "Friendly and Conventional," "Relaxed and Creative," and "Temperamental and Uninhibited."

Which sounds to me more like "Bland," "Lazy," and "A-holes." I am a proud member of the A-holes region. Obviously.

Surprisingly — or maybe not? — West Virginia was labeled as the most neurotic state, Utah the least. Wisconsin took the prize for most extroverted (really, New York?), while Vermonters were most introverted. Washington, DC apparently scored highest on openness, while simultaneously scoring low on agreeableness (this is the history of the United States government in one sentence, no?) North Dakotans finished last on openness, which might help explain their insanely restrictive abortion legislation.

Time magazine created a nifty tool where users can take a quick questionnaire to determine which state they should live in, based on whether people see themselves as "extroverted, enthusiastic," "critical, quarrelsome," etc.

The results paired me with Rhode Island. Lame.

It'd be fine if the teeny tiny dot of a state took more than an hour to drive through and wasn't populated by Boston Red Sox fans. I tried repeatedly to fudge my answers, but Time's machine was intent on plunking me in the Ocean State. Fine. I am now accepting your suggestions for the best restaurants and beaches in Rhode Island (I also don't like seafood, sooo...)

You can take the test for yourself here.

More like this
You Can Stay At The 'Hocus Pocus' House On Airbnb
By Alexis Morillo
Craving The Beach? Here's Your Guide To A Solo Vacation In Turks & Caicos
By Alexis Morillo
The 19 Best Tweets & Memes About Bisexual Awareness Week
By Lexi Inks
This Psychological Effect Might Be Keeping You From Hitting Your Goals
By Lexi Inks
Get Even More From Bustle — Sign Up For The Newsletter