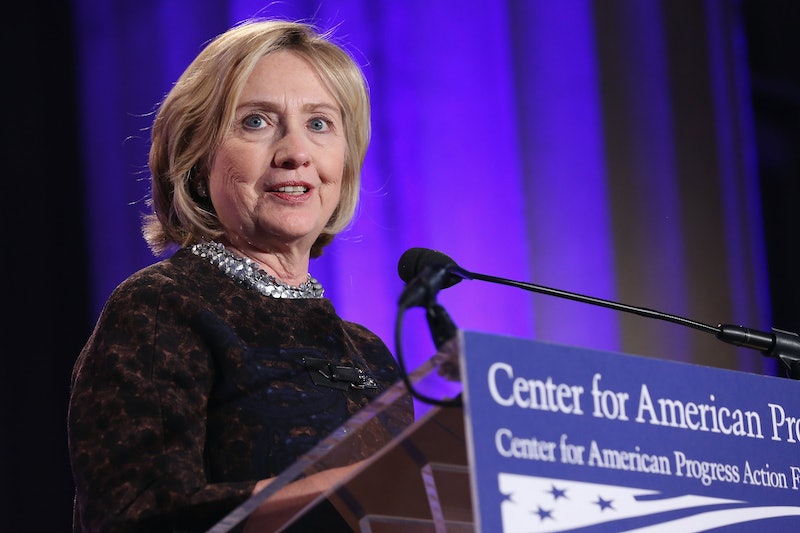 OK, we already knew it's not exactly a good time to be President Barack Obama. But now things aren't looking so good for Hillary either, which makes us sad: Both Democratic politicians are seeing their lowest approval ratings of all time, with Hillary at 46 percent and Obama at 42. Clinton's ratings don't bode well for the Party, since it's becoming increasingly clear that they're playing a long game to get Clinton into the White House in 2016. But there's a problem: does Clinton actually want the presidency? Upcoming book HRC: State Secrets and the Rebirth of Hillary Clinton suggests she doesn't: Clinton was apparently more than ready to leave public office last year, before Obama's re-election.

According to authors Jonathan Allen (of Politico) and Amie Parnes (of The Hill), Obama asked Clinton to stay on for another year on Nov. 29, 2012, onboard a flight to Asia. In an excerpt:

Hillary had long since told Obama that she didn't plan to stick around for his second term. But now, after winning re-election, he didn't want to let her go.

Hillary had proved herself a vital ally during the first term and the pair of one-time rivals had gotten into a rhythm. Why end a good thing? Also, Defense Secretary Leon Panetta had told Obama on Election Day that he was leaving — meaning the president would have to find new lieutenants for both of the top seats in his war council if he couldn't convince Hillary to stay put.

Would you reconsider, perhaps stay another year? Obama asked.

No, Hillary said. It was time for her to leave public office.

With current Secretary of State John Kerry coordinating (failing) Syrian peace talks in Geneva and in charge of (failing) negotiations between Israel and Palestine, Clinton would have had her hands full if she'd kept the post. But the resignation she submitted (because "it was time to leave public office," apparently,) as well as her low ratings, don't bode well for her willingness to run for the presidency in three years' time. After all, Clinton left her post with good approval ratings of 56 percent, plus only 25 percent disapproved of her performance.

So why the ratings drop now? Well, it's not exactly clear: Since resigning, Clinton's only made some speeches and done a New York Magazine cover story. It's not exactly a botched healthcare-reform roll-out, for example.

Speaking of which. Turns out President Obama's ratings are at an all-time low at 42 percent, just slightly higher than President George W. Bush's approval figures in the aftermath of Hurricane Katrina. It's mostly down to that attempt at a website, Healthcare.gov, which respondents said undermined their confidence in the law. Oh, and Syria, the debt shutdown, and the debt ceiling crisis haven't helped.

But with all this focus on the Democratic decline, no one's talking about the elephant in the room: The Republican ratings are also at an all time low, down to a 22 percent approval rating. Which begs the question: If everyone's at the bottom, who's going to win?

Lucky for our nation's sanity, we have about three years to sort it out.