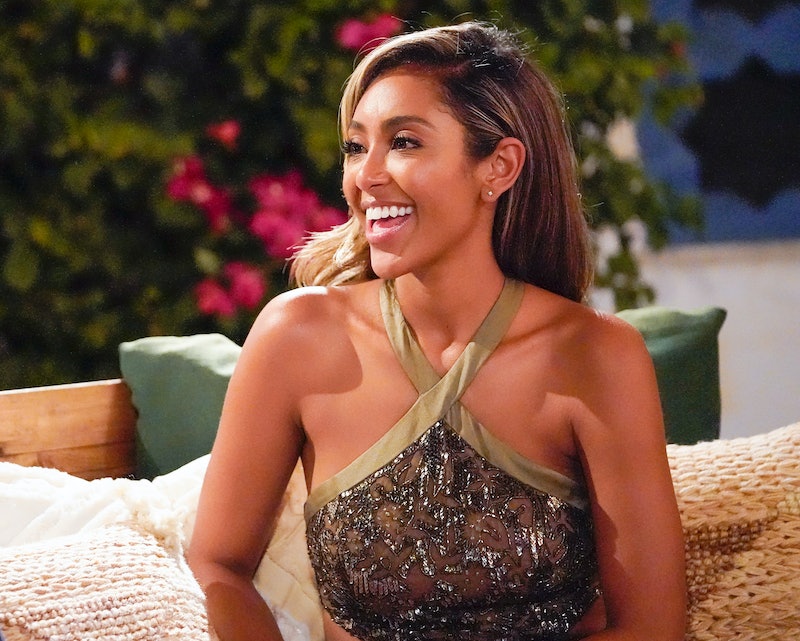 Nobody involved with making The Bachelorette expected that they would need to find a new leading lady just a few weeks into filming, but when it came time to make that decision, there was only one obvious choice. During a recent interview with Variety, ABC executive Rob Mills shared the real reason Tayshia Adams was chosen as the new Bachelorette, explaining that like Clare, she was ready to settle down and find true love on the show.

Explaining that because producers had already considered Tayshia for Bachelorette before deciding on Clare, Mills noted that the decision was "instinctual," once they had gotten to know the remaining men. "I don't think they're as different as you might think on the surface," he said of the two Bachelorettes. "Tayshia had been through a divorce, so I think there is a lot of maturity that comes with that, and she is super serious about settling down, just like Clare was, so it actually did not seem like a huge stretch for these guys."

"Also, you have to remember that we cast a lot of guys that weren't necessarily announced for Clare because she was announced as The Bachelorette so late," Mills continued, "so some of these guys would have been there for someone else that was chosen as the lead, anyway. It all ended up working out incredibly well, even though it provided some hurdles at first."

While he didn't offer up very many details about what happened once Tayshia took over as Bachelorette, Mills did tease that things worked out very well for the new leading lady. "[Tayshia's time is] just as emotional as Clare’s, but in a totally different way," he explained. "Tayshia really allowed herself to fall in love with multiple guys. It’s always such a roller coaster. At the end, there are a lot of heartbreaking, devastating moments. There’s not really a villain. It’s more like, “I want her to end up with him. Wait no, I want her to be with this guy!"

Mills wasn't the only person who praised Tayshia as the perfect replacement for Clare now that the hairstylist is engaged to Dale Moss; Tayshia's ex John Paul Jones shared his excitement at seeing her step out of the limo as the Bachelorette on his Instagram Story. "Go TayTay!!!!" he wrote, alongside a photo of him watching her big Bachelorette debut on the Nov. 5 episode of the show. Though the couple dated during the most recent season of Bachelor in Paradise, they ultimately called it quits in October 2019 due to their busy schedules and living on opposite sides of the country.

The new Bachelorette has also gotten the seal of approval from Clare herself, as the bride-to-be told Entertainment Tonight in October that she had been rooting for Tayshia to be the show's new leading lady before either one of them was cast on the show.

Tayshia, for her part, has been nothing but supportive of Clare and Dale's new romance. "GIRLLLLL!! Yassssss so glad you found your man!!!" she commented on Clare's Instagram post celebrating the proposal, adding that she was sending the new couple "all the love." As for whether or not Tayshia will also find her man on the upcoming season, fans will have to just keep watching and hope for the best.