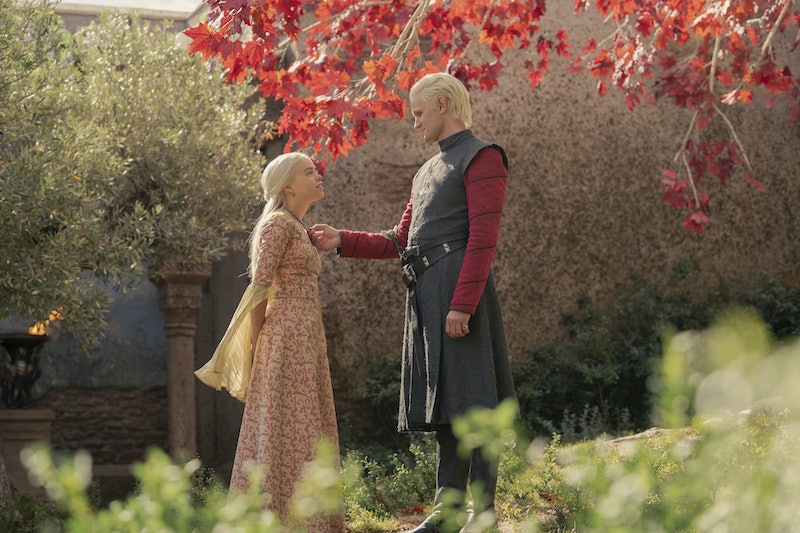 We’re still several days away from House of the Dragon Episode 5, which is probably a good thing given that many of us are still reeling from the events of last week’s episode. Absent were the usual swords and dragons, replaced by incest, broken vows, and severed relationships. With Daemon (Matt Smith) escalating his relationship with Rhaenyra (Milly Alcock) to an intimate level and the princess’ lying to her father and Alicent (Emily Carey), who knows what truth, if any, will prevail.

With new scandals and a brewing war on the horizon, here is what you can expect from House of the Dragon Episode 5, including its release date, time, plot, and trailer.

House of the Dragon Episode 5 makes its debut on Sunday, Sept. 18 on HBO. The upcoming chapter is due to premiere at 9:00 p.m. ET. And for those viewing in the U.S, Episode 5 will be available to stream on HBO Max at the same time, so that would be as early as 6:00 p.m. PT for fans on the west coast. According to HBO’s schedule, Episode 4 will air at 7:48 p.m ET, if anyone wants to rewatch last week’s episode.

House Of The Dragon Episode 5 Trailer

The latest trailer revolves around Rhaenyra and Laenor’s wedding, ushering in a “Second Age of Dragons.” A massive melee seems to break out at the wedding, while Viserys’ (Paddy Considine) health rapidly declines, the Hightowers plot Aegon II’s ascension, and Rhaenys (Eve Best) prepares for war.

We are officially halfway through the Game of Thrones spin-off. With only five episodes left, fans can expect the rest of the season to continue delivering episodes on a weekly basis. If House of the Dragon follows its usual schedule, this is when the final half of the season will air:

House Of The Dragon Episode 5 Title

Episode 5’s title is “We Light the Way,” the House Hightower motto. With Otto ousted as Hand of the King in last week’s episode, it’s certainly interesting that this episode would be named after his family’s motto. With tensions rising in King’s Landing, this title might be a clue involving Alicent.

House Of The Dragon Episode 5 Runtime

Episode 4 ran for just over an hour, clocking in at 62 minutes. According to HBO’s schedule, Episode 5 will be slightly shorter than last week’s, sporting a runtime of 60 minutes, which means fans should get ready for another hour in Westeros.

House Of The Dragon Episode 5 Plot

While Rhaenyra and Laenor’s wedding may be Episode 5’s main event, several other plotlines will be at play in this new chapter. The Velaryon navy and the Targaryen dragon fleet are about to unite, but despite the political power their union presents, Rhaenys, Laenor’s Targaryen mother, is nearly certain that Rhaenyra’s claim to the throne will result in violence. There’s to be a massive brawl at the wedding, as the trailer features Ser Criston Cole (Fabien Frankel) cracking skulls.

But what of the man behind the wedding, King Viserys I? Well, he’s spent several episodes physically decaying from cuts and gashes. In Episode 5, we can expect to learn that he may not be long for this world, which means the throne will soon be up for grabs. Even though Otto (Rhys Ifans) has been ousted as Hand of the King, he and Alicent will likely continue their plans to put Hightower blood on the throne, in fear of what Rhaenyra might do if she becomes Queen.