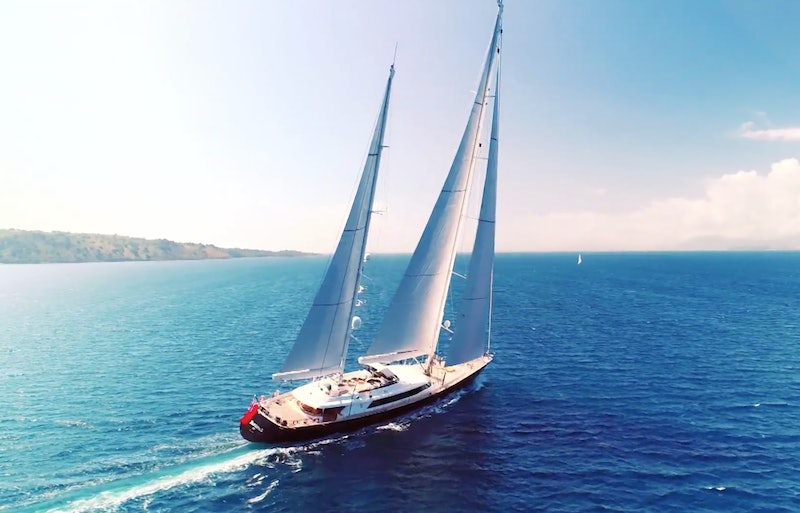 Unsurprisingly, the cost of a week-long vacation on the Parsifall III is pretty far out of the average consumer's price point. According to Charter World, Parsifall III costs between €195,000 to €225,000 a week to rent, which equals about $234,864 to $270,997 a week. For this hefty sum, guests gets five cabins, a drinking saloon and dining area, a jacuzzi, a swimming landing pad, and more. The ship itself can hold up to 12 guests and nine crew members, and in Below Deck Sailing Yacht Season 2, it sails around Croatia.

As for the ship's specifications, the Parsifall III is a lavish 177-foot long sailing yacht made in 2005 by the renowned Italian shipyard Perini Navi, with French designer Remi Tessier designing the interior. As Adam Glick told E! New's Pop of the Morning show in 2020, a large ship like Parsifall III can easily cost "30, 40, 50 million" to buy; the sails alone can cost $300,000 to replace.

Season 2 will likely explore the cost of repairing the ship, as a preview of Below Deck Sailing Yacht shows that the Parsifall III accidentally collides with a docking wall due to a "throttle malfunction," per E! News. "Hitting the dock like that can be a season-ending incident. It can be very serious," Captain Glenn Shepard said. He added that that's the first time he's ever crashed a boat, but it's "unfortunate that it happened" at all.

As for the yacht's name, it derives from the Arthurian knight Percival, who is most famous for being the hero who goes on a long-running journey for the Holy Grail — no doubt an analogy meant to make guests feel like traveling on Parsifall III will lead to the best experience money can buy.

"The [guest] requests get so bizarre," Glick told E! News' Pop of the Morning. "For example, we might be brought a king-sized bag of Skittles and told that we're only allowed to put out the orange ones. So now you've got crew members wasting incredibly valuable time picking out orange Skittles." In Season 1, Chief Stewardess Jenna MacGillivray mentioned that some guests have even asked her to tuck them in.

"Below Deck makes great drama out of the nuances of the kind of 'interior' service labor often deemed too feminine (and boring) to anchor pop culture narratives: event planning, waitressing, laundering, and cooking," Pier Dominguez wrote for Buzzfeed. "In the age of millennial burnout — and especially for the channel’s younger-skewing audience — it’s easy to identify with performing work under constant pressure, hoping to reap rewards subject to the whims of the 1%."

This is most exemplified at the end of every Below Deck episode, when the crew gets together to assess performances and find out how much the guests tipped them. If they did well, the rewards can be tremendous: in Season 1, a satisfied customer tipped $20,000 to Captain Glenn Shepard and his crew.

More like this
‘RHOSLC’ Star Jen Shah’s Arrest & Legal Drama, Explained
By Brad Witter and Jake Viswanath
'RHOSLC’s Newest Cast Member Has Tried To Become A Housewife Before
By Jake Viswanath
'Survivor' Host Jeff Probst's Salary Per Season After 22 Years Is The Real Winner
By Hugh McIntyre
Here’s What Went Down Between Romeo, Jill, & Kira Before 'Bachelor In Paradise'
By Grace Wehniainen
Get Even More From Bustle — Sign Up For The Newsletter

This article was originally published on Feb. 10, 2020