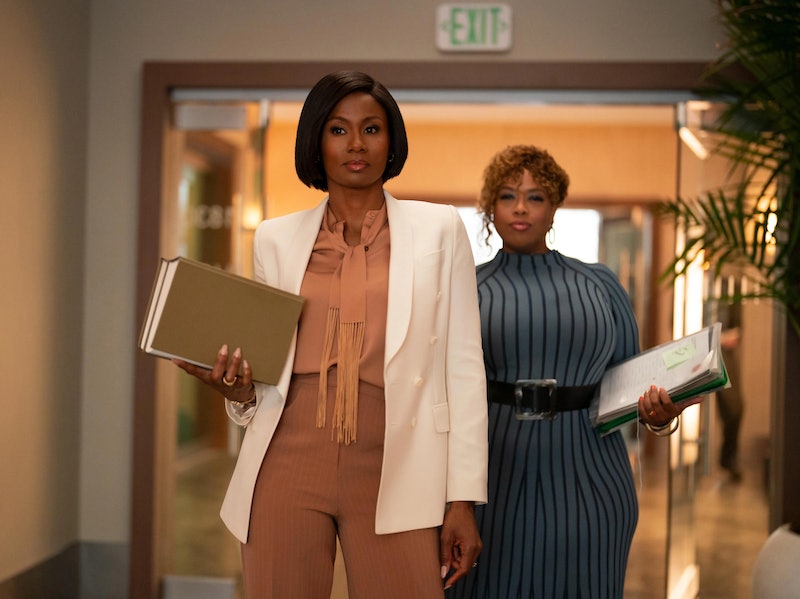 If you love a steamy legal drama, Hulu’s Reasonable Doubt is here to deliver — and it’s made by the people behind some of your favorite TV shows. Creator and showrunner Raamla Mohamed was part of the Grey’s Anatomy production staff before going on to write and produce for Scandal and Little Fires Everywhere (for which she earned an Emmy nomination in 2020).

Sensing a Kerry Washington throughline here? Yes, the fellow Shondaland alum is also involved in Reasonable Doubt. Despite earning Emmy nominations for her performances in Scandal and Little Fires Everywhere, though, Washington’s next TV project will be a behind-the-scenes role — she’s working on Reasonable Doubt as an executive producer and director. “It’s really fun to be able to be working with actors that I’ve known and loved for a long time,” Washington said in a Hulu teaser. “We’re really proud of the show. We’re walking through the world as this incredibly powerful Black woman does.”

She’s referring, of course, to Emayatzy Corinealdi’s lead character, Jax Stewart — “the most brilliant and fearless defense attorney in Los Angeles who bucks the justice system at every chance she gets,” per Hulu’s official synopsis.

Larry Wilmore, who co-created Insecure, will also serve as executive producer. Now that you know a few of the people involved in the making of the new drama, you may be wondering — who stars on Reasonable Doubt? Here’s the core cast you can expect to see when the show premieres on Sept. 27.

“You’ll judge Jax Stewart for her questionable ethics and wild interpretations of the law… until you’re the one in trouble,” teases Hulu. Known for starring in Ballers, The Red Line, and Ava DuVernay’s Middle of Nowhere, Corinealdi now leads the Reasonable Doubt cast as a powerful criminal lawyer — who, ironically, loves criminals, she reveals in the series trailer.

While Reasonable Doubt is an original story, Corinealdi told FabTV that her character is based on Shawn Holley — the Los Angeles attorney who was a member of O.J. Simpson’s defense (the “Dream Team”) in the 1990s. Holley also serves as executive producer on the series, BTW.

Queen Sugar’s McKinley Freeman plays Lewis Stewart, Jax’s husband from whom she is currently separated. Freeman opened up to Glitter Magazine about his character’s unique dynamic with Jax. “Working with Emayatzy and dealing with Jax on a daily basis, it’s very honest, because there’s a lot of men and women in relationships where there’s certain things that don’t necessarily go the way you’d like them to go,” he explained. “But the value of that person in your life far outweighs the thing.”

Jax loves bad guys — and Michael Ealy loves playing them, he recently told REVOLT. “You’re able to have more fun,” the Bel-Air and Stumptown star explained. “You’re never the moral compass, and you can go even farther with your character. Typically, when you’re the hero, you’re a little bit hampered due to having to be morally sound.”

It’s not super clear whether Damon — the character Ealy plays on Reasonable Doubt — errs more on the hero or villain side of things this time around. In the trailer, Damon seems to be a former client of Jax’s who was wrongfully convicted. However, he doesn’t mind her penchant for people on the wrong side of the law — and even leans into it at one point. “I thought you liked criminals,” he reminds Jax, as she tries to steer him away from admitting to a crime. Clearly, it’s complicated!

One of Jax’s clients is Brayden Mitchell, played by Sean Patrick Thomas — making Reasonable Doubt somewhat of a Save the Last Dance reunion, as both Thomas and Washington worked together on the 2001 film. “We were joking on set that like, you know, now we’re grown-ups — before we were babies, and now we’re grown,” he told Bonnie Laufer. “I’m just so proud of her ... on set, as a director, [she has] such confidence, such command.”

While Thomas might have been the romantic hero of Save the Last Dance, his role in Reasonable Doubt is much more complicated. Brayden is accused of murder, and Jax seems to reluctantly take him on as a client — but given her own self-professed love for criminals, who knows what will go down?