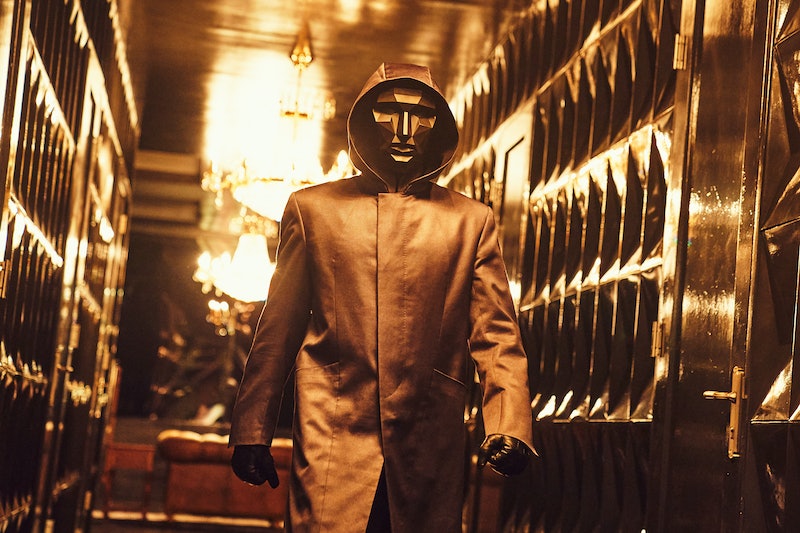 After the heartbreaking (and very twisty) Squid Game ending, you might be trying to make sense of everything as Gi-hun is still doing himself. The sinister reveal that friendly, old Player 001 was actually behind the games all along adds a new layer of horror to the series — while Gi-hun’s realization in the train station that the games are, of course, still going on perfectly sets up the plot for Squid Game Season 2. But is that actually happening?

Series creator Hwang Dong-hyuk has been thinking about it, he recently told Radio Times, and even has a “rough framework” but doesn’t want “people to get disappointed over the new season.” (Seems impossible, but OK.) If Season 2 does happen, Oh Il-nam is a character Dong-hyuk would like to revisit and “reveal a little more about his past story.”

One more thing to know about Dong-hyuk? He’s very down to listen to — and pull inspiration from — “intriguing” fan theories, like TikTok user lucy.what1’s suggestion that people who pick the blue card before the games become players, and people who choose the red card become guards. “I will try to look up those many ideas,” he told the outlet, “and, of course, if there are any good ones, I can bring them into the story ... Or maybe I can even ask the fans on social media to give ideas.”

There’s your invitation! Not like you needed it — many Redditors already got a head-start on concocting their best theories for Squid Game Season 2. Here are just a few of them.

Gi-hun Will Put An End To The Games

As the extended epilogue in Squid Game’s final episode proves, life after the competition isn’t that sweet for Gi-hun. His mom — his catalyst for getting back into the deadly contest — has died, and with her Gi-gun’s motivation to spend any of his hard-won wealth. Now, equipped with an iconic new look, he seems keen to prevent any more people from being treated like “horses,” like he was.

According to Redditor 7DSPride, Gi-hun was fated to stop the games from the start. Being the last contestant (456) “represents the end of the Squid Game as a long-running institution,” compared to 001, who symbolizes the games’ origins. By this logic, Season 2 could see Gi-hun carry out a mission to stop the deadly tradition. But probably not without a fight...

There Could Be A Hunger Games-Style Twist

If you’re a Hunger Games fan, you probably noticed several similarities between that franchise and Squid Game — from the heartbreaking alliances to the sadistic (and weirdly costumed) powers that be watching everything unfold below. For Redditor badnan5410, the similarities might spill into Season 2 with a “tournament of champions” between former winners à la the Quarter Quell in Catching Fire. This would include the Front Man, In-ho, badnan5410 writes.

After revealing his true identity as the Front Man, In-ho shot his detective brother, Jun-ho, who fell into the ocean. But does that mean Jun-ho is really dead? Not for Redditor Turgon19, who writes that “the story with him and his brother is probably not over yet.” Turgon19 noted that Jun-ho was “shot in a pretty non-lethal area,” similar to where his brother was injured moments before, and could have floated back to the island. With the intel he acquired (which may or may not have actually been sent), Jun-ho could be a powerful player in Squid Game Season 2. Dong-hyuk seems game to explore that dynamic a bit more, too, telling The Times he’d be interested in exploring “the story of the Front Man” (of which Jun-ho seems a natural part) should there ever be a Season 2, as Den of Geek reports.

Speaking of In-ho, just how did he go from winner to Front Man in such a short period of time? It’s delicious fodder for Season 2, and however it happened, Redditor onetoomanynights thinks a similar fate could be in store for Gi-hun. “Season 2 will probably have a classic ending where the main character becomes the evil guy,” onetoomanynights writes, suggesting that Gi-hun will kill the Front Man and take the title for himself.

Though becoming Front Man after experiencing the violence of the games might seem an odd character arc for Gi-hun, onetoomanynights suggested that In-ho could’ve felt similarly after his own victory but “turned dark” due to unknown circumstances. Either way, the smiley, kindhearted Gi-hun is forever changed. As Dong-hyuk confirmed to Radio Times, his new, fiery hair “represents that he will never be able to go back to his old self” and “also [serves as] a sign of his rage.”

Colorful Clues Have Been Hiding All Along

If you’re wondering how Season 2 might play out, revisit Season 1 with an eye toward all those vibrant colors. As Redditor ModestyGideon suggests, they could represent Squid Game’s key themes. Per the theory, which ModestyGideon says they translated from a Korean community site, cyan represents people, magenta represents systems, and yellow represents money. The Front Man’s mask is black because he’s a culmination of all, while red blood represents the system’s pursuit of money. Does that mean Gi-hun’s hair hints he’s part of the system now, or...? *Cue confused math lady meme.*

Whether or not these theories play out in Squid Game Season 2 (or if there’s a Season 2 at all) remains to be seen, of course. Until then, start your rewatch because there’s still plenty to talk about.

More like this
Nicola Coughlan Shared A Lady Whistledown Excerpt From ‘Bridgerton’ Season 3
By Grace Wehniainen, Alyssa Lapid and Sam Ramsden
Watch The Thrilling Teaser Trailer Of 'Shadow And Bone' Season 2
By Gretchen Smail and Jack Irvin
Netflix Reveals First Look At Wednesday In The 'Addams Family' Spinoff Series
By Bustle Editors
A New 'And Just Like That' Table Read Pic Confirms A Key Character's Return
By Jack Irvin and Grace Wehniainen
Get Even More From Bustle — Sign Up For The Newsletter