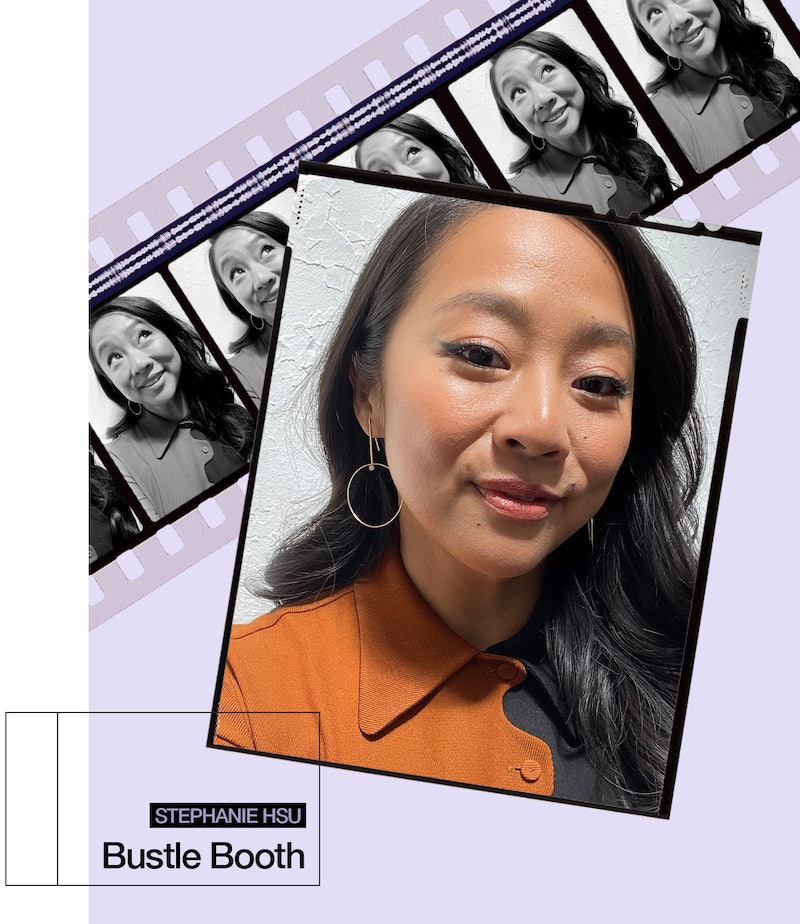 If the multiverse is real, actor Stephanie Hsu likes to imagine there’s a Stephanie out there who runs her own little flea market out of a barn, having built on her childhood habit of rifling through the Salvation Army dollar bins. Or maybe she’s on Saturday Night Live alongside her friend and NYU classmate Bowen Yang, having persevered through the PBR-powered, sticky-floored midnight comedy sets that, in our universe, put her off from that path. Or in a very, very different world, maybe she’s just a rock. Hsu fantasized about that one back before lockdown, as she was juggling eight shows a week in the Broadway musical Be More Chill with shooting Season 3 of The Marvelous Mrs. Maisel. “I was like, I just want to go home, make my own meal, and be a rock,” the 31-year-old tells Bustle.

In Everything Everywhere All at Once, she is a rock — and a martial artist, and a piñata, and a salsa dancer, and the leader of a bagel-worshipping cult, depending on where in the multiverse her character is at any given moment. Though the film follows Michelle Yeoh’s Evelyn, a harried laundromat owner who’s drawn into an apocalyptic battle, it’s Hsu’s character Joy, Evelyn’s queer, rebellious daughter, who is the story’s emotional core.

It helps that Hsu can relate to Evelyn and Joy’s complex and sometimes fraught mother-daughter relationship. “Trying to get through to your family and failing at every turn is something that I feel like many of us have experienced before,” she says. With a dearth of Asian representation on screen, Hsu’s own mom was initially unsure if she could make it in Hollywood. But the Torrance, California-born actor went for it anyway, studying experimental theater and improv at NYU’s Tisch School of the Arts before joining the Off-Broadway Atlantic Theater Company.

She never set out to be a star, but the limelight found her anyway. She appeared on Broadway as Karen in The SpongeBob Musical and later as the lead in Be More Chill, and went on to play Joel’s new love interest Mei in The Marvelous Mrs. Maisel. It was the latter role as Maisel’s first Asian lead that prompted Hsu’s mom to change her tune toward her daughter’s career path. “I think she started to really realize how the things we do in this industry of storytelling have impact on a lot of people,” Hsu says, recalling how her mother once overheard tour bus passengers discussing her character Mei. Having an impact is partly what attracted her to Everything Everywhere All at Once: It’s a film that centers an Asian American family, but isn’t just about the “identity of Being Asian, with a capital B capital A,” she says.

Working on the new movie, Hsu was able to use her rolodex of skills, just like her character slips through a catalog of alternate selves. She hung out with costume designer Shirley Kurata and crafted jewelry for Joy out of computer wires, ad-libbed some of her lines, and came up with a short ditty that’s going on the film’s 49-song soundtrack. (“I can’t believe I’m on an album with Mitski, Andre 3000, and Moses Sumney,” she says with a laugh.) And of course, she acts alongside the iconic Yeoh, who just happens to be her mom’s favorite actor. Hsu imagines her mom will love seeing her share the screen with Yeoh — even if some of their scenes go a little off the rails. “[Swinging] bloody sex toys at her favorite actress. That's your daughter,” Hsu says. “That's me, Mom.”

Get to know more about Hsu in her Bustle Booth questionnaire below.

Black. Or an oat milk cappuccino when I’m feelin’ Fan-C.

Sagittarius Sun/Scorpio Cusp depending who you ask, Moon in Pisces, Rising Aquarius.

The Worst Person In the World, C'mon C'mon, and... I'll be honest... Everything Everywhere All at Once.

She is a really good human.

More like this
Gassed Up Promises All Things Action, Risk, & Redemption
By Frances Stewart
On 'Industry,' Marisa Abela Takes Control
By Morgan Leigh Davies
Tacos Are Chef Kay Kay’s True Love Language
By Maxine Harrison
Jonah Hill Explains How His Anxiety Attacks Will Change The Rest Of His Career
By Grace Wehniainen
Get Even More From Bustle — Sign Up For The Newsletter