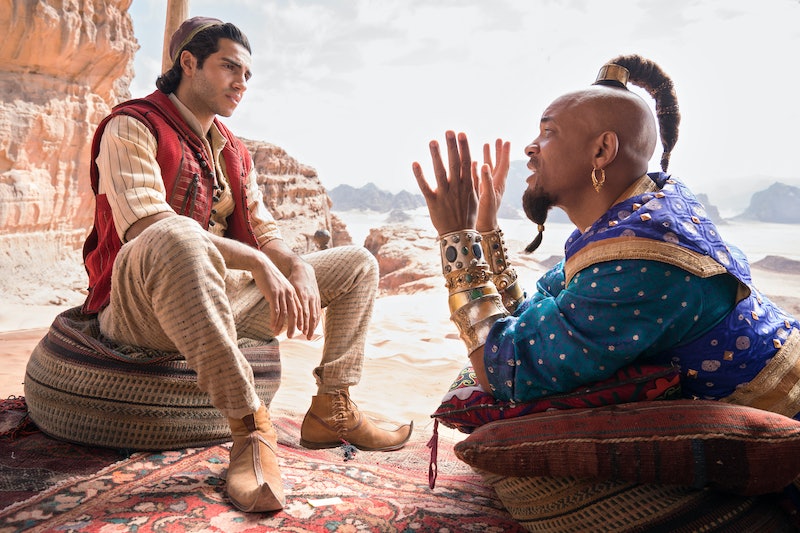 Disney is known for putting callbacks to their previous movies into the ones that come after. It's somewhat of a game to find all of the Easter eggs that the animators managed to sneak into the movies. There's Pumba, the warthog from The Lion King, appearing as a gargoyle in The Hunchback of Notre Dame, Rapunzel and Flynn Rider from Tangled attending Elsa's coronation in Frozen, and the King and Grand Duke from Cinderella as guests at Prince Eric's wedding to Ursula (in disguise) in The Little Mermaid. There are also plenty of Disney Easter eggs in the new Aladdin, proving that this isn't just an animated trend.

The original 1992 animated Aladdin was a part of the references tradition too. Since the Genie could turn into anything, the Disney catalogue was a perfect place to mine for some fun references. When the Genie wants to call Aladdin a liar, he transforms into Pinocchio, complete with growing nose. Sebastian the crab from The Little Mermaid pops out of a cookbook. The Beast from Beauty and the Beast can be seen in the Sultan's menagerie of toy animals. And Genie sports a Goofy hat when he heads out on vacation at the end of the movie.

The live-action version isn't any different, packing in a ton of nods that Disney super-fans will love searching for. Here's what we spotted — spoilers ahead!