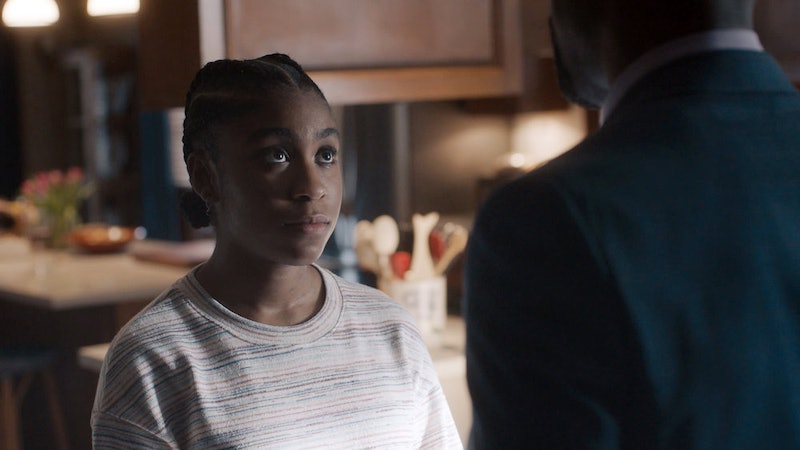 Spoilers for This Is Us Season 5, Episode 9. In the present timeline, the storyline is currently centered on Kevin and Madison's newborn twins and Kate's newly adopted daughter. But in the flash forward on This Is Us, Deja is the one who's pregnant and expecting a baby. It's the first time fans have seen adult Deja in these flash forwards, along with adult Annie. She drives Deja to Kevin's house where the Pearsons are meeting up to see Rebecca. Annie also seems to be the only one who knows that Deja is pregnant.

"I know it's early, and I know you're not telling anyone," Annie says before giving Deja a baby toy to celebrate the life event. Randall later asks if Deja is okay, but she just says that she's "fine," so it doesn't seem like she's told Randall yet. He'll probably be thrilled, because a lot of Episode 9 was about how much Randall loves adding new members to his family tree.

The flash forward is thought to take place sometime around 2032 or 2034, which would make Deja in her mid-20s. She looks to have a good job as some sort of medical intern. The episode opens with her in the hospital and she's wearing a lab coat while working a "labor and delivery rotation." She seems less than impressed with that day's work, though, even rolling her eyes at the doctor leading them through their paces. "You're not even going to pretend to be interested?" one of her colleagues asks her. "It's babies. It's not that complicated," Deja tells him. But it does seem to be a little complicated for her, because she can't even stand to be on the floor. She tells her colleague that she has to go and to cover for her. It's worth noting that right before she excuses herself, a patient is seen leaving the hospital with multiple newborns. Maybe Deja is extra stressed because she's pregnant with more than one baby?

We don't know who the father might be in this future timeline. Perhaps Deja and Malik did make it from their teen romance into adulthood. That doesn't seem all that realistic, but Malik is mature for his age and he and Deja do seem to really like each other.

Or maybe the father is the male colleague that Deja was talking to in the hospital. Perhaps it's someone fans haven't met yet. Whoever it is, it seems like there is some hesitation surrounding this pregnancy for Deja. She hasn't told anyone besides her sister, and she seemed uncomfortable with the topic of babies while in the hospital. Perhaps this isn't a welcome announcement for her. It probably does come with a lot of emotions considering that Deja's own birth mother wasn't able to care for her in the end. Maybe Deja is worried about her own parenting skills.

Fans won't get more information until another flash forward, but in the meantime there's plenty to speculate about regarding the newest Pearson on the way.

More like this
Shonda Rhimes' Net Worth Makes Her One Of The Wealthiest People In TV History
By Hugh McIntyre
'The Rings Of Power' Episode 7 Will Feature An “Unlikely Pairing Of Characters”
By Grace Wehniainen
'Firefly Lane' Season 2 Will Be The Show's Last — But There's A Twist
By K.W. Colyard and Grace Wehniainen
The ‘Kevin Can F**k Himself’ Season 2 Finale Twist Is A Full Circle Moment
By Grace Wehniainen
Get Even More From Bustle — Sign Up For The Newsletter