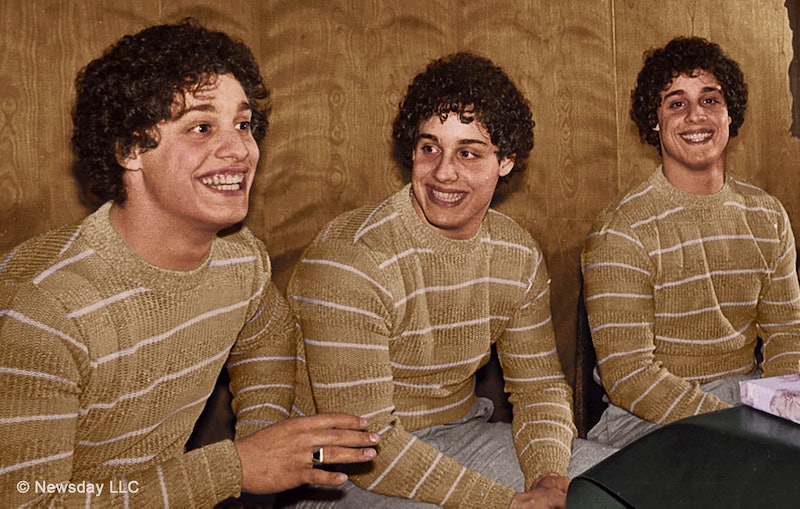 Strange stories are everywhere. In a time when people can log onto websites with endless lists of bizarre and macabre tales, it's super easy to get reading about the more unusual stories out there. Some, however, are not only unusual but also desperately sad. Take, for example, the story of the identical triplets who were separated at birth, David Kellman, Eddy Galland, and Bobby Shafran. But where are Bobby and David from Three Identical Strangers now?

The triplets, who were separated at birth and adopted by different families, ended up in very different circumstances. However, once reunited, they quickly became close and even went into business together, opening a restaurant in New York City called Triplets Roumanian Steakhouse, per New York Post. They were well-known personalities and became media darlings owing not only to the bizarre story of their separation, but also the bizarre serendipity that was their reuniting.

Eventually the brothers started families of their own. As the New York Post reports, Kellman married Janet and had two daughters (Ali and Reyna), Shafran married Ilene had a daughter (Elyssa) and a son, (Brandon), and Galland married Brenda and had one daughter (Jamie).

Sadly, however, Eddy Galland, who is said to have shown signs of living with depression, tragically died by suicide at the age of 33, the Mirror reports. The other two brothers, Shafran and Kellman, no longer work at their co-owned restaurant. The New York Post reports that Shafran is living in Gravesend, Brooklyn, and working as a lawyer. Kellman in New Jersey and in the process of a divorce. He works in life insurance, Medicare, and annuities. Kellman has stayed in touch with Galland’s wife and daughter. Kellman told the New York Post: "My daughter and Jamie are extremely close."

But how did all of this happen? How did three identical siblings end up separated and then reunited? Three Identical Strangers explores this sad and shocking story, as well as the media sensation it caused and the murky secrets behind it all.

One shocking thing about this story is that none of the adoptive families had any idea that the other siblings existed. Had it not been for a chance encounter between Shafran and a former roommate of Galland, perhaps none of the details of this story would have come to light. Nor the other shocking sub-plots it revealed.

During the course of the Three Identical Strangers, viewers find out that the boys were separated on purpose. They were born in Long Island in 1961 and given up for adoption to an agency called Louise Wise Services. It's there that an order was made by the well-known psychologist Peter B Neubauer as a part of his own top-secret nature-versus-nurture experiment. The triplets were not the only victims of this experiment, with several other identical children being separated and studied throughout their childhood. Adoptive families were simply told that their children were to be a part of "a developmental study."

The findings of the experiment were never published, nor were the identities of the "private Washington charities" that funded it, the Guardian reports.

This documentary is completely mind boggling, with twists and turns that never seem to end. The Identical Strangers is a film not to be missed.

Stream Three Identical Strangers on All4.

This article was originally published on Feb. 28, 2019