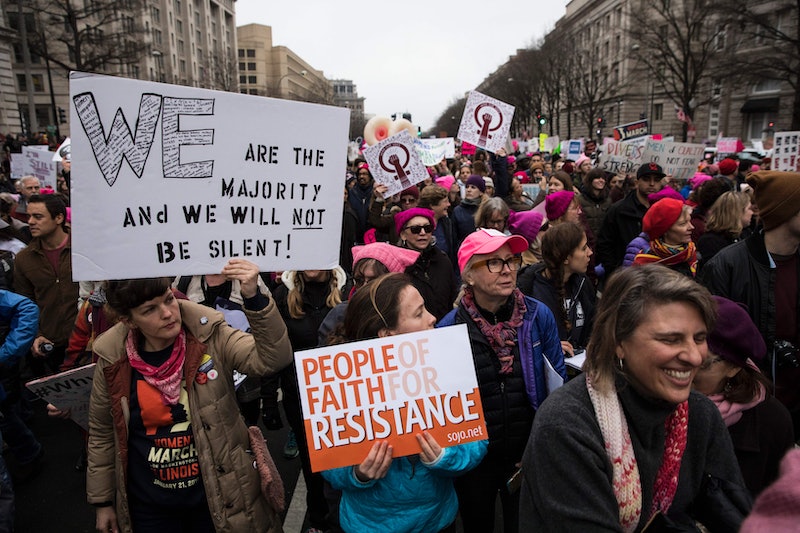 Hundreds of thousands of people attended the Women's March on Washington this weekend. I was one of the many marchers in D.C., and spent some of my time talking with Women's March participants who were new to activism, but joined at what was certainly the perfect time. Their experiences, when put together, tell a compelling story of what it means to be united in solidarity.

I spoke with people of many different backgrounds and ages who came from near and far to attend the Women’s March. Some of them came with friends and family and others came by themselves. But for most participants I spoke with, the Women's March was their first large rally ever. So, what made them choose to become involved in large scale activism?

While everyone had different reasons for choosing to become engaged in advocacy firsthand via the March on Washington, all were united in their strong persuasion to attend the rally and stand up for what they believe in. I was truly inspired through my conversations with all of the newfound activists I met on Saturday, and it is a pleasure to be able to share their thoughts on why they chose to become involved in the Women’s March on Washington.

McGuinness (right) attended the March, her first-ever rally, with her mom. She says she chose to participate because "It was nice to share this with my Mom, who has done this since she was my age living in DC ... And, of course, to be bringing awareness to all of the issues and to make sure that we continue. This is a start to being more involved as opposed to just one action."

The Women's March on Washington was Katz's first activist rally or protest march, though she has previously attended a political candidate rally for Barack Obama. Katz says she came to the March because she "had just done a history project on women's suffrage" which she found "inspiring and wanted to come learn."

The March on Washington is Docherty's first-ever activist rally or march. She says she chose to attend because, " ... Regardless of my political leanings, I cannot condone anyone who is involved in either directly participating in sexual assault or just condoning rape culture and for me it's just appalling. If he [Trump] is going to represent the people, he's got to respect the people."

Aufseeser is from Switzerland and has just recently become involved in activism in the United States. Aufseeser said this is his second protest in the country (the first was a spontaneous protest in New York after Trump was elected). He says he chose to come to the Women's March on Washington because "We have to show our strength in numbers."

In citing the reason why she decided to attend her first rally, Conage says, "For me, it's the spirit that this particular event brings. Yesterday with the inauguration ... the energy was low and I think this is an event ... that brings positivity to the front lines encourages everyone from all diverse walks of life to find solidarity in a cause that feels worthwhile."

Guvney states, "My main reason for coming ... is that we're at a time where the anxiety level is high and there seems to be so much hate talk and hate speech and hate action. I wanted to come to be involved in something positive, something noble, something that was working for all people and bringing us all together ... Also, to kind of stand up against what we would perceive as hate and making steps toward righteousness."

At her first-ever rally, Soferenko says, "I came to the Women's March today because I refuse to accept the idea that a bunch of white, privileged men in Congress I get to decide what to do with my body."

While Thomas says she's previously attended a gay rights rally and that the Women's March was not her first-ever rally, she emphasizes its particular scope and importance, saying,

"...I don't want to look back when I'm older and think why didn't I stand up, why didn't I use my voice. And I think people take for granted the power of a voice and the power of so many people being here. And we're all united and I'm so happy to see so many different types of people. Old grandmas and little girls and little boys ... what amazing lessons that they're learning. Just being able to stand up for something ... At the end of the day we were here ... and we made our voices heard and I can't be sad about that because we did our best."

The Women's March constitutes the first time roommates Poccia and Kingan, of Boston, have been to an activist rally or march, though they have been to political campaign events to support Hillary Clinton and Elizabeth Warren previously.

Of their choice to attend the March today, Kingan says, "I think we were both huge Hillary [Clinton] fans ... and, even before Hillary, were both adamant about feminism and getting more women involved in politics. After her loss we were just really devastated and felt really motivated to come here ... I kept thinking ... if in however many years this is even comparable to the March on Washington and my grandkids ask me about it and I wasn't here ... it's history in the making."

Poccia adds that she came, "Just to have the opportunity to be around people and be around a historical event that I think will live on for a long time ... Also, to be here for our friends who couldn't be here is really important."

Of his attendance at his first-ever activist rally, Rose, who recently re-located to Bethesda from Texas, states, "We're professors and we voted against Trump in the majority. We all have mothers and sisters and we just feel like this is something that needs to be supported."

Cruz also adds, "We can't let him [Trump] know that he has the upper hand. More people voted against his hate speech than voted for him. So it's very important right off the bat to let him know we're here to check you and keep an eye on you, you're not going to get your way."

Of her decision to attend her first-ever activist rally, Sheffer cites the reason as "Everything for me ... Everything it represents. For me kindness is so important and open-mindedness. At the most basic level kindness to human beings —that's why I'm here."

Andrews decided to come from New Jersey to her first activist rally because she thinks it was important to show that "We won't be silent and we're going to be watching out. You can't segregate the entire country."

Most of the women, from Champaign, Illinois, say that this was their first national rally. Wehrmann states that they chose to attend the rally because, "We don't want to go backward in time, we want to move forward ... The Obama administration kept us moving forward. This is just a tragedy to think that that is going to be lost." Several of the women also cite their profession as social workers as the reason why they were especially inclined to attend the Women's March.

Consaul and Frye have been to political activism events before, but say it's been "20 or 30 years since they've felt the need to do this," and, for them, the Women's March marks their return to activism.

Frye adds, "It [the election] definitely made activists out of us," saying that, prior to Nov. 8, she thought that activism was "something she did in college" and had moved on. But post-Trump's election says, "I can't stay still, I can't be quiet anymore; it's time to speak up, gather together, stand up, and do something."

Overall, it was a privilege to learn why and how the Women's March on Washington inspired activism in so many people from many different backgrounds and generations. It was wonderful to see activists of all experience levels come together to advocate for women's rights and I sincerely hope that today constitutes a launching point for many people to continue to engage in concerted advocacy efforts to ensure that everyone's rights are protected long-term.